Tuesday was a damp and dismal day in Congleton. Down in the town a new sculpture, a 2017 installation,  was spotted.

By late afternoon four other boats had moored behind Cleddau at Congleton Wharf,

all facing towards Bosley – all waiting maybe for an upward passage…

Cleddau crept out of Congleton on Wednesday morning.

Just before Biddulph Aqueduct comes the first chance of a glimpse of The Cloud.

For most of the day this significant land feature played hide and seek, hiding in cloud, occasionally peeping out and finally late afternoon revealing herself! 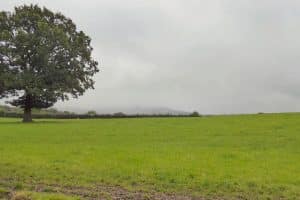 Leaf fall season is starting now – as is the garnering in of harvest produce; here a ladder was propped against an apple tree about a mile from Bosley Bottom.

You can come round a corner (as at Bridge 61) and find beautiful craft moored up, both unfamiliar

– and familiar. By the farm where extensive improvement works have been going on Blanche looks as good as usual,

protected as she is by the painted cow.

How much further to go? Should Cleddau moor up and await lock opening news – or keep going. Might there be a long queue of boats below the locks, all awaiting ascent…?

Curiosity (How many other boats? What does the leak site look like?) impelled Cleddau onwards to the Dane Aqueduct at the bottom of Bosley Locks.

Where was the expected queue of boats and boaters anxious to go up the flight? Nowhere!  Just one little cruiser was skulking at the far (bridge) end of the long stretch of mooring, the rest of which was achingly empty.

Cleddau was moored up, after the Captain had paced the hundred metres or so with his phone seeking the strongest 4G signal…

An hour or so later another boat arrived, a hire boat from Stoke-on-Trent, crewed by three Washington State Americans whose friendship had extended over five decades and had survived many a climbing, camping and canoeing trip.

Time to sate the curiosity: there was Lock 12,

the lower gates supporting even more greenery than three weeks earlier. Above this lock is a wide expanse of water, sufficient to turn a full-length boat.

Then at Lock 11 there was the tell-tale sign of the navigation’s closure,

the paddle gear firmly locked. With a rucksack of dry mixed recycling to offload at the services at the top of the flight Boatwif continued up the (quite muddy) towpath. From lock 5 onwards there was company, one of the Americans, a retired high school English teacher as he explained. Up at Top Lock contractors were washing down a vehicle with a hose pipe.

“Any news on the leak?”  Boatwif enquired, more out of curiosity than of optimism.

“All fixed, the stop planks are out and they’ll be unlocking the padlocks at 4 o’clock…”

Just beyond Top Lock two boats were in line patiently waiting for the flight to be reopened. “Oh, the leak,” said one of the boaters in this surprisingly short queue, “yes, it’s about half a mile on from here.” So, accompanied now by the American trio, Boatwif plodded along, past one or two boats normally moored further away from the flight, past the area where many boaters have cultivated boat-side gardens, past a work barge, out alongside a boat-less length of canal.

“Here it is,” called Ray, one of the trio. And there it was, alongside a very muddy stretch of towpath, a lengthy bulge.

This was the plug in the bank, covered in a lightish coloured material as the top layer to seal in the compacted clay.

With no words to read and no information panel, all that could be done was to walk back to the locks, watch the second boat in the queue begin its downward passage, and continue down the hill and back to the boats.

At 0900 on Thursday nb Isla (the Americans’ hire boat) was untied and it set off on its uphill adventure, the guys having pumped the Cleddau crew for lock operation advice.

thankfully emptied of water by an early bird downboater. 12 locks lay ahead, 9 of which would need to be emptied before use…

Through the now unlocked Lock 11:

The Captain ‘single-handing’ out of a lock.

Onward, crossing with one boat at lock 3 to arrive at Lock 1 where, glory be, volunteer lock keepers had spotted the approach and opened the gates!

Up Cleddau rose, her 2018 Bosley adventures definitely over now.

On, past the evacuated boaters’ gardens,

under Bridge 53 and on past the place where the canal leak had been plugged.

A C&RT ‘Key of Power’ is required for the electrified swing bridge at Oakgrove. (“What, only one car!” mocked the Captain, disappointed at the minimal traffic disruption). A mile further on is one last swing bridge,

On, towards Macclesfield, relishing the rolling views.

Remember when the buttresses on these walls were rebuilt

nb Isla was moored up;

Less than a mile further on Boatwif prepared for vegetation control:  Cleddau was slowed at each of the three narrows behind the AstraZeneca manufacturing plant , where armed with secateurs she spent some satisfying minutes snipping away at recalcitrant brambles at each location.

and the old tower in the woods on Kerridge Hill.

The canal reaches Bollington, and Cleddau slid past the crocodile opposite Adelphi Mill

to find a mooring on the aqueduct, just along from Clarence Mill.

Far below the aqueduct are several neighbourhoods that make up Bollington.

(What is the link with HMS Defiance?

Why are there music notes on a wooden post?)

Once, during an aqueduct mooring on a sunny Sunday afternoon, the very recognisable sound of leather on willow had drifted up from the cricket ground below, heard thousands of miles away by Cal Son via a transatlantic telephone conversation… Any walker down on the path that parallels the canal embankment would have noticed on Thursday the amount of water trickling across the path and into the channel around the bowling green. Yes, the Bollington Leak is still causing concern and now a more extensive repair is planned between November and March of 2020.

Bollington is a pleasant place, with interesting roof lines

“Breakfast tomorrow in the café?” the Captain mooted on Thursday night. Why not, it’d be a last fling on the last day of the Last Fling cruise… The Waterside Café in Clarence Mill

has recently changed ownership but it’s still an inviting and popular place.

Several tables had reserved signs on them, one it seemed for a writer’s script conference with BBC producers.

Back on the boat the final 4½ miles lay ahead. It was another umbrella day (how many there have been this year!) and in places moisture-heavy trees and branches were leaning drunkenly with the weight of water.

Just before Bridge 21 the Captain wove the boat neatly around one more horizontal than vertical clump of foliage, dodged a floating tree branch and proceeded into the bridge hole. There was a sharp jolt, the boat rocked wildly and stopped dead.

“The bridge is blocked,” yelled the Captain, “it’s blocked!” Too right it was…! Across the canal, partly submerged,

but the wood remained too heavy and too unwieldy to pull out of the water. Eventually the woody obstruction was lashed to the side

so at least until C&RT bank staff could clear it other boats should be able to get past. To summarise in numbers, 3 C&RT phone conversations, 2 ropes, 1 fall, 1 grazed elbow and 30 minutes to get through a bridge hole…

Relief. “Thank goodness for that breakfast this morning,” the Captain murmured…

Weary now from a season of (sometimes unsought) adventures, familiar sights began to indicate the boat’s destination was not far away. There was the pretty mooring at Lyme View,

the copse of trees with its mine shaft marker,

the ridge line of Lyme Park,

Finally, with her diesel tank topped up for winter at Bailey’s Trading Post, Cleddau could be nudged into her berth and tucked up safely for winter…

The Whaley Bridge reservoir situation is widely remembered and discussed. Higher Poynton suffered too in those extreme end of July rains  – and because of closed roads, a collapsed bridge and traffic diversions getting out of Poynton by car on Saturday proved almost as difficult as getting there by boat… What a year!

Number of nights spent aboard: 147

Captain’s repairs/improvements during the season: 23 (details on request)