The Black Isle is not an island – and neither is it particularly black. This peninsula lying north and east of Inverness gets its name from appearing dark against the white of the often snow-capped mountains that surround it and the grey and blue colours of the sea.

There are six other homes within walking distance although only the lights of one are visible at night. It is a place of great peace, surrounded by fields, paddocks, a pine wood and with views across a broad valley to the Black Isle’s central ridge line.

This is sheep country; ewes are set to graze near the wood at the back of the property,

while the rams are in the paddock to the south. Many fields on the Black Isle are populated by sheep – and sheep provide huge inspiration for the region’s arts and crafts. In high end gift shops sheep are cuddly motifs; they are witty icons on ceramics and stationery, as well as providers of the raw material for wonderful tartan and tweed clothing, and for bag and furniture coverings.  Of course, to manage sheep you need tractors, trailers – and a faithful sheep dog.

In this part of the world mountains and water feature in the typical landscape view.  Look north across the Cromarty Firth to the snow caps of Mount Wyvis and the peaks of the Northern Highlands.

Ever had an over-big woollen hat that slowly slips down over the eyes? Thus it was in the first week of April as fresh snowfalls fell lower and lower down the hillsides. Just read this (Wikipedia):

Ben Wyvis stands on the northern edge of the Clan Munro country. By tradition, the Munros hold their land from the Crown. The King declared that they held their lands on condition of furnishing a snowball at midsummer if required. This condition they could easily fulfil, as snow was to be found in some of the mountain corries of their property all year round.

A bit further south west is the Great Glen. Here Loch Ness slices between steep hillsides. From Urquhart Castle you could see that the Monadhliath Mountains were dressed in white too.

Journey around the Inverness area and there are numerous views of water. The coastline is so ragged that travel in the past involved frequent ferry crossings. Now you have to marvel at the engineering feats that have provided the elegant causeway across Cromarty Firth and the bridges across Beauly Firth and Dornoch Firth.

built locally at Nigg on the north shore and moored in the Firth ready for relocation to new waters for oil exploration.

Further up the coast in Sutherland lies Dornoch. Was it madness to be driving further north to a beautiful seaside place in conditions such as this…? 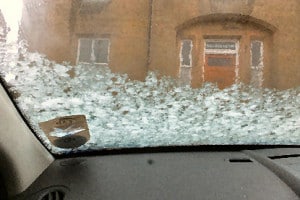 Southbound, across Beauly Firth on Kessock Bridge on Wednesday for a nostalgia day; thirty five years ago with a young family the north coast of the Moray Firth was home territory. Sueno’s Stone at Forres  is now encased in glass,

protecting it from the nearby by-pass. Often from Findhorn beach we had gazed across Moray Firth at the Cromarty Gap,

never seeing what was beyond it.  (But this is the view from the Black Isle side, taken from Cromarty’s beach on Monday morning).

Findhorn’s beach still has its pebble banks. On the other side of Findhorn Bay lie the impenetrably dark pines of Culbin Forest. 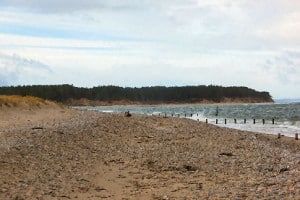 Behind the beach is Findhorn Foundation, a spiritual community and ecovillage,

(It’s well-known and its website has a range of videos outlining its work and its philosophy). Onward then on the nostalgia tour: past Kinloss Primary School,

on to Lossiemouth Lighthouse,

back through Elgin, (Look!

The bookshop is still there on Commerce Street) before looping back west past Brodie. (Boatwif to the Captain: “A photo stop at Brodie Castle…?”

Memories flooded back – one of the viscous sting delivered by a very angry wasp). On leaving Brodie the clutter of signs was a reminder that this is  the territory of The Scottish Play, Cawdor Castle being only a handful of miles away.

Weather watchers will know that conditions in Scotland can be extreme.  After three days when rain, hail, sleet, wind and snow had been hurled from the skies how delightful it was to experience one calm and bright day. Could Urquhart Castle,

perched on its promontory mid-way along Loch Ness, have looked more fetching?  Site of power struggles between the MacDonalds and the Crown, of raids, sieges and massacres, the castle is a romantic ruin. In the 19th century Urquhart Castle was popular with painters, but now it’s a destination for visitors from across the globe.  A distraction from the impressive Grant Tower and the rugged remains of the upper bailey were the boats breezing to and fro along the dark peaty waters to deliver visitors to the castle site. 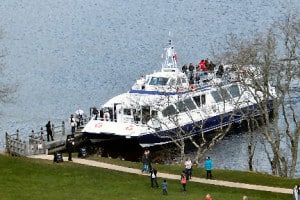 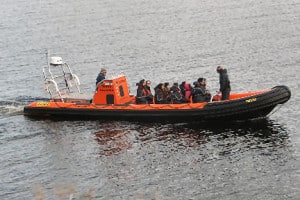 a route that via canal cut and natural lochs connects the Irish Sea on the west coast with the North Sea on the east coast.

Though no boats were transiting through the locks

The most famous resident of the Loch Ness region is of course Nessie… not at all monstrous she is depicted here bedside the bottom lock as a frame for a floral sculpture.

At the day-trip’s end came a stunning high level drive along the Great Glen’s south side back to Inverness.

From Inverness south to Edinburgh is a three and a half hour rail journey.  Think of those traditional Scottish scenes: moors and mountains, heather and lochans, bogs and moss, boulder-strewn burns, snow-packed gulleys, splodges of dense green forestry.  This is wild untameable territory. When the train slows you realise that Scotland’s become Gallicised in recent years; you stare out at the railway station signs: Kingussie in Gallic is Ceann a’ Ghiuthsaich, Pitlochry is Baile Cloich Ridh while Kirkcaldy is Cair Chaladain…

Many hours and two more trains later Boatwif and the Captain were back home, at 52º North. No firths or coast or mountains in these parts – just the garden heather to act as a memory prompt for a glorious Scottish sojourn…