Yet another good idea from Cheshire Mum: “Why don’t you join us in Wiltshire for a few days in the Easter holidays and then do childcare duties after that?”

That simple suggestion involved an east to west and back again criss-cross of the country and a struggle with road routes.  But out west, not far from Devizes, there was a surprise. Right outside the appropriately named Lockside Cottage is Lock 21 of the Kennet and Avon Canal.

Whenever novice or exhausted crews appeared bewildered or in need of assistance there was a helpfully supplied windlass at the cottage so you could go and lend a hand.

for some Wessex friends – and Lock 21 right beside the garden gate proved a useful visual aid for visiting youngsters.

There was an unplanned benefit too:  while not actually travelling on a boat, Boatwif was able to prove that the wrist broken six months ago is fit again for lock duty.

For nine years Cleddau was moored on the Kennet and Avon Canal, some 46 miles east of Devizes.  Should this summer’s plans come to fruition Cleddau will again face the broad, heavy K & A locks, again climb the Caen Hill flight,

Two of the Wiltshire days, however, provided chance for retrospection. Cheshire Mum was keen to reminisce for there had been a Wiltshire stretch in her childhood. From Devizes to her one-time home is via Salisbury Plain and Stonehenge . The ugly old Stonehenge reception area has been demolished and a fine new one built unobtrusively a mile or so away.

Free buses run between the new Visitors Centre and the Stones, where, aided by helpful signage and audio information, visitors stroll around the site, intrigued by what they see.

From Stonehenge to Amesbury is a bare two miles. “Look,” Cheshire Mum called out to her daughter, “there’s my junior school, there’s the library, this is the hill we used to catch the bus up, there was a sweet shop at the top… That’s where I lived, that’s the road where my best friend lived…”  It was the same, but different. How often is that true when a couple of decades later a one-time home is revisited. Gone was the huge sports field, covered now by a vast housing estate. Realigned were the access roads, making way for a new sports facility – and more housing.

Reminiscence Day continued. The fireworks factory on the way to Salisbury was recalled, then, via a sharp right turn up a steep narrow lane, a wonderful picnic site was reached: Old Sarum Castle.  This hilltop site overlooks the beautiful city of Salisbury (New Sarum). Most of the stonework from the Norman stronghold days has gone now, but there is plenty to explore and speculate about.  Gaze down from the upper ramparts at the clear foundations of the original cathedral;

see how very steep and deep the dry moat is. 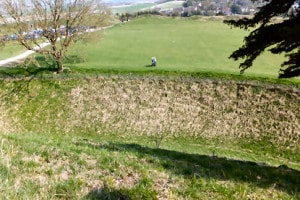 Then look south, out across the valley and see two miles away the magnificent spire of Salisbury’s new cathedral.

– there to meet an airy oasis of calm.

The spire, the highest in Britain (at 123metres /404 feet) soars elegantly skywards.

How stunning is the spire’s triple band of decoration.

This immense building is breathtakingly gracious and graceful, the main body of the cathedral being built in just 38 years in Early English Gothic style. Walk the cloisters,

– and sense the tranquillity.

Often, in years gone by, a westward route to the Severn Bridge and Wales had taken the Cleddau crew through Bath, past a curious sign for the American Museum .

Opportunity then to pay it a visit.

Opened in Claverton Manor in 1961 the Museum has displays which chart the history of settlers, colonists, the American Revolution, Native American culture,

the Civil War as well as some twentieth century detail.

Textile enthusiasts surely will appreciate the large display of exquisite quilts on show while the seven period rooms reveal  fascinating changes in fortune and in style.  If you have either detailed knowledge of the States or just a passing curiosity you could while away many an engaging hour here in the museum and in the delightful Manor grounds.

After three nights the nostalgia trip had to come to an end. The words of Techno Son-in-Law rang in the ears. He is, after all, a man of direct opinion. “I don’t see why you could write a blog about Scotland when you didn’t actually go on a boat,” he’d said. Well, this post has featured locks and lock operation – and since which the Cleddau crew and the Cheshire One have sat on nb Valerie and driven north to nb Cleddau. Furthermore, this post has been completed some two miles down the Macclesfield Canal at Lyme View – yes, via an actual, a real, a firsthand, trip on a boat…!