“Any advice?” the Tentatrice First Mate asked the lock keeper on Thursday afternoon.

“Well, wear life jackets, have your VHF radio set up, have your anchor tied to your boat, put your kettle in the sink – and…” (with a sideways look at Monty, the Tentatrice Boat Dog) “your dog in the washing machine…”

All preparations had been made

and by 1030 the boats and boaters were ready to go.

Into the Limehouse Ship Lock.

On the other side of the gates, beyond the road bridge, tall masts rocked. Two yachts were waiting outside to enter the Limehouse Dock. The two narrow boats dropped fast to sea level. The gates opened and Tentatrice had to go first, to avoid the yachts.

Once the bow rope used to secure the boat to a vertical wire inside the lock chamber had been retrieved the front canvas (“cratch”) could be zipped closed. The boat’s defences against water incursion complete, a retreat could be made to the back deck.

Slap, slap. The waves seemed about a foot high.

The sun glistened on the water and at least at first there were no dreaded RIB boats giving fast thrills to their passengers.

Tentatrice was out mid-stream.

Head the bow into the wash – that had been the advice.

On the stern hatch lay the GPS. “What’s the speed?” called the Captain.

First catamaran to the left.

First sighting of the Gherkin.

The tug had caught up, overtaken the narrow boat flotilla, its barge high in the water.

Church tower to the left – isn’t that in Bermondsey?

Onwards, past Wapping Pier and a fleet of police boats.

Then into view came the Big One.

It was the first bridge, the first of 25 before Brentford. 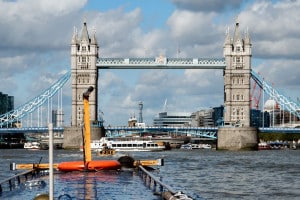 Crowded! Crowded was the view, mobile waters below the hull, boats moored before the bridge, a passenger trip boat and just beyond was the steeple shape of the Shard soaring skywards.

From behind came a RIB, fortunately passenger-free.

The building shapes intrigue: there was the Walkie Talkie

(20 Fenchurch Street) and another glimpse of the Gherkin.

The Captain was lining up on the central arch of Tower Bridge.

A trip boat came through; behind it another trip boat turned, the wash from the two boats colliding.

Instinct took over: feet were dug into the deck, legs stiffened and fingers gripped the hatch slide rails. Hearts were in mouths as the boat pitched and dug, pitched and dug.

Snap, snap with the camera: Tower of London on the right,

HMS Belfast on the left.

Next bridge coming up – London Bridge (helpfully named under the arch).

a glimpse of St Paul’s Cathedral on the north bank,

the Globe Theatre  on the south bank.

Here was an extraordinary sight – a camouflaged boat if ever there was one: it’s HMS President (current role unknown).

Still the catamarans ploughed by – and then came the first sighting of the London Eye.

Cleopatra’s Needle sits on the Embankment.

Next was the unmistakable profile of Big Ben and the Houses of Parliament.

River traffic must adhere to a 70 metre exclusion zone away from the Palace of Westminster and marker buoys indicate the length of the exclusion zone.

Going upstream boats must use the third arch at Westminster Bridge. Again navigation was made difficult here: a tourist catamaran turned round, stopped and blocked Cleddau’s access to the third arch.

(“Honest guv, we didn’t mean to break the rules…”)

On Cleddau and Tentatrice cruised,

and crossing with craft of all varieties.

The skyline, still dramatic, was no longer shaped by the familiar and the famous. Flats at Vauxhall Bridge,

a pagoda near Chelsea,

And what beautiful decoration there is on Battersea Bridge.

The old complement the new.

The vast Battersea power station is undergoing a makeover;

there’s an exercise in geometry nearby

– and more geometry further up at Wandsworth.

A river view is much prized of course, for apartment residents and perhaps for customers at this pretty pub .

The river is a workplace. The tug that had come up from Greenwich had unhitched its load. A crane rolled along the dockside to move containers onto barges.

a vessel dedicated to counteracting pollution by pumping oxygen into the river water.

while opposite is Fulham Football Club.

Wow! Here was Harrods, in Barnes.

There was no more trip boat hassle – but a glorious four mile cruise up the Boat Race course to Mortlake. The channel is narrower, it was the slack water point of the tide and conditions were benign.

Two hours and thirty minutes after being dispatched from Limehouse Ship Lock,

after Kew Bridge, the white twisted shape on a pier indicated the entrance to Brentford Cut.

Thames Lock hove into view. “You know what’s going to happen next – and what the answer is…” breathed the Captain.

Bang on cue a lock keeper appeared. “Have you got a Canal and River Trust licence?” he hollered.

“Yes we have,” both Cleddau crew members replied in chorus. “And so have the boat behind,” the Captain added.

It had been done – London had been ringed and the boats had returned to the very place where they had arrived from Teddington five days earlier. Jubilation, triumph, survival relief, emotional fatigue. It had been an unforgettable cruise on serious and busy waters, past iconic structures and breathtaking modern constructions.

The achievement – and the relief – did not go unmarked… 4 locks and 2 miles further on the boats were moored and a double celebration held aboard nb Cleddau; it had, after all, been a rather special birthday trip for the Tentatrice First Mate!