Chance has allowed a couple of North Cheshire Away Days.

The Cheshire One had spent part of half term down in Bedfordshire.  Mid-week a Virgin train whizzed her and Boatwif back to Macclesfield from Milton Keynes. The Captain drove up later and tackled the top Must Do Cleddau job, a boat wash.

A germ of an idea had formed in Boatwif’s mind: perhaps just a gentle little cruise, just to Marple, only about 90 minutes further north, then a walk down the Marple Flight to the bottom… maybe?

The idea took root – and by early afternoon on Wednesday the boat’s engine was teased into life. For the last couple of years nb Chrysalis has been moored up beside the towpath opposite Cleddau’s home berth. Now it has gone, a fibre glass cruiser being moored in its place. 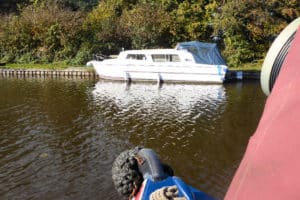 Slowly Cleddau was motioned forward – to bear left. There was no nudging of the cruiser – and no collision with the anglers perched on the towpath edge… Not far along the Deeps (local name for the wide stretch of shallow water) was a surprise boat: Gloriana;

it was in Hungerford in July 2015  that her owner had organised troops of small children through Cleddau and two other boats. She is a long way from home now … About a half mile south is the winding hole, where another boat was already manoeuvring around. 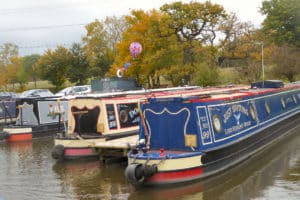 Cleddau headed the 3½ miles towards the junction of the Macclesfield with the Peak Forest Canal. Somewhere before High Lane Cheshire bleeds into one of those anonymous sounding administrative names, Greater Manchester.

Somewhere here too six intrepid canoeists held back at a bridge hole, preferring to wait than to compete in the bridge hole with a narrow boat for a narrow space…

On the edge of Marple is the vast Goyt Mill,

built in 1905 as a steam powered cotton spinning mill. On through the town’s outskirts, past the controversial new builds

and the New Horizons trip boat to the Junction

– and to a prime mooring

Paddle gear when it’s being operated has a very distinctive sound – and late Wednesday afternoon that metallic rattling sound was heard.  Nb Brock from Lyme View was coming up the flight,

bound for Bugsworth after a trip up to Upper Mill on the Huddersfield Narrow Canal.

Thursday morning came – now was the opportunity to walk down and back up the Marple lock flight.

This town is in the Metropolitan Borough of Stockport, yet nothing seems metropolitan about the towpath walk down the lock flight. An initial terrace of houses and then old canal side buildings further down are easy on the eye.

To the north east there are frequent glimpses of the Peak District hills.

The trees were in stunning colour and where leaves had drifted to the ground there was a crisp underfoot carpet.

A Canaltime hire boat was ahead, working down the locks. 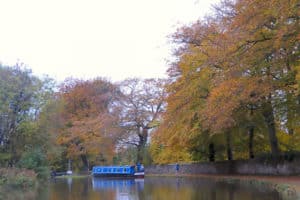 Surges of water were pouring down the flight, exiting as white water torrents from the by-wash below each lock.

Several local walkers expressed consternation. “Never seen it like this before,” said one. They stood, scrutinising (unsuccessfully) an information board for a Canal and River Trust phone number. On their behalf the Captain rang the C&RT number lodged in his phone to report the concern…

there was the first sighting of the Marple end of the railway viaduct.

There it is, standing even taller than the impressive aqueduct. Far below flows the River Goyt. 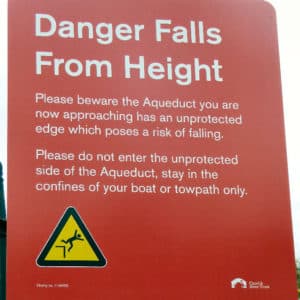 One side of the aqueduct has a towpath and the protection offered by a stone wall – the other doesn’t!

This is the highest canal aqueduct in England and the highest masonry-arch aqueduct in Britain. The difference in water levels in the river and canal is some 90 feet (27.4m) (exceeded only by the Pontcysyllte aqueduct, an iron trough carried on stone columns, where the difference is 126 feet (38.4m)). (Wikipedia)

The last time Cleddau came this way (2012) the crew’s view of the aqueduct’s structure was very limited – just the towpath, the wall and the water-filled channel.   Recently though tree clearance at the base of the aqueduct has revealed the stonework

and a 50 step pathway

down allows for close up views of both the aqueduct and the viaduct.

In 1860, (see Wikipedia article) to overcome frost damage, bracing was added to the stone arches, presumably to stabilise and strengthen the structure.

Back up the steps; back to a glimpse of a farmhouse framed by a viaduct arch;

back to the world of trains and boats…

And fire engines too, it transpired. There had been the sound of distant sirens: the fast flow of water was at the request of the Fire Services who needed copious amounts to fight a blaze further along the canal.  A windlass-waving home owner was at Lock 2, winding paddles fast, flushing away the rising water level about to threaten his home. The moments passed, the by-wash flow decreased. One canal side house was saved from flooding – but 11 luxury new homes were destroyed. (See here).

Back up the hill, back up the 209 feet incline, back past locks operational since 1804, back past stunning foliage and autumn colour.

Early afternoon it was time to head back, not even as far as Macclesfield,

but just to Higher Poynton.

From time to time the sludge of leaf soup needed clearing from the prop.

Bursts of reverse on the throttle, then onward, onward past the much loved miscellany of items at Bridge 15,

past the Cage high in Lyme Park sighted from a distance,

back to home moorings.

A sharp wind made the reverse onto the pontoon interesting: Boatwif was poised on the bow to fend off from the white cruiser when its owner enquired whether everything was alright – yes, it was, fine –  provided his boat remained unpunctured…

Early Thursday afternoon Cleddau was back after a 7 mile return trip, back from her very last little cruise of 2016, back at 53N 2W.