Memories along the T and M

Is your mind startled by a location trigger? Back in Cleddau-land in far West Wales there’s always a smile brought about by coming across Auntie M’s bridge-hole at Lydstep or Auntie G’s corner near Stackpole. Travelling along the Trent and Mersey Canal stirs memories too: it was beyond the eastern end of this canal at Sawley Marina that twenty years ago Cleddau was purchased (see previous post). Burton-upon-Trent – it’s the home town of a colleague who now lives in New Hampshire, USA. At Branston in 2011 Falklands Friend and The Sister leapt aboard for a few happy hours. Geese

over the Water Park were reminders of those spectacular late summer scenes over Findhorn Bay on the Moray Firth. Then a surprise boat name Pendine

brought back memories of Sunday School outings and the hard sands that allowed attempts at land speed records.

Saturday. Well, what is it like to cruise between Willington and Alrewas? Noisy, mainly because of the A38 trunk road and the railway line which runs pretty close by the canal. The boat route crosses an aqueduct over the River Dove near Stretton, passes a semi-detached house with an amazing extension,

some quirky items beside a Stretton back garden

and arrives at Burton-upon-Trent. A mural at Dallow Lane Lock highlights Burton’s history as a centre for brewing

and if you’re a Marmite fan (ugh!) you might already know that the Marmite Food Extract Company was formed in Burton in 1902. Once through Burton and past the Cors chimney

and the Marston’s brewery 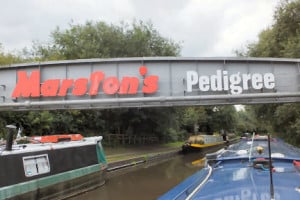 low green hills to the north west of the canal

make it an attractive landscape to cruise through.

Moored on Saturday afternoon by a gap in the hedge, the towpath access to Branston Water Park, it was a joy to walk round a one-time gravel pit and see the pleasant country park it had become.

The unexpected became a theme for Sunday: queues at locks,

a dog (nicknamed “Asbo”) which at two locks jumped on Cleddau’s roof – and couldn’t find its way off,

the articulate and charming teenager out for a last cruise and fishing trip on the family boat because Mum and older sister were no longer interested in it, a neat row of watering cans hanging beside the tap in the Alrewas churchyard,

a pretty cottage glimpsed through a gap in a hedge.

But the mooring at Alrewas was to allow a return visit on Monday to the National Memorial Arboretum.  Local advice and a check via Google Maps confirmed the walking route: grit your teeth to cross the A38, walk over the railway crossing and past the quarry and in just under half an hour from the canal you are there.

The Arboretum provides a location within the growing National Forest in Staffordshire where the focus is Remembrance. Every day of the year at 11am a simple act of remembrance takes place in the airy chapel.

The chapel’s design is such that here, and also through a gap in the massive walls of the Armed Forces Memorial,

at 11am on the eleventh day of the eleventh month a ray of sunshine will fall. The public are becoming increasingly aware of the place and now the 150 acre site, with over 300 memorials, is visited by 300,000 people each year. Even if you have no personal connection with any of the names on the Armed Forces Memorial or the Basra Wall or any other military or civilian organisation you are likely to marvel at the memorial designs, connect with the anguish of the bereaved and feel respect and gratitude for the brave.

The place is full of symbolism: a tree in the Garden of Innocents is dedicated to Anne Frank’s memory and is cropped of its blossom each year so that, like her, it will never reach maturity. Of course a visitor might choose to ignore all the badges, symbols and words – and yet still will be impressed by the beauty and tranquility of this place.

Mid-afternoon Cleddau moved on, just 2 miles and 4 locks up, to discover – amazingly – an available space on the visitor moorings at Fradley Junction.

(Onward on Tuesday, through Rugeley at least to Taft Bridge, possibly to Tixall Wide.)