Messing about on a boat 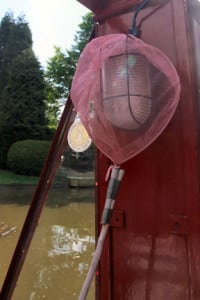 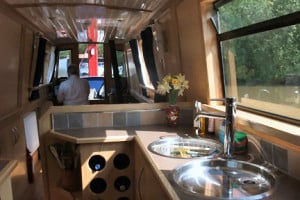 Messing about on a boat gives an impression perhaps of those Three Men in a Boat, struggling to complete a camping boat trip on the , or of punters poling their way past any number of Oxbridge colleges.  Well, camping no, poling yes – and a great deal of mess – and messing about.

We had arrived on the boat early on the Thursday afternoon of the Easter weekend. It was glorious weather and boat owners at the moorings were variously sunning themselves, polishing their brasses or towpath talking.  While the Captain joined in the towpath talk Boatwif went caving, down in the “Historic Quarter”, the un-renovated area at the back, underneath the dark and dusty bed. What finds!  A lifejacket once found on a beachcombing expedition, a piece of metal possibly intended as an extra BBQ grill, a pair of long lost pillows – and two foam seat cushions, in brown nylon tie-on covers, probably once part of our LYS 830E Volkswagen camper van. (It is of slight concern to realise that the registration plate of a vehicle owned in the late 1970s is still recalled, but the exact combination of letters on a present vehicle can escape the mind…!)  Yet again trips were made to the local waste centres, but at last, despite Henry (the Vacuum Cleaner) twice going into a long and deep sulk, much of the muck of ages and the sawdust of recent months was swept away.

Next day, Good Friday, dawned warm and slightly hazy.  Cleddau was inched out of her mooring and her bow pointed north. Off up the Macclesfield we chugged, bound for the . Within five minutes of departure the Captain called for the new gadget:  “We’re doing 2.8 mph,” he pronounced, gazing at the handheld screen, “now 2.5, ooh, now …” and so on, as the boat continued up the cut. The walker doing a steady pace out walked us, then paused for refreshment. She caught up with us. “You’re walking at 3.5 miles per hour,” was the information (unsolicited) issued from the back deck.  But by the time we had negotiated our way past moored boats and trip boats at the canal junction she was well ahead – and positioned herself comfortably ready to hail our slothful pace about a half hour later.

At there was (Pembrokeshire readers will know what is meant) a Monkton Moment. Coming towards us through a bridge hole was a maroon coloured boat, its skipper on the back in full voice. “Ooh, Cled-dow (sic), from you are. There were two ferry boats, the Cleddow Queen and Cleddow King, Pembroke Dock they were. Now there’s a bridge…”)  And the Captain, who has much to contribute on this subject, struggled to get even a syllable in, let alone heard – and the boats passed, parted and cruised away from each other.

The overlooks the and far into the area (for description see blog entry ). On this rather hazy day the outlines of the hills were apparent, although not sharply defined. The canal was busy with boaters and canoeists: of the four bridges to be worked only one fell to us. We turned left to head into , intending to moor in our favourite secretive spot and quietly tidy and wash the boat. On one previous occasion there were eight boats moored around the basins and arms, but often it has been only one or two others. Surprise then to cruise straight into the Easter Meet of the North Cheshire Cruising Club. By Sunday 70 boats had crammed themselves into Bugsworth! Deckchairs were arranged outside the boats, flags and bunting added further colour to the scene, a marquee was the Cruising Club’s HQ and venue for the evening jollities. And on Saturday afternoon entertainment was provided by big boys with small boats, competing with their radio controls over circuits of the middle arm, boats and ducks vying for the same stretch of water.

Our attempts to moor had been hampered by lack of space and shallow water: hence the first of three long pole incidents.  When moored the Captain deemed that the boat mess (external) needed to be cleared. Cleddau‘s rich colours had paled under layers of thick dust and, in some places, sticky tree substances.  So efforts with water, a bucket, chamois leather, windolene and several dusters eventually enhanced the boat’s appearance.  Before departure the Captain had specially “customised” cardboard window blinds. Now inside critical measurements were taken of the windows and the cupboard interiors. On the To Do List: internal storage solutions to be sought and blinds and curtains to be sourced. If not a flight trial or a test drive this was a check-out cruise. Plan A for grocery storage didn’t work as a double-door cupboard would provide easier access; Plan B threw up another potential problem, the area perhaps too warm from the fridge and hob above.  So, after onboard consultation with Cheshire Mum, a Plan C has been devised.

When not measuring or boat washing or towpath-talking little wanders of the surroundings were taken. The Captain strides down the towpath, greeting all with a hearty “Good morning.” Most folk respond in kind, although one or more looked startled, as if they should know this chap, but couldn’t quite place the face.  Up in Buxworth village a blackboard advertised plans for Royal Wedding community celebrations and the church notice board provided details of an early Easter morning service.

The Cheshire Three were on board on Monday to escort us back to our moorings. First, however, a little diversion onto new waters. The terminates some half mile further along, at . Here the Cromford and High Peak Railway delivered limestone to the transhipment shed for onward transport by water. Beside that last stretch of the we have walked and we have driven, but not cruised. So from the junction of Cleddau was turned left, onto unfamiliar waters – there to meet a pirate ship, equipped with tall flag padding straight towards us! Perhaps it was the sunny day that dissuaded the ferocious pirates from making a hostile landing upon our craft…

Tied up back on the pontoon by mid-afternoon there was time for more towpath chat. It had been a scenic and a useful cruise. What’s more, the Cheshire One, taller now than last year, has checked out the dinette for bounceability, supervised the steering from the back deck – and fished and rowed again with her pink fishing net.