Christleton to Calveley: 11.2 miles, 6 locks
Retracing a route allows views of familiar things from a different angle. Today’s course involved first the eight mile long lock-free pound from the Chester outskirts to Wharton Lock. Whereas on Saturday the route was boated in gentle sunshine, today the morning skies were leaky and the air chilly. Gloves again! The houses in the village of Waverton have those pretty gardens

– and the one with the boathouse.

Slowly the boat cruised past the Golden Nook farm moorings. There was a friendly wave from Juno Jesemla’s owners; he had cheerfully shared locking duties in the heavy rain yesterday. Their boat’s name involves the family’s five names – can you guess them?

On past the mile and more of the moored boats and then the ridge of hills begins to appear.

Through the hedging there are glimpses of the castles, Peckforton (in private hands) 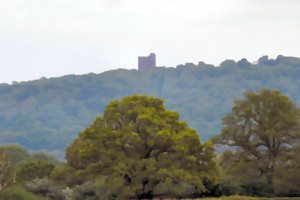 and Beeston (open to the public).

Then comes the plain, the railway line and Beeston Castle’s sheer rocky outcrop.

There was a diesel fill-up at Chas Hadarn Boats and then the next lock, Beeston Iron Lock. This was a frustrating experience: the chamber narrows so one boat only is recommended, the current below the lock is pretty fierce – and it was here that a vociferous stranger materialised, one full of opinion and advice, keen to see action with someone else’s boat. Boatwif towpath-trudged up to the next two locks, eager for chance to escape know-all navigators and for a decent walk. To the right was a private fishing lake, a fly fisherman engrossed in his sport.

To pass through the next two locks with a sane and sensible crew became a pleasurable contrast! On the canal goes, creeping through woodland, the birds in full chorus.
Bunbury Staircase Locks looked unusually quiet. All the Anglo-Welsh hire boats, bar one, were out on hire. The Captain jumped off – was gone a long time. The skipper from the boat ahead jumped off, tied up, was gone a long time… Just dog  walkers passed by. Eventually water burbled out of the bottom lock and a boat emerged. The skipper ahead reappeared, then moved his boat into the bottom chamber. Boatwif clambered back on board Cleddau and smoothly went in alongside. From the lock side the Captain began to issue instructions, then “You tell her!” he said to other skipper.
“We’re sharing locks, there’s one coming down… have you got a bow thruster…?” Slowly it dawned: in the lock above was a boat coming down

while below we were two boats going up… No bow thrusters, Cleddau ten feet longer than the partner boat. The plan was formulated: Cleddau would move into lock 2, the partner boat would slide across into Cleddau’s space,  the down-coming boat would slide into lock 2 , Cleddau would slide across lock 1 and the other upcoming boat would then move into lock 1… and the plan worked! New trick – passing in a broad staircase lock and two locks full of water saved!
Late afternoon and a sunny mooring beckoned. While the Captain tried to rid the engine room of excess rainwater Boatwif baked some boat cakes. Time for supper – some simple (Chester market) venison sausages were on the menu. The Captain produced a bottle of red: “Listen,” he said, reading the details on a bottle of Passero 2011,” …it’s the perfect wine to enjoy with classic Italian dishes… grilled sausages and a selection of cheeses.”
Only the rattling past of nb Sloe Mo Shun detracted momentarily from the pleasure of the late evening sunshine

and the triumph of a new trick learned…
Tomorrow: towards Nantwich.