North – and west and north again (plus a MM*)

At 1120 today Cleddau drew out of the Milton Keynes Marina, turned left and started Phase 5 of the summer cruise, now heading back to the Macclesfield Canal.  The views were familiar since only two days ago there had been a sunny boat trip this way with neighbours

and an outdoor lunch at the Black Horse in Great Linford. 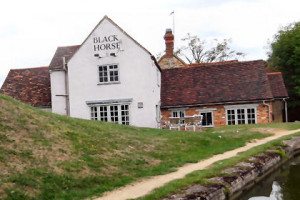 was a surprise gift from Tuesday’s trainee helmsman!

Passing the familiar parks and play areas there was time to reflect on the last few days. There had been another glorious weekend with the Cheshire One and the Californian Three. What sweeter words can there be than “Will you play with me Granny?” spoken in a soft Southern Californian accent… There was bouncing and balancing,

picnicking and playing, reading with Grampy,

and a Science Discovery Centre in the forest to remember.

Then there was a walk on Wednesday with friends and a sighting of John Bunyan,

On through Milton Keynes; there is an aqueduct over roads and another a couple of miles later over the Great Ouse.

There’s an extraordinary contrast at Wolverton, the railway town.

It is quiet, there being no sign of human activity among the modern apartment blocks

though the silence is pierced frequently by the shriek of the fast Virgin trains.

OnCleddau cruised through Cosgrove and the one lock on this stretch; under the lovely Gothic style bridge

and into the tranquil Northamptonshire countryside. There was a whiff of wheat and earth from the newly harvested fields and a glimpse of a church tower up on a slight rise.

Moored up late afternoon near a minor road leading up to Grafton Regis there was time to explore. This quiet village, known just as Grafton, had been a favourite summer hunting ground of Henry VIII. Here his grandmother was born and a crucial part of English history played out: remember the business of Henry wanting a divorce from Catherine of Aragon? Annulment discussions were held here at Grafton House, “Regis” was added to the village name at the king’s command and later Elizabeth 1 visited several times. Grafton House (by then more like a palace) was destroyed in 1643 during a Civil War siege. To think this quiet butterfly-loving place 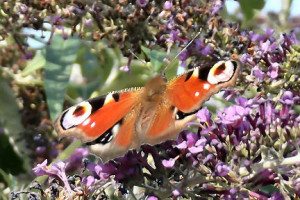 has seen so much political and royal activity…

About a mile and a bit ahead lie the Stoke Bruerne locks, so tomorrow is a locks and Blisworth Tunnel day.
Monkton Moment*:
“Great name for a boat,” announced a moored up boater.
“Cleddau –it’s the name of a ri…” started the Captain
“I know, I know, I used to live in Dinas Cross…” replied the surprisingly distinctive Scottish voice!