It’s 46½ miles (and 48 locks) between the home moorings at Higher Poynton and Anderton, the access point to the River Weaver.

With wet weather forecast to dry up by midday on Friday the Cleddau crew, moored at Rode Heath, busied themselves inside the boat during the morning until a clearing in the weather appeared. The Captain fastened the cratch canvas sides back to make access on and off the bow easier and the boat was soon ready to get underway.

“It’s chilly outside,” said the Captain. “Best put on a windproof.”

So Boatwif stuck her arms through the sleeves of her lightweight waterproof and jumped ashore to set Lock 53, a hundred yards or so ahead. As she reached the lock (one boat already entering the lock, the crew of another appearing with a windlass) giant drops of rain began to fall. The coat was zipped up.

In a moment the giant drops transformed into wild sheeting rain…

Boatwif retreated to the boat to find a peaked cap for beneath her hood.

Soaked she was. Soaked trousers. Soaked coat. Soaked front deck. The Captain meanwhile, one hand on the tiller, sheltered under his vast umbrella.

Inside the boat Boatwif resorted to the longer, heavier jacket, pulled on the gaiters, secured a peaked cap under the hood and waited – and waited.

The deluge eased somewhat – and the Captain moved the boat into the lock, the gate still open after the upcoming boat. Gradually the rain lightened and with the greatest of care the crew managed to operate the boat down through the two Thurlwood locks.

There’s about a mile after the Thurlwood locks before the two Pierpoint locks are reached.  With the first only a few yards away a sudden squall hit. The Captain wrestled with umbrella, tiller and reverse gear. In a tussle against the wind the boat was brought alongside the lock landing and tied up at the end. In what was proving a slow and difficult day two locks had been completed, a bare two miles cruised, the front deck was awash and already crew members were wearing their second jackets.

On such a seriously 2W4C* day photographic evidence does not exist, not of the charming painted mangle in a Rode Heath garden, not of the bright floral colour in many canal-facing gardens, not of the well-kept garden huts or the pleasant outdoor seating areas. Unlike the gardens of the Macclesfield Canal animals are hardly represented at all, although there was an extraordinary encounter with live creatures further down the locks…

By Lock 57 the noise from the M6 motorway is unmistakeable. By Lock 58 the traffic roar hastens your determination to move on and away.

At Lock 60 the Captain was ashore as lock operator. This is a twinned lock but the offside chamber was to be used. There seemed to be two white dogs at the far end of the lock, though no owner was in sight. As the Captain arrived at the lock side two other windlass wielders appeared from the lock below.

Were the eyes seeing dogs – or, really, could they be goats…?

“GOATS!” the Captain yelled back, waving his arms to indicate the lock was ready to enter. At the far end the other wielders had crossed to the other side. One of the goats seemed very affectionate, nuzzling itself against one of the women. The other goat was seemingly curious about the paddle-winding process and plonked itself right in the middle of the lock chamber bridge (oh for the camera close to hand!)

The water level began to drop, as did the boat. Up on the bridge the goat still surveyed the operation.

Then came the time to open the gates. On his side the Captain opened his with relative ease, on the other the goats and the women were all in a muddle, the goats obstructing any movement of the gate. There was some tickling of a goat’s neck and it seemed to move back – and eventually the one on the bridge dived under the arm of the gate and the two slipped away round the corner of the brick bridge…

As the boat left the lock (in now dry weather) Boatwif retrieved the camera from below. Had that all happened? Stunning pictures sadly missed!

locks to Wheelock. At the end of July, see next picture, 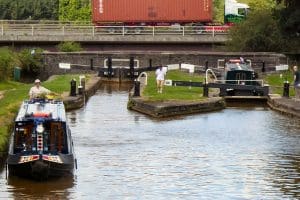 progress up these locks had been very slow due to the number of other boats; now though the final towpath side lock is out of action, awaiting repair. 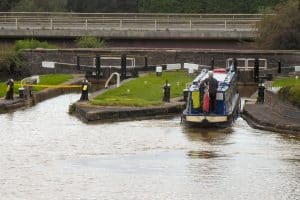 It was a quiet night at Rookery Bridge moorings, except for the occasional train. Twice skeins of geese gathered overhead in wonderful V-shaped formations. Autumn is surely on its way…

The next day of the cruise, to Middlewich or thereabouts, was completed in dry weather (what a change!) and such was the contrast from previous days that novelty photos of blue sky and fluffy clouds were taken… 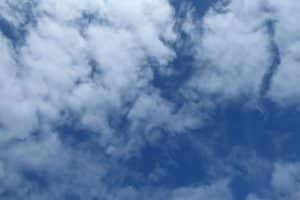 Cleddau cruised down 9 locks over 5 miles, meeting upcoming traffic at all but one lock. The house building on the Middlewich outskirts is continuing  apace. 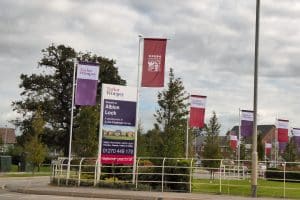 Was this block here in July? 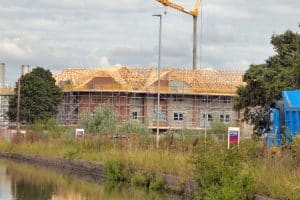 Middlewich of course is salt territory. 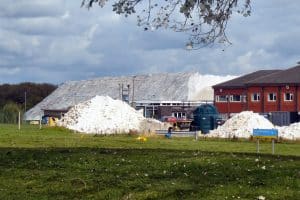 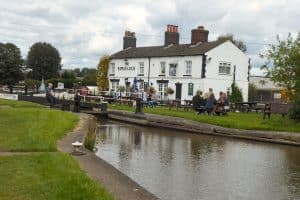 Right opposite King’s Lock is the well-known Fish &Chips shop, 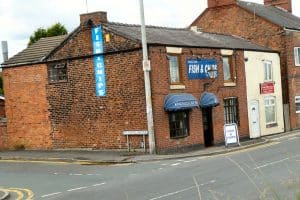 food source for the the Wash Crossers fish ‘n’chip supper just six weeks ago in July.

Refuelling at the chandlery below King’s Lock is often a tricky business, with traffic to and from the entrance to the Wardle Canal (see archway ahead) 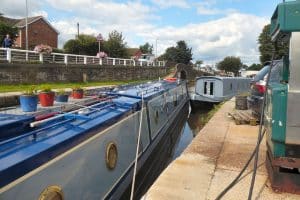 as well as to the lock behind. Service is rarely swift … and progress was snail pace again a bit further on at Big Lock. 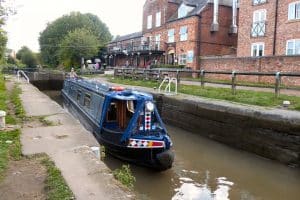 Beyond Middlewich, after the first of the flashes, 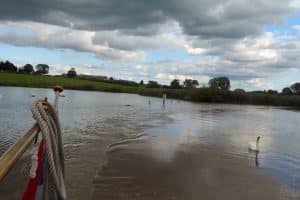 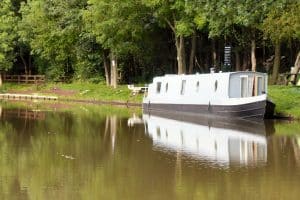 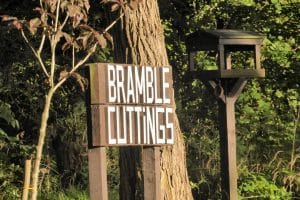 a peach of a quiet mooring place. It’s offside, 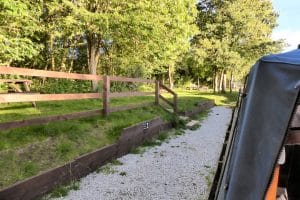 safe from passers-by, intruders – and goats. 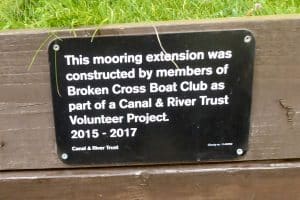 It even, by a great stretch of imagination has a beach. 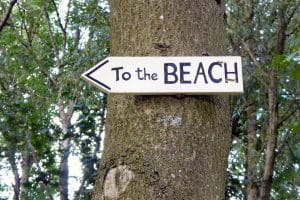 Sunday morning was cool and blue. 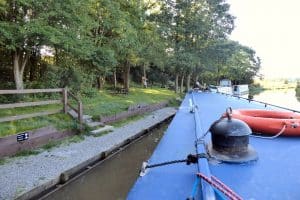 Just 7¾ miles remained to Anderton. There are reedy narrows, 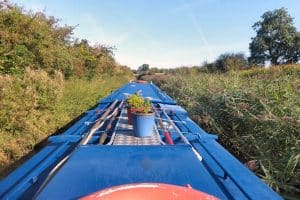 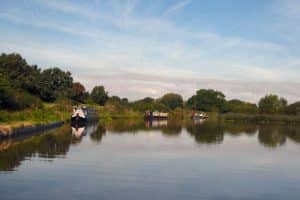 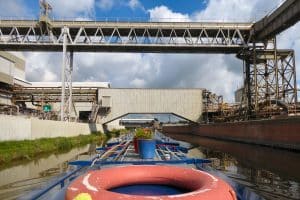 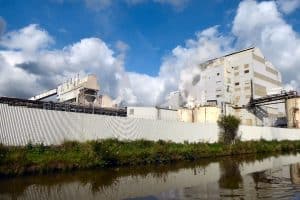 The Lion Salt Works (subject of a huge restoration project  ) is a thriving visitor attraction now. 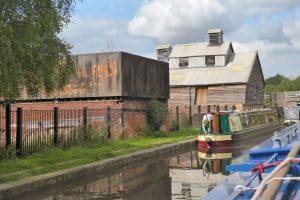 Onward, through the Northwich Woodlands, 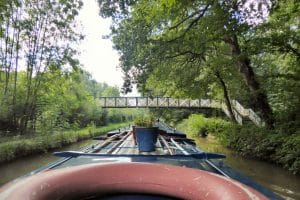 much of it planted in a post-industrial landscape. See reference to halite (salt rock) here:

From the canal the Anderton Boat Lift is hardly visible until you are right outside the holding basin. The Lift, an engineering masterpiece of the 1870s, was built to transfer boats between the Trent and Mersey Canal and the Weaver Navigation. 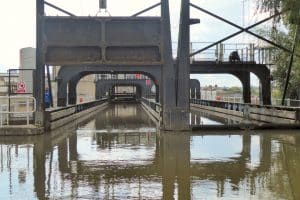 Cleddau was granted an early afternoon passage. Now, six days (and a fair amount of unhelpful weather) after leaving Higher Poynton, the boat was just a ride in a bath-type caisson and a fifty foot drop away from the River Weaver…

Next time: Down onto the river