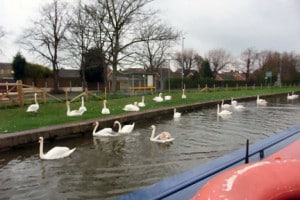 Gaiters and waterproofs were declared the garb of the day this morning. The weather was never too difficult to contend with, but from time to time there was a need to replace the gloves or find a fleece hat or wipe a wind-caused tear from the eye… while underfoot conditions were occasionally slippery. No matter: first there were the Wheelock two locks followed by Wheelock village. Here many of the gardens cause a smile. There is a very grand double storey multi-function garden hut – and further on is a duckhouse(!) which exactly echoes the  style of the summerhouse (presumably for humans) in the same garden. Home owners all the way along this canal seem to enjoy having a watery strip at the end of their properties, many installing pretty plants and quirky features for their own and others’ enjoyment.

It’s not unusual to see a solitary heron beside the canal – these days most herons disdainfully ignore a passing boat and just concentrate on eyeing up their next feed. Hedge blossom is still apparent but what is most distinctive about this stretch of the Trent and Mersey is its width and its depth. Subsidence caused by salt mining has meant the canal banks have had to be heightened in places and the water is deeper than usual. As the canal approaches Middlewich the land becomes flatter and signs of industry appear.  In a dull landscape white becomes the local colour – a large flock of juvenile swans, the dirty white brick canal bridges and the salt. There are sites where works have been demolished, just piles of rubble remaining. Then there is the extraordinary bright white piles of salt at the (now) British Salt Works. Information boards around the town refer to previous brand names: Cerebos and Saxa Salt (remember those?) and to the town’s recognition by the Romans as a salt source.

After 7.25 miles and 10 locks Cleddau was moored. The canal weaves its way past King’s Lock (and its busy chandlery), the entrance to the Middlewich Arm (which leads eventually to Llangollen), two hire fleets, a flight of three locks on a bend and a dry dock. If you like to look at boats, boat manoeuvres and canal side structures there is much to see here, all within about a half mile. The town, however, seems to lack eye appeal.  Mid-afternoon a traffic warden was conscientiously booking vehicles which infringed regulations. There are hairdressers, florists, many pubs, a fair number of takeaway food outlets, a couple of butchers and a few charity shops. You can buy cards and balloons, you can go to the library – but not much else. There are lots of older red brick terraced houses and new housing developments too, but where do people work round here…? Perhaps the canine, permanent resident on a bow near here, can provide an answer!

There’ll be a day to spend hereabouts tomorrow before pushing on to Anderton (passage down to the river booked for Wednesday afternoon). The weather will be dictating our next boat movements…