Paddington Arm and the Regent’s Canal

Timing was crucial on Wednesday: arrive at the London Canal Museum between 3.45 pm and 4 o’clock was the instruction. This was to avoid the only-in-August Wednesday boat trips and to book in at the Museum before closure at 4.30pm.

At 10 am it was farewell to Gasometer View.

Restocked from the Kensal Green Sainsbury’s the cruise could begin in earnest. Destinations: Little Venice, Paddington and then the Museum.

seen before, for sale she was then, near Kingswood Junction a few years ago.

How folk love to exercise their green fingers, whether on a small balcony

or on top of a boat.

The canal becomes an urban ribbon, boats of all kinds and sizes moored on both sides, often double berthed. Above streams the Westway,

There in the centre is Browning’s Island (so named after the Victorian poet Robert Browning). Around it are gracious Regency houses. Bearing right the canal leads onto the end of the Paddington Arm. It’s a popular mooring spot, with easy access to Paddington rail and tube stations

The wind round tall buildings can accelerate – and so it did on Wednesday afternoon. There are still a few low standing historic buildings remaining but amidst the jungle of Paddington high rise towers

turning the boat round came as the first in a series of challenges.

Rain may stop play in a cricket match but it cannot stop a cruise if there is nowhere to tie up. Return down the Paddington Arm, into Little Venice Pool again, past the Island,

a right turn onto the Regent’s Canal and through the Maida Vale Tunnel. Now the canal glides past elegant white houses,

past pristine gardens, past strict No Mooring signs. Then comes London Zoo, its waterbus landing stage on one side, the Lord Snowdon designed aviary on the other.

The rain was driving now, the Captain juggling umbrella and tiller. “Look how I caught it!” he exclaimed at one point, proud that he had recaptured it while it took off,  airborne in Camden.  There’s a sharp left turn at Cumberland Basin (in a squall, with a current of water pulling the boat to the right) and there not far ahead, just past the cow on a balcony,

Perhaps with so much rain there’d be no gongoozlers was a secret thought… but no, there were plenty of spectators, there was a boat rising in the right hand lock and a novice crew trying to descend in the left hand lock. “We don’t think we’re doing it right,” one crew member confessed. Thereafter came Boatwif’s challenge – control the boat down through the top lock, dance about for a long time below while waiting for the second (single lock only) to become available, then do a long reverse to move out of the departing trip boat’s way. And the rain continued.

There were fewer spectators at the third (bottom) lock, just a gang of cider-swilling youths…

Just one more lock at St Pancras where here the gasometer

is the centre piece of modern residential accommodation. Not much further on came Battlebridge Basin, site of the London Canal Museum.

It was all worthwhile. Straight from her lab, bearing her homemade speciality Portuguese custard tarts, 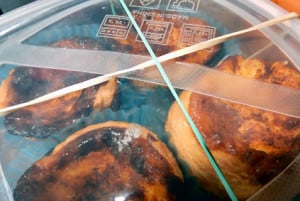 It was a fine and fun-filled night.

Just 8 locks, 5 miles and another tunnel separate the Canal Museum at King’s Cross from Limehouse and the tidal Thames. However, it was on leaving the overnight mooring on Thursday morning that there was another Monkton Moment* (the 19th this trip). A voice from the stern of a residential boat addressed the Captain. “Come from Pembrokeshire then do you? I’m from Milford.”

Islington Tunnel is 960 yards long. To proceed through a tunnel boaters are required to switch on a bright tunnel light, both to see by and to be seen. Well into the tunnel, though far ahead, a tiny spark flickered, low down. What was it? What was in the water? Eyes strained to work out the shape and cause of the obstacle. “Are you a tug?” Boatwif called out. No reply, just a dark mass slowly getting bigger. The Captain crept onwards and then it became apparent: it was a boat, under way, crawling through the blackness. On the stern deck a young woman clutched a tiller with one hand and the faint torchlight from a mobile phone in the other. What madness makes that glimmer of light seem safe and sufficient for travelling through a long tunnel…

Out of the tunnel

the view was of apartments, trees and boats.

The canal continues its route eastwards, 8 locks in total to the Thames. Hackney is on the left bank, Bethnall Green on the right. At Old Ford Lock there was talk of Tower Hamlets and then Mile End. There are tower blocks, railway bridges

and fast speeding bicycles along the towpath. These are places previously unvisited, known of only through media reports…

Just after Old Ford Lock came a moment of recognition, “telly recognition” that is. Remember the moment when Timothy West bounced onto the Hertford Canal

and cheerily pronounced narrow-boating a contact spot…? Later in the day there was another such moment. From the back of Limehouse Basin is a channel, the Limehouse Cut.

A sign gives timings to walk or to cycle to Queen Elizabeth Olympic Park. 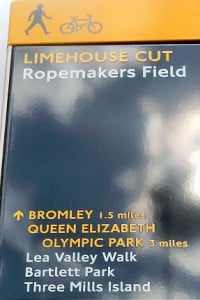 Was this the route then taken by David Beckham with the Olympic Torch on the night of the Olympic Opening Ceremony?

In its past this was Regent’s Canal Dock where coal, timber, fruit and ice were unloaded at the wharves that lined the waterside. There’s a sign directing pedestrians to the nearby Ragged School Museum. Scan the skyline and you recognise the recent Canary Wharf building

– but information is sought on this roof figure…

Just beyond the tidal lock that connects Limehouse to the Thames is Narrow Street. There is little vehicular traffic but a steady stream of cyclists – and a blade skater sighted gliding down the centre of the road. The Grapes pub 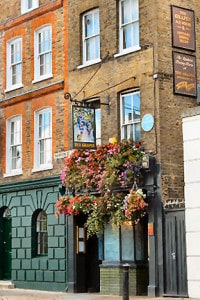 is in this street, reputedly owned now by Ian McKellan and used in his fiction by Charles Dickens. In this street too is a very large Herring Gull,

fortunately unlikely to steal your sandwich…

You can promenade close to the river, watching the traffic, looking east towards Greenwich,

west towards the Shard

and Westminster. As darkness came still boats plied the river

– and the Cleddau crew wished for calm waters in the morning…