Pause for thought at Runnymede

“There’s been a lot going on at Runnymede over the summer,” said Senior Niece. She’s a relative local, so she knows. Still, there was a lot going on here 800 years ago, as a mural at Bell Weir Lock explains.

(later the name became Daubeney) was one of the key players…

!n 1215 Magna Carta was agreed and sealed here on this ancient meadow. King John’s dispute with his barons was resolved when Magna Carta established for the first time the principle that everybody, including the king, was subject to the law. Though the original 63 clauses dealt with specific grievances between the King and his barons many of the fundamental values embedded within Magna Carta have since become crucial elements in constitutional law in many countries. Here at Runnymede is the Magna Carta Memorial, erected in 1957 by the American Bar Association.

Runnymede is a National Trust property and the Ranger collecting the mooring fee on Wednesday night had mentioned The Chairs. “They’re over in the field, stories to them all, get a leaflet…” Intrigued, a visit had to be made. And there, in the middle of the meadow are 12 precisely positioned bronze chairs.

The installation, created as a permanent artwork, is titled The Jurors. Sit on the chairs: discuss a case, a right, a policy…

On the back and on the front of each chair is worked an image of past or ongoing issues relating to the fight for freedom, the rule of law and for equal rights. Some of the images and issues evoked are immediately recognizable: homosexuality,

whereas others refer to less familiar topics such as Aboriginal history,

and the Golden Rule.

Not far away, just up 50 steps made of Portuguese granite setts, is another remarkable installation, the much visited memorial to John F. Kennedy.

The 50 steps represent the 50 US states. Further along from the Kennedy stone a pair of benches allows for reflection and connection between Monarch and Consort,

Head of State and Escort…

But Runnymede is the site of yet another memorial.

where the names of over 20,000 airmen lost in action are recorded.

How poignant it is to view list after list of names, arranged year by year, Air Force by Air Force, squadron by squadron, all of whom have no known graves. It is stark, heartrending, the more so than on a previous visit (1996), as now photographs, cards, letters and messages personalise the memorial.

But if you’d expected this to be a place just for older generations or for fans of military history it was not so:

“We’re looking for our relative,” called a father to his young family. Connecting with personal history must be made important to the young. High above Runnymede, where the rights of freedom and fairness are so highly rated these men are rightly remembered, for what they did in World War 2 in defence of Britain and the British Commonwealth.

Then there was just one last Runnymede sight. On 14th June John Bercow, Speaker of the House of Commons, unveiled this bronze statue of the Queen,

And at the end of a rest day at Runnymede the Visitors came, 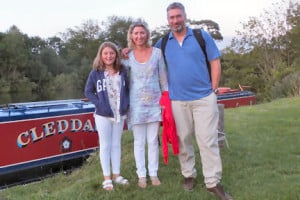 the legs belonging (left to right) to Pony Lover, Senior Niece and Hamble Sailor. Tales of Caribbean scuba diving and an off-shore volcano they told … squalls on the Thames are tame by comparison.

Now cruising on the River Wey.