Cleddau and Tentatrice had spent the night of 23rd June moored in Portishead Marina, two narrow boats among a fleet of serious seagoing vessels.

After a day on tidal waters the challenge of returning to the inland waterways lay ahead. Timing was crucial – the right state of the tide to lock back out onto the Severn Estuary as well as enough water to get up the River Avon to reach Bristol.

“I’m closing the lock at 9 o’clock,” advised the Portishead lock keeper. “Be there for quarter to…”

At 0840 the Captain put out a VHF radio call to the Marina: “Two narrow boats about to untie to access Portishead Lock.”

What a roar of little engines there was: small boats sped across the marina,

determined, it would seem, to be in the lock ahead of the slow narrow boats. Then a bigger vessel pulled away from its moorings to join the procession to the lock. 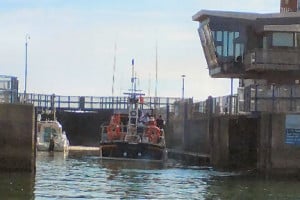 This was a lifeboat, setting off for relief duties and trials at St Ives in Cornwall, refuelling first at Ilfracombe. More boats squeezed into the lock – Tentatrice, Cleddau,

the lifeboat plus five other boats, eight in total!

Spectators gathered at the railings above the lock: conversations between boaters and gongoozlers continued until the drop made words inaudible.

At 0920 the huge lock gates opened. Beyond lay the sea, thankfully quieter than on the previous day. Out surged the fishing boats and the lifeboat, all bearing left at the end of the long lock entry wall.

“No traffic,” was the brief reply.

heading for the wind turbines,

all the way past the wall of Royal Portbury Dock.

Behind receded the colourful apartment blocks of Portishead.

To starboard were giant dockside cranes.

Ahead now was the entry to Avonmouth Dock. “Do NOT go in, hug the outside wall, hug the wall.” Along on the pier was the angular glazed blockhouse that houses the Bristol VTS.

Momentarily there was no sight of the navigation channel; there were mud banks to the right,

a bit of water ahead, but which was the way…?  A brown trace of water slewed and bent ahead – and further away a bridge soared overhead. Under the M5 the river goes, the tide rising now against the muddy river banks.

0936: 6.2 mph. The Captain studied his charts and tables. Mindful of tidal lockings at Bristol due at 1020 he announced: “Cleddau to Tentatrice:  We need to speed up.”

Next was the village of Pill. Wave at the last cottage,

It’s 4¾ miles between the mouth of the river and Bristol Dock entrance lock. After Pill the river weaves and twists between banks of greenery and trees.  Why did this riverside building remind one of Landshipping or was it Lawrenny on the Upper Cleddau…?

some distance now from the sea, seemed an incongruous sight. Short white markers in the trees

plotted the navigation channel. For a while the river crept silently towards the city.

Quickly the Captain responded: “Goodbye Bristol VTS… Calling Bristol Harbour on Channel 14. Bristol this is nb Cleddau, Cleddau, in company with Tentatrice for your Entry to Bristol Dock scheduled at 1020.”

The tide was pushing hard from behind. Eyes were on the GPS for monitoring speed yet still the boats were in race mode. The throttle was pulled back to tickover…

From behind the trees noise intruded on the silence. A train, heard but not seen. Motor traffic then, along a road on the left bank. There was Black Rock

– and first glimpse of the spectacular Clifton Suspension Bridge.

Another call to Bristol Harbour.

There were signs of quarrying – and then the bridge’s profile grew. High above the gorge it soars.

Started in 1831 under the guidance of youthful Project Engineer Isambard Kingdom Brunel it wasn’t completed until 1864, five years after his death. The right hand tower, the North Somerset side, was as remembered. On the left hand side the Clifton Tower is undergoing restoration now, encased in protective plastic and scaffolding. Twenty one years ago, on a hot summer’s day, Cal Son (not Cal then!) had posed for a photo here in heavy academic gown on Graduation Day…

The edge of Bristol: old wharves,

terraces of houses, lining the hill.

1045: there ahead now were the lock gates, closed.

After an age the gates opened – and out came the Pride of Bristol and a low trip boat.

Into the vast cavern.  From far up above a voice shouted instructions: “Pass yer rope thru ‘ere, yer long rope, yer red one.” There was scrabbling about, a rope dangled down, the red rope hauled up – and then attachment round a bollard above before passing the end back down. Tentatrice came in alongside, tied to Cleddau and slowly the boats rose up to the level of Bristol Floating Harbour.

Friendly advice came from the lock keepers: low bridge ahead so dismantle the nav light frame;

find mooring spaces, then report to the Harbourmaster; if on the left catch a ferry back across the harbour to pay mooring fees…

Released from the lock, what a surprise!  Bristol Floating Harbour is a riot of colour, movement and shapes. Masts, rigging, a crow’s nest, a high wooden ship moved out sedately in front of the narrow boats.

(This, it was later discovered, was Matthew, a replica of a caravel sailed by John Cabot in 1497 from Bristol to North America). See other images here.

opposite which was the most perfect mooring.

With constant activity on the water to look at, easy access to a water tap, electricity on a meter and a Tesco Express no more than a two minute walk away this could be a very fine place.

And so it was…

Next time: Shipshape and Bristol Fashion