There was nothing quick about the start on Wednesday morning… Cleddau and Tentatrice had spent the previous evening and night about two hundred yards above New Marton top lock. From untying the mooring ropes it took nearly an hour to enter the top lock. The reason? Cleddau was number four in a boat queue, Tentatrice number five …

and as the minutes ticked by so the queue grew!

Once through the two locks a meander of a few miles took the boats to the day’s first destination.

The Montgomery Canal drops down off the Llangollen Canal at Frankton Junction. Just 7 miles of it is navigable and boaters wanting to cruise it must apply to Canal and River Trust for access through the four locks at the junction.

By pre-arrangement the four locks can be operated between noon and 2pm. What luck then to arrive at about midday and to be able to watch some boating activity on this little used canal.

The locks were reopened nearly thirty years ago and the top two are a staircase, one lock leading directly into another.

Below the staircase the channel seems a canal in miniature.

The upcoming boaters (their passage booked as well to return up to the Llangollen Canal) crept along the pound,

anxiously trying to manoeuvre past each other.

It’s a charming world down there; there was a simple honesty box and a cucumber for sale at 50p. 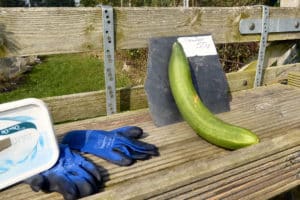 The waterside cottage is pretty, neat, proportioned, unbothered by noise or footfall.

The mile or so walked provided just a glimpse, a tempting glimpse, along a lonely but lovely waterway.

Cruising through the countryside does of course increase the likelihood of wildlife sighting. After the episode of the swimming cow on Wednesday there was an escapee sheep on the towpath on Thursday

and on Friday two Shetland ponies on the offside below the Grindley Staircase locks.

A mooch around Ellesmere while waiting for a key to be cut (a boring and unresolved tale…) provided some snatched glimpses of other lives and other places.  A signpost up to the Castle Mound suggested a prospective viewpoint. Part way up St John’s Hill a door open into what looked like a private house revealed visual riches inside. The owner, an artist who works in a glass studio behind the ground floor gallery, trawls the region for local crafts.

Doorways can be interesting. How old a property is this?

Just over the brow of the hill is Love Lane.

You can tramp over the Castle Mound (a motte and bailey castle with dry ditch still apparent)  There is just one structure up there, a stone wrapped in chains.

Is this the remnant of the ice house referred to on one of the information boards?

Down below, on the eastern side of the town, is ‘Shropshire’s inland sea’, the Mere.

The trip boat rested at anchor some yards off shore, 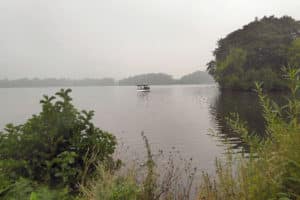 handsome birdlife pootled about on the promenade

and a stroll through the Cremorne Gardens rewards pedestrians with views over the Mere,

an excellent playground – and this… a holey narrow boat!

The return cruise down the canal continued, from the lakes of Ellesmere,

past the mosses, back to Grindley Brook. It was a trip on Friday marked by blustery north easterly winds, congestion at the Bettisfield water point,

at bridge holes and at Whitchurch marina.

offer relief from the wind and intensity of boat traffic?

The boats are moored up now, between Povey’s and Willey Moor locks, ready to sample the fare later at the Willey Moor Lock Tavern. It is said to be charming inside (have camera in hand then…?)

On Sunday the trip will continue, 3 lift bridges, 8 locks and 8¾ miles to cover to Swanley for what will be the last night on the Llangollen Canal (or should that be Lanny Golly , LAN-goll-UN, Lan-goal-en..!)