Rather a lot of weather 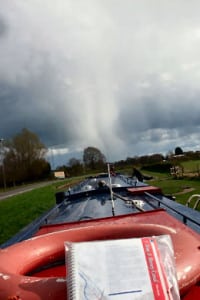 Pretty well everywhere in mainland UK today was likely to experience showery conditions, according to the morning’s weather forecast. There have been occasional glimmers of sunshine, a great deal of scudding cloud, several very sharp showers, lots of cold air, three hailstorms and possibly the beginning of a twister! So a day never to be far from a rain hat and also one for waterproof over-trousers and gaiters…

The earlier part of the morning saw Cleddau boating past works various and modern housing (or perhaps conservatory) estates, past Wincham Wharf and Orchard Marina to the two large flash areas. Just where Cleddau had spent her noisy wave-slapping night last Tuesday  was moored another boat. The swan is still curled up on her nest and the water is as serene as it was on our arrival last week… On went the cruise, past the narrowed area where rushes have encroached far into the channel, then the squeeze over Croxton Aqueduct and then into Middlewich – or rather to join the queue of boats at Middlewich Big Lock.  After a food restock done in a relatively small Tesco Cleddau was on the move again – a slow crawl up the three middle Middlewich Locks, a pause at King’s Lock Chandlery for another gas cylinder and then on, through showers, up 4 more locks towards Wheelock.

The Captain had a vision of a suitable overnight mooring place. It was about a mile past the Rookery road and railway bridges, on a gentle curve, with Paddy’s Wood on the opposite bank. Round the bend we came and there ahead, just about on our intended mooring was another boat. And as we passed there were frantic wavings from an offside window. “Why, it’s Bosley!” observed the Captain. Hardly had we tied up than there was a polite tap on the side – and very soon the Bosley and the Cleddau crews were drinking tea and sharing tales together.  Just a year ago at Bugsworth acquaintance had been made, Cleddau fresh from her Bourne Boats fit out and Bosley then being built at Braidbar Boats. Bosley, finished last July, is 62 feet of liveaboard accommodation. And when the invitation came to move aboard Bosley for a second mug of tea – well, the response had to be yes! It’s a glorious, very comfortable boat, much being  in traditional style but the soft furnishings and stove tiles having an Art Deco thirties feel. (One wonders now where next these two crews will share water…?)

The evening routine on the boat often includes basic admin. Cleddau’s fridge (Devizes: August 2002) is showing signs of wear. A hinge on the freezer compartment has come adrift. The Captain tonight has searched the web – and via ebay has tracked down a replacement at Abergavenny Caravans. Hands up those readers who know where that supplier is…!