Valley Wharf to Wilmcote: 2.9 miles, 12 locks
Phase 3 of the Summer Cruise has begun: this time “summer” is an appropriate word to use!
There was never any intention to move the boat on Saturday – still hemmed in by a hire boat

the crew sought boats elsewhere. How would a Stratford River Festival compare with the biennial Bedford River Festival?  A half mile or so towpath trundle down past four locks brings walkers and cyclists to Bancroft Basin. As last weekend crowds thronged around the Basin, lazing on the grass,

watching a street entertainer drum up his crowd and queuing for river boat trips. Meanwhile a huge mass of people was shuffling slowly, very slowly, across the pedestrian Tramway Bridge towards the Riverside Park. The traffic was two-way, but barely moving… an ice-cream van parked at the park end of the bridge was doing brisk business – and causing huge congestion. Midway across the river was moored an odd-looking structure, a C&RT dredging barge, dressed overall with awnings and bunting.

Whether its purpose was to maintain a floating Keep Right boat traffic island or to shelter boat controllers was never clear…
As with many a festival there were masses of stalls: charity organisations, fashion outlets, hot food stalls, drinks parlours, a climbing and abseil face for youngsters, mini-golf, a series of bands playing on the bandstand. But for the Captain and Boatwif the appeal is in boats on water… rowing boats hired for pleasure were much in evidence but along the bankside were moored scores of other craft.
First came a line of three narrow boats available from local hire boat bases (Kate Boats of Warwick, Anglo-Welshfrom Wootton Wawen and Valley Cruisersfrom Stratford),  “Come aboard and take a look,” what a great marketing idea.
Next came a dozen or so long narrow boats, rafted together and moored herringbone style, bows pointing at the Swan Theatre.

Flags and bunting fluttered aloft, brass gleamed, owners posed…
Next, rafted together but moored lengthwise to the bank, 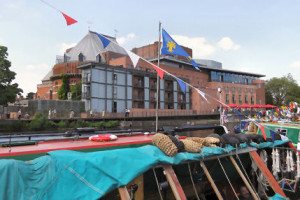 were workboats and trade boats.
Then came another raft of shorter narrow boats, again all spruce and shiny. Names intrigue..

On went the lines of boats, with a break for the chain ferry, and then more boats still… There were a few cruisers, including one bedecked with lights for the evening illuminated parade.
In hot sunshine tattoos and torsos were on display too. Hundreds of people flopped in the sun in front of the bandstand, prepared, apparently, to sizzle throughout the afternoon.

It appeared the navigation must be kept open so there were no fancy dress rafts or dragon boat races or sailing demonstrations as at Bedford. At 1010 last night cracks and bangs were heard, the grand firework display. From Cleddau’s front deck only the highest reaching fireworks could be seen but the roars of approval were heard clearly enough!
The climb out of Stratford continued today (Sunday): one lock and then a long stop for a serious boat-wash.

The hose pipe spray was borrowed to cool down an American White Shepherd rescue dog.

Then to the Wilmcote flight: just the first three locks…? maybe the next five…?

and the last three? Twelve locks total on a very hot day – madness!
“Is it your own boat?” How often has that been asked. Yes and it’s 24 years old. Not so nb Tentatrice, now six days into the hands of her proud owners, our Relief Captain and First Mate. Read their blog account for Monday 1st July, the day when the long-held dream of becoming boat owners became reality. They are afloat now, somewhere near Worcester. When last on Cleddau Relief Captain nearly filled his little black notebook with suggestions of useful kit to have aboard: shame the Tesco-bought fan,

not used for the last two summers, wasn’t mentioned…

Tomorrow, onwards and northwards up the Stratford Canal.