Rudyard for fun and frolics

After weeks of river cruising the Cleddau crew were back in canal-land last weekend. 17 months ago there had been one of those Keep this date free emails:  keep the July 12th/13th 2014 weekend free for an Event to mark my 40th birthday,

was the message issued by Techno Son-in-Law.   The Event, two years in the planning, had no requirement for dinner jackets or ball gowns but a dress code of scruff gear and kit for getting wet…

Day 1 was to take place at Rudyard Lake,

near Leek, in North Staffordshire.  Canal fans may recognise this as the reservoir created two hundred years ago to feed the Trent and Mersey and the Caldon Canals.

Those with a penchant for poetry (If – ) and short stories (Jungle Book and the Just So Stories) may be reminded of Rudyard Kipling whose parents had courted at Rudyard before moving to India. More recently, in 2006, global fame came to Rudyard Lake when it was the venue for Clarkson, Hammond and May of Top Gear to race their specially adapted (supposedly) amphibious vehicles…  Now does that episode ring a bell…?
Report to the Rudyard Lake Activity Centre by 10 o’clock was the instruction from Techno Son-in-Law. Folk were prompt, ready to be organised.

Perhaps it should be explained that nothing gives Techno Son-in-Law more pleasure than a project to be developed and managed. It proved an organisational triumph on Saturday that forty plus individuals from babes to pensioners were kept entertained, fed and watered all day long. Do as much or as little as you like: sit out on the balcony in sun or shade;

have a kayaking lesson – and play kayak polo;

climb and abseil on the climbing tower; 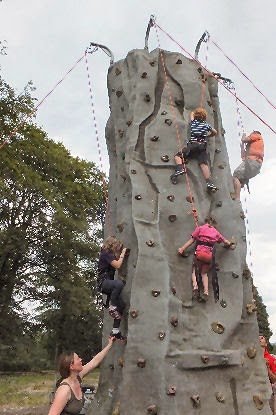 paddle a Canadian canoe and view the Victorian era boathouses from the water; take part in group problem solving; 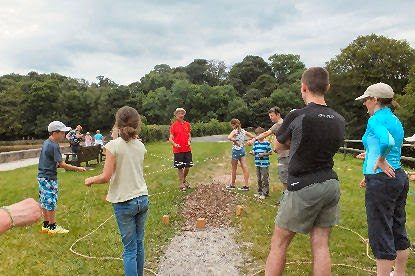 with Alex of Wacky Woods  to make decorations and pictures;

race in the bell boats at the end of the afternoon.

If none of that appealed there is a lake circuit walk and also a miniature steam train to view and ride on… Moorland Adventure  provided boats and gear along with instructors with lashings of patience and humour – and via another organisational masterstroke* the sun shone all day. Did the birthday boy get a dunking? Of course he did,

the result of a slickly executed conspiracy!
The core group of Graftonites, undergraduates together nearly two decades ago at Reading University, maintain regular contact. Four families slept under canvas. Pack up your tents on Sunday morning was their instruction and report up the road to Langley Village Hall. There the Saturday attendees reconvened and set off for a country walk,

led of course, by the 40 year old in his Ranger role. There were pauses along the way for a horse, then a pony,

next a stile, then a frog,

and finally a toad. 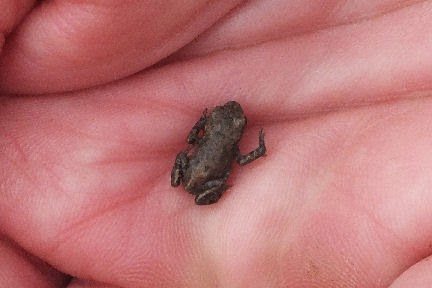 To the youngsters’ delight the Cheshire One, demonstrating her local knowledge, pointed out Bottoms Reservoir,

while Techno’s Dad got a mention as the man who constructed the Library in the Landscape, high up there on Tegg’s Nose.

The zoology graduates were photographed

and hungry now the group straggled back to the village hall to a BBQ lunch, more puddings and cake – and a washing line or two of embarrassing photos…

There were journeys to be done for many after lunch, with commitments on Monday to work and school. It had been a great way to spend a weekend, so much talking, some walking, some floating and lots of laughter. Many thanks, Techno!
Later the Captain and Boatwif retreated back to the Rudyard Hotel

– and contemplated how the fringing and tassels, the flock wallpaper and highly patterned carpets may have been the epitome of good taste for the visiting Victorians; while the food was excellent the quaint serving practices and haphazard admin perhaps might score it a fair few points on a Fawlty Towers scale…
Countdown time now: the Bedford River Festival is this coming weekend and Cleddau has a mooring booked.

*Reading’s Meteorology Department was well represented by past students and post-grads. Did they use special powers to secure the sunshine?!