Periodically the Captain and Boatwif get Sea Fever * when they

“must go down to the seas again, to the lonely sea and the sky…”

For them a trip out west is essential, to gaze again upon the Pembrokeshire coastline,

to see the sea sparkle and surge, to inhale the salt air, to sniff the heather and coastal thrift, to pound along the sands,

medieval streets and the very modern Cleddau road bridge that connects South Pembs to “the other side”….

Last autumn a “We must go down to Wales again” yearning became translated into a major plan, a two week holiday amongst family and friends during which the approach of a pair of significant birthdays could be celebrated.

So, on a calm Friday evening, there was a first glimpse of that familiar view of Trewent Point

“Thank you for putting the flags out for us,” Cal Guy Snr joked two days later.

For him it was a second visit to Wales, for his siblings their first. For the next few days friendly Welsh dragons, part of Cleddau’s stock of festival flags, fluttered along the outside of The Hen House.

What would west coast Californians make of west coast Wales? There is sand aplenty, brilliant for creating sand towers

and dams (“I’m a sand scientist,” the Cheshire One announced, her team members opting for construction work and dam project management).

There’s masses of space to fly a kite

(in this case it was a partly submerged ship’s anchor).

Then there’s the sea: paddle in it,

run into it, swim in it, snorkel in it, surf in it. Choose your beach according to wind direction: do you want shelter from the wind or an onshore breeze to whip up some surf?

These days Freshwater West has daytime lifeguards supervising about a hundred metre stretch of sand.

But on the second Thursday the waves were crashing and churning at Broad Haven South: “Best day’s surfing I’ve ever had,” Techno Son-in-Law proclaimed. 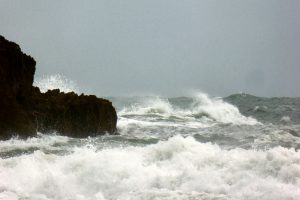 When not in the sea there was chance to be on the sea. A jet boat trip from St Justinian’s at St David’s was an all-thrill experience.

Layered up with warm and waterproof clothing

the group descended to the sea. Life jackets on,

camera consigned to a waterproof locker, the trip could begin. Both hands were to grip the handles and off the boat surged on a fast and bumpy race across Ramsey Sound to the island a mile offshore. The Californians, veterans of many man-made theme park rides, squealed and shrieked and shouted out as waves overwhelmed the bow and drenched the passengers time after time after time… Oyster catchers and a kittiwake soared overhead, fulmers nested in precarious rocky crevices, a cormorant stretched out its wings to dry in the wind – while curious Atlantic grey seals popped their heads up out of the waves to inspect the boat or lazed on the rocks on the island’s beaches. Out in Ramsey Sound on an incoming tide sleek black creatures slithered and danced, unusually slapping their tails on the water in a curious porpoise prance. Moments of wildlife watching were interspersed with cave investigations and fast and bouncy transits between points along Ramsey Island’s coast.

“This is the best day of my life,” a grinning Cal Gal gasped… (See trip details and promotional video here )

On return to the mainland a close up inspection of the Tamar class St David’s lifeboat  was a reminder that the sea presents both thrills – and dangers. 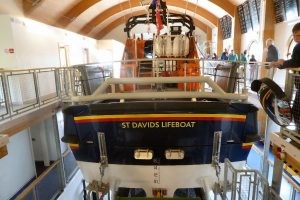 As for Boatwif’s water-loving reputation – did she swim in the sea: yes!

Did she surf: yes!

Did she join the squeals on the jet boat: yes!

Then there were stairs – when changing height levels Californians expect elevators but it was down a flight of steps to board the St David’s jet-boat,

and down and up loads more to explore Pembroke Castle. Underneath the castle is the Wogan’s Cavern,

a great natural limestone cave, a place of habitation thousands of years ago and used by the Normans as a storehouse and boathouse. Shout out down there and listen as the echo resonates around the cavern and roosting birds, invisible to the eye, flutter high above your heads in the darkness. There is a spiral staircase down to it (and back up too of course). Views from the top of the five storey high keep

are wide-ranging, looking down over the splendid map of Wales,

out over the walled town, down the river towards the Haven and across the hills and valleys of rural South Pembrokeshire.

There’s a training programme at the Castle these days for would-be knights. After being kitted out, and making a processional march across the map of Wales,

three squires took a lesson in courtly manners, participated in an attack on the gatehouse,

and then at the steps of Henry VII Tower were dubbed knights by Sir Penfro himself…!

Since June of this year Pembroke’s most famous son has been commemorated by a fine bronze statue, positioned on the Mill Bridge against a backdrop of towers and battlements.

It is good to see that this site (where in 1956 the old tidal mill burned down) is already attracting a good flow of visitors.

and how Boatwif had craved a fresh crab salad) a first night gathering of far-flung families,

cakes, fruit and veg at the 200th annual Pembroke Show,

So, Pembrokeshire in the summer of 2017 – sensory overload there may have been but it has left sweet, sweet memories…