Boatwif and the Captain were spared a regular school day on Monday (12th November) as it was Veterans’ Day in the US, a public holiday. There would be four schooldays of the forthcoming week before the Thanksgiving Break and a confusing amount of time-keeping to contend with.

Cal Guy Jnr (age 8, Third Grade in elementary school) needs to be at school for 0845. He can be delivered from 0810 and he enjoys the pre-school playground time. Traffic can be intense at school times and the rules for dropping off students are precise. Cars entering the premises must follow around in the lane in front of the building and keep moving forward…

Cal Gal (age 12, Seventh Grade in middle school) takes music as an elective. She is in Jazz Band and Concert Band. Jazz Band practices start at 0654 each morning. Note the time, there is no rolling through to a 5 number or to the hour.

Marching Band season lasts between August (the start of the school year) and Thanksgiving.  For the Seniors (Twelfth Grade, ages 17-19) this was to be their last week of marching band performance. After the sections rehearsal each Senior was paraded through an arch, accompanied by family members.

A public address commentator provided each participant’s name, the role played in the band and post high school plans. (This was fascinating stuff, study ambitions ranging from psychology to physics, mechanical engineering to bakery, education to animation…) The Seniors were then posed on and in front of the glider (a prop in the band’s display) before the show was performed in full.

This year’s performance is inspired by flight in nature, Leonardo da Vinci and powered flight.

Music, marching, dance, flag and rifle waving, no photograph captures more than a tiny portion of the whole….

The closely directed show entails a remarkable costume change (representing clouds and sky) and a formation that resembles the wings and tail of an aircraft.

*See here for the very final performance videoed at a regional competition on Saturday evening at a high school about 65 miles away in Riverside County.

Cal Guy Snr, a barisax (baritone saxophone) player, opted for marching band last academic year: if you’re interested here is a performance of their 2017 show. Its theme was water.

Now Cal Guy Snr’s passion is theatre sound and lighting. The school theater was purpose built 10 years ago on the campus of an entirely new high school. As part of the school tech team he confesses that he “practically lives in the theater… “  Nothing seems to delight him more than a shin up a ladder to adjust lights on the catwalks or to sort out the myriad of microphones required for an event or performance. Twice this week he has been paid for tech support at two very different events.

Needing to prepare for the Saturday Night Dance Show Cal Guy Snr persuaded the aged grandparents to transport him to school on Saturday afternoon and then to have a guided tour of the theater… There was an initial distraction on arrival on campus as props, instruments, musicians, dancers and chaperones were  being loaded into three sizeable trucks and four school buses for the two hour trip north up to the band competition venue. The trucks left first, needing to stop at the weigh station en route to conform with transportation and border control regulations. 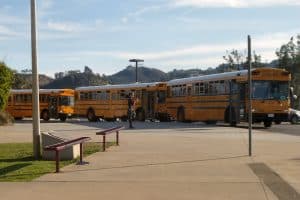 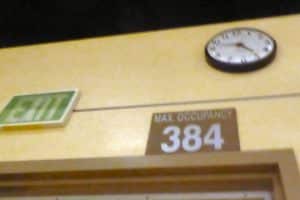 has a very comfortable broad auditorium and deep stage.

From the stage the acoustics seemed splendid. 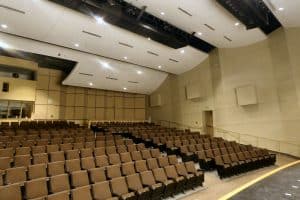 On stage left is the ladder to the catwalks. 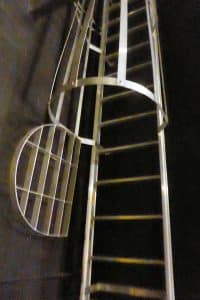 The drop down projector screen was demonstrated and a peek made backstage (Drama classroom and workshop).

Then came a tour of the sound and lighting control box, curtailed only when another technician and the dance show director needed to prepare the lighting plot.

So, those were the events in a school week before Thanksgiving Break…

Since arriving at 33N, 117W about ten days ago, there’s been a fair amount of out and about, to the north, the south and the east. Laptop permitting (in US-speak “there have been some issues”) hopefully there’ll be a post-Thanksgiving update.