Sea, sheep and space – after a few days on and around the Black Isle those are the abiding impressions.

Just where is the Black Isle? It’s in the north east of Scotland, a twenty mile long peninsula, surrounded by sea on three sides –the Cromarty Firth to the north, the Beauly Firth to the south, and the Moray Firth to the east.

The sea is ever present: pop off the Black Isle, say to Dingwall (nearest supermarket) and you join the A9 to cross the graceful Cromarty Bridge over Cromarty Firth.

and the road crosses the Beauly Firth on Kessock Bridge. Head up north (91 miles to Wick, 110 miles to John O’ Groats) and the A9 frequently parallels the North Sea.

The last visit here was in April 2015.. Then the trip was made by train; this time it was courtesy of Easyjet, from London Luton to Inverness.

Every visit to the Black Isle includes a road trip to its narrow tip. Here, sheltered by the two Sutor Headlands lies charming Cromarty village. Its history lies in herring fishing and a hemp factory. Now tourists are intrigued by the huddles of fisher cottages,

the Courthouse Museum where a trial is re-enacted,

the sight of a lighthouse close to the shore,

and a small harbour

that faces the oil rig yards at Nigg across the Firth.

“Well, yes,” came the reply accompanied by laughter, “It’s open alright – it has no roof…”

The path trailed quite steeply uphill. Then there it was, a sad looking structure built in 1783 for the Gaelic-speaking Catholics who arrived in Cromarty after the Highland Clearances.  Its history and usage is described here.

A tall slab of stone (the Emigration Stone) was positioned on Cromarty’s beach front in 2003.

It remembers how the Cleopatra and 39 other ships left Cromarty for the New World in the 1830s and 1840s. On it are engraved the words of Hugh Miller, Cromarty’s famous journalist, stone mason and geologist:

“The Cleopatra, as she swept past the town of Cromarty, was greeted with three cheers by crowds of the inhabitants and the emigrants returned the salute, but mingled with the dash of the waves and the murmurs of the breeze their faint huzzas seemed rather sounds of wailing and lamentation than of a congratulatory farewell.”

A moving tribute during desperately hard times in the Highlands…

need supervision. This is provided by Sheepman and the young border collie. Glen dashes along the fence lines,

pausing then to watch,

– as if counting all the sheep himself!  The woodlands that border the property provide excellent sniffing and exploring territory for an energetic sheepdog.

It was south (by about 14 miles) to Inverness one day at Scottish Sis’s insistence. “There’s a bookshop you must see,” she said… 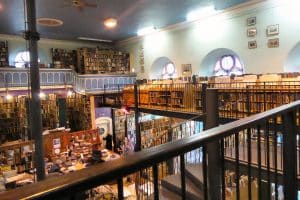 The River Ness runs for just six miles between Loch Ness and Beauly Firth. On a squally day a riverside walk in Inverness along to the small Ness Islands produced views of Inverness Castle,

and the towers of St Andrew’s Episcopal Cathedral.

But it was a northerly expedition to Golspie that provided surprising visual delights. Here Dunrobin Castle looks like a French chateau (its 1800s build)

although previous construction went on in the 1700s, the 1600s – and before that, the keep in the centre probably dates from the late medieval period.

It’s the historic home of the Earls and Dukes of Sutherland   Visitors don’t see every one of the 189 rooms in the castle, but what they do see is fine indeed.

And from the east facing windows there are views down onto to the spectacular formal gardens (note – 102 steps and some slopes down and the same back up!).

From the garden there is access to the purpose-built museum of family artefacts. Here there are many locally found Pictish symbol stones 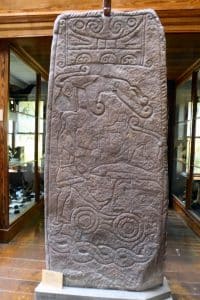 (and, not for the faint-hearted, many stuffed birds and preserved animal heads, trophies from the family’s hunting expeditions…)

Beyond the garden wall is the sea. From Golspie it is about 68 miles still to John o’ Groats, the very “top” of mainland Scotland.

In older age is it inevitable to be drawn to ancient places…?

The Priory ruins in the heart of Beauly village are hauntingly beautiful.

Time and time again though it is the stunning landscape that wins.

In mid-October round hay bales peppered the fields,

dark pockets of forestry contrasted with the paler ground, while scudding clouds played hide and seek with hills and heights…

Two other special memories prevail: first, being in the audience at Eden Court Theatre in Inverness to watch Scottish Ballet’s  presentation of The Crucible. What a stunning, shocking and thrilling production it was. Secondly, the Specials Board at Sutor Creek Café in Cromarty offered a mackerel dish, the fish fresh caught that morning. What a taste! What super flavours!

Thank you again, Scottish Sis and Sheepman – and until next time, Scotland, farewell…