Festival Marina, Stoke-on-Trent to Ramsdell Hall Railings: 8.9 miles, 1 lock
So Phase 6 of Cleddau’s Summer Cruise is under way. It was 16 weeks ago when in bitterly cold conditions Cleddau left her mooring on the northern end of the Macclesfield Canal, heading then for Chester and Ellesmere Port.  Summer eventually arrived, the coal bucket was buried in a cupboard and the electric fan brought into action. There was the first southbound transit of the Shropshire Union, the enchanting Staffs and Worcs Canal, the first trip along the Droitwich Canals, sunny days in Stratford, time in Warwick, further south to Braunston, then to Milton Keynes and back up the North Oxford, the Coventry and Trent and Mersey Canals. Oh happy memories! Now Cleddau is just a few days away from being tucked up back at Poynton.
Summer is leaching into Autumn: the sun is not so warm nor so high; the Captain talks of lighting a fire in the evening and the boat, it would seem, senses change too. Since being back on board a couple of days ago attention has had to be paid to a seriously shrieking fan belt (“You need another pair of hands for that mate!”), to a blown fuse in the shower waste pump and to a reluctant cratch-mounted tunnel light. Though all those were successfully tackled it is not so with the Webasto, which painstakingly produces hot water for radiators but none at all for domestic usage. Does Cleddausense that there is a winter project brewing and that change may be afoot… She is no longer a young thing, (built in 1989) and perhaps rebels against the prospect of change…
Ready for a 10am departure this morning all was set, yet the marina looked far fuller of boats than previously.

Black Prince run a hire fleet base at Stoke-on-Trent Festival Marina.  Boatwif was positioned on the bow to warn of obstacles; slowly the boat crept away from the pontoon, crept forward, forward, to almost touch nb Odette. Where two weeks ago there had been a forward view of the marina office now there were hire boats aplenty, five deep! The necessary turn from the pontoon could not be made.  The Captain entered negotiations with the hire company, nb Odette was moved and after a sharp right, a sharp left and a raised footbridge

the escape came!
“You’ve got a big fleet here,” Boatwif had suggested.
“Yes, twenty six boats,” came the reply. No wonder there was no room to move!
It’s good out on the Trent and Mersey hereabouts: the channel is wide, the water deep. There is little housing to see, emptiness where old industry has been cleared away and derelict buildings gradually disintegrating.

A pigeon dived through a window hole and a kingfisher flashed low out of the undergrowth. There’s a major rebuild going on at Middleport Pottery, business seems brisk at Longport Wharf (home of Stoke Boat Builders)

and it was peaceful enough at Westport Lake for a Canada goose to be taking a mid-morning snooze.

A mile further on comes the infamous 1.6 mile challenge of the Harecastle Tunnel.

Here last week Techno Son-in-Law had caused consternation. He and the (pregnant) Physicist had brought Cleddau this way. “How many people on board?” the Tunnel Keeper has to ask each boat skipper. ”Two and a half,” had been Techno’s odd reply. Today it was just two, the Captain and Boatwif.  The south bound boat convoy began to emerge and were counted out safely. In went the northbound convoy, Cleddau number three. It was a slow crawl taking 55 minutes (rather than the usual 40 minutes). What does one do if not on steering duty? Turn on all the internal lights of course, 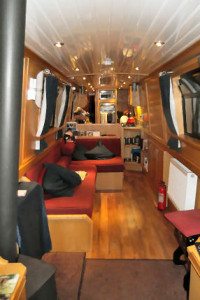 make a To Do list – and even resort to cleaning the hob. If sight-seeing from the deck beware of this – an alcove skeleton.

and soon there was the left turn onto the Macc

and past two favourite named boats May un Mar Lady and Flirty Gertie. 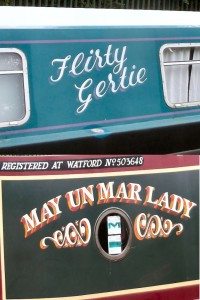 The canal passes over the Trent and Mersey via Poole Aqueduct towards Hall Green and its little lock, past Scholar Green, past the fine Ramsdell Hall

– to one of the finest mooring sites this side of Tixall Wide.

Grab a mooring here by the black and white railings, gaze across the Cheshire Plain, look up at the Mow Cop folly  – and walk across the fields to Little Moreton Hall!

Sensing seasonal change the Captain moved the table from starboard

tonight so as to light the fire. It’s rather nice to have toasty toes!

Tomorrow: to the bottom of the Bosley Lock flight.