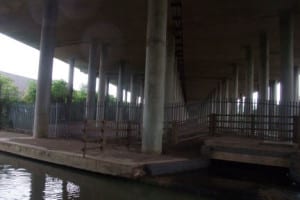 Thursday 26th August: east of Hillmorton Locks to Coventry: 22 miles, 4 locks
Mid-afternoon I may have been sent to Coventry: the fact that we were approaching it was the reason.
” Whose idea was this?” shouted the Captain, several times. I played the Deaf Ears tactic, as it had been mine… Things could have been better all day, so perhaps the rhetorical question was disguising steadily increasing despondency.
Rain had provided background noise throughout the night. With an eight hour cruise ahead to reach the Coventry Basin we were away well before 8 am. At the Hillmorton Top Lock there was no sign of human life although a pair of black sheep and a rabbit had been spotted. Everywhere was wet; there were deep puddles and turf as squishy as wet sponge. At Bottom Lock (the third) a boat below was undecided whether to moor, to turn or to come up. Having failed to moor (he wanted piling), failed to turn (he fought wild wind and lost) he opted for the Bottom Lock. Meantime, while pirouetting above the lock waiting decisions and actions by others the Captain’s much prized joy, the red and blue umbrella, had somehow lost its mooring and taken to the deep! Such set the tone of the day.
As we left the lock an earlier mystery was solved: the woman with a shepherd’s crook returned, swan tucked in a bag beneath her arm.
We cruise the waterways (perhaps trundle is a better word) under the metaphorical and actual Pembrokeshire flag. At Braunston yesterday a man speculated the flag to be of Swedish connection with a cross between a Yorkshire and a Lancashire rose. I put him right, the colours of sand and sea, Henry Tudor, Pembroke Castle, the Hands off Pembrokeshire campaign  – and on we went. But today has been spent in typical Pembrokeshire weather, at best drizzle on the face, at worst torrents down the neck, with a finale of unpredictable gusts as we were mooring up for the night. Perhaps it was the weather which affected decision-making across all of Warwickshire.There was a serious misjudgement at a bridge (own goal, one picture down). There was the palava at Stretton Stop where a little footbridge allows connection between two businesses and first crew couldn’t be landed, then pedestrians would not open it and then oncoming boats comandeered the space. Then there was the difficulty at a bridge-hole. Convention has it that the boat which arrives first takes priority – very reasonable.  A dayboat though, some distance back from the bridge-hole and with ample space to pause and hold proceeded forward, ramming us forcibly, although by then we were in reverse … Chased by a dayboat! We passed through tunnels at Rugby and at Newbold-on-Avon, and saw a mannequin in a garden further on.
At Hawkesbury Junction there were the familiar pylons and National Grid signs around the switching centre; in hot June the pub canalside garden was packed with customers; today not a soul. We completed the reverse S shape to negotiate onto the Coventry Arm, a waterway of some 5.5 miles length. Built for the transport of coal it is now promoted as the Greenway, a green corridor of cycleway, footpath, waterway and site of numerous art installations but it largely failed to impress. Some art, yes. Less rubbish than feared and quietly it creeps underneath the M6.  But there is masses of industrial land laid waste or flattened, the little activity there is coming from a few offices, scrap metal recovery or recycling schemes. One landmark, however, is the ‘Cash’s Hundreds’, three storey workers’ cottages with ribbon weaving workshops on the top floors (similar to those for the silk workers in Macclefield). At the Canal Basin James Brindley, canal pioneer, was there to greet us. From the galley window you can see him close up at his plans! A few shops and studios are here but there’s been an earlier than usual retreat inside: soup in insulated cups saw us through lunchtime, the wet gear is drying out – now we need to warm up!
We plan to visit Coventry Cathedral tomorrow morning and then move back towards Hawkesbury Junction later on.
FOOTNOTES:
1.     Quote from the despondent one: “Early judgment: perhaps the words are better than the place”. (Will provide more considered view tomorrow.)
2.     Does anyone else have memories of Cash’s nametape sewing marathons…?