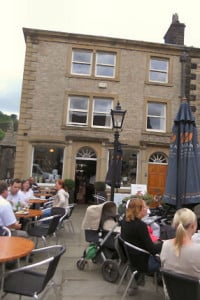 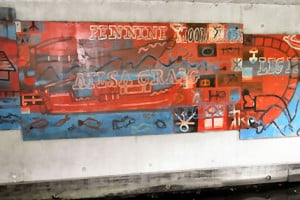 Uppermill (no miles or locks)

Sometimes even grey and blustery days can bring reward. Uppermill is a pretty village with a fair amount of bustle and a range of facilities. Last night one crew member sank rapidly “under the weather”, face and head a fire storm while body from neck down an out-of-control, shivering, shuddering wreck. The Midges’ Revenge!  At 8am the Captain established that Uppermill possesses a Health Centre just a few hundred yards away and by 9am he had bullied Boatwif into making a phone call.

“10.35 alright for an emergency appointment then?” said the receptionist. Perfect. But at 1020 the electronic booking system at the door didn’t recognise the booking, nor did the receptionist at the desk, but no matter, despite a crowded waiting room by 1032 a consultation was under way. Super-strong antihistamine, Deet and investigate wearing veiled hat… any one-time apiarists with spare headgear?! There was, of course, the small matter of declaring a current address while staying in the area: nb Cleddau, opposite Saddleworth Museum!

So that was the first silver lining: if you need medical help need it in a place where you can walk to a health centre. The second came as an observation when walking up the hill to the appointment. There on the same street was another bookshop, unnoticed on previous village wanderings. A return this afternoon was well worthwhile, not for purchases made (well, only one) but for the joy of perusing a spacious, well stocked and gloriously well organised shop. There were four shelves of poetry books, a wonderful array of UK travel books and lots more. Despite being (choose your phrase) used /pre-owned /second-hand all volumes were in very good condition. A third silver lining? Lunch at 63 High Street in a smart cafe, patronised, in the main, by stylishly dressed women.  Two other silver linings* came later: locating the bridge mural (missed yesterday) designed by pupils from Saddleworth School and depicting the canal’s Past, Present and Future. Then also there was a sneaky peek inside Uppermill’s library, the building, St Chad’s, once the home of an eccentric Victorian architect (and as at Marsden Library on Tuesday, a ladies only Book Group discussion was in full swing).

Walking back alongside the canal this evening Boatwif had a new companion, not a dog or a duck or a goose but a hen which determinedly picked its way along the cottage wall before turning at the bridge and making its way up the hill in a very self-possessed manner! Moored ahead of Cleddau, planning a Wednesday Standedge Tunnel passage, are two boats travelling together on a four month summer cruise, heading for Skipton. Both have come from Milton Keynes Marina, one of the boats crewed single-handedly by a very redoubtable lady.

The weather has been playing havoc with certain areas of the UK; tomorrow to Mossley (about 2 miles and 7 locks), hopefully ahead of the thundery rain and showers forecast for the afternoon…

*A final silver lining? In the fridge, as yet untested and untasted, pork and rhubarb pie from a local butcher…