Taft Bridge to Tixall Wide:  3½ miles, 2 locks (over several hours)
What is a very short distance took a long time this morning – but in delightful surroundings, with good-tempered company at both of the locks and in fairly warm weather there is no cause for complaint.
Cleddau had been moored last night opposite the pig farm (where there are alpacas too) and the farmer has diversified in a helpful way.  Buy less than 100 litres of diesel from his fuel boat alongside the field and the charge is a very reasonable 74p per litre. So the morning started with a diesel refuelling!
The canal then wends its way towards Colwich Lock, the Cannock Chase hills to the left and the few lucky residents on the offside bank must have spectacular views. Around the corner there was the back end of the lock queue…

Lock jams are not unknown here – and there were only four boats in the line ahead. So, kettle on, enjoy cups of tea or coffee and conversation with others in the queue. Time passed…              This lock

(it’s a few miles east of Stafford) is remembered aboard Cleddau as The Physicist’s lock.  When in April 2008 all haste was being made to move this boat from Newbury on the K&A to Adlington on the Macclesfield Canal several helpers materialised at various points.  Here had appeared mid-afternoon the Physicist with her own sleeping bag, having driven north from Abingdon just to work her passage through to Stone…
In a lock queue situation folk appear lock side, with or without windlasses. Some might just be passers-by; some might be rash and wind a paddle over-fast; some might be super-cautious and the process takes an age. Today at Colwich it was a case of a super-cautious paddle operator at one end and a helpful though relentlessly informative Mr Public Transport Expert at the other…
Released from Colwich Lock 75 minutes or so after initial arrival, on Cleddaucruised, now towards Great Haywood Lock. The grounds of Shugborough Hall appear on the left.  Then from a bright and shiny boat came a cheerful wave – Geoff and Mags, on their newly painted boat Seyella.

(Read Geoff’s summary of his boat painting on his post of Wednesday August 14th.)
Great Haywood lock queue was slightly shorter. Into the lock from above came the beautiful slow thud thud of a traditional engine. “Beautiful sound from your boat engine,” Boatwif suggested to the accompanying crew.
“It’s my husband’s pride and joy,” she said. “He’s a sound engineer, bought the engine for its sound, then we had the boat built around it.”
Soon the familiar left turn at Great Haywood Junction could be taken.

A mooring on the Staffs and Worcs Canal at Tixall Wide – but would there be space? There was!

As the evening’s drawn on there’s been barbecue smoke drifting back from the boat ahead, on another the occupants were playing cards and on the wooden cruiser a guitar and flute duet was being rehearsed.

A stroll round Shugborough Hall grounds proved irresistible this afternoon – the ancient Essex Bridge that crosses the Trent,

the Tower of the Winds, 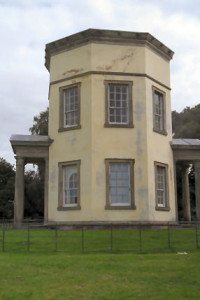 – all rather different from the garden features observed from the back deck over the last couple of weeks.
To moor near Great Haywood and NOT pay homage at the Farm Shop?

Of course not – there’s a fine butchery counter there now and the butter garlic chicken kebabs were pretty tasty tonight!

Tomorrow: back to the Junction and onto the Trent and Mersey, heading for Stone