Just round the corner from Runnymede the county boundary changes from the Royal County of Berkshire to (unroyal) Surrey.

The four hours or so cruising on Friday to Shepperton Lock and the junction for the River Wey were characterised by words beginning with the letter H. It was a stop-start sort of affair, stopping to refill water tanks, to dump rubbish and to use a sanitary station. Then at Staines the Captain performed the boating equivalent of a hand-break turn, using reverse throttle to swing across the river, turn and take on diesel from a fuel boat.

A mile or so further on came a surprise Hoot, hand wavings and “Hi”. Cruising upstream was a familiar boat, George and Carol on their widebeam Still Rockin’ . 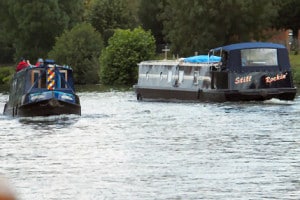 (Last January there had been a face to face meeting with them ).

As you pass underneath motorways you don’t always see vehicles but you usually hear the noise: there was the M4 near Maidenhead (Wednesday 29th July), and on Friday (31st July) the M25 near Egham and Staines, followed an hour or so later by the M3 near Chertsey.

Noise-wise the greatest hullabaloo was probably that heard when passing under the M25 (again), this time on Saturday (1st August) near Byfleet.

After several days heading towards London the sight of elaborately rebuilt properties on small plots of land was no longer a novelty.

However, these once small post-war houses seemed to have undergone some degree of transformation.

What was novel though was the presence of houseboats, some old, some very modern, some quaint, some eccentric…

It was at the final lock of the day, at Shepperton, that the impressive hotel boat Magna-Carta,

was met. Check out the facilities and prices here…

Hours later, moored for the night opposite Shepperton Weir,

there was another contrast in scale. A retired solicitor begged permission to tie his punt up alongside Cleddau before taking his car back home.

“So you think your boat is narrow,” he remarked wryly as he punted his slim vessel off home along Desborough Cut.

this was not the USSR but the queue to access the channel to approach Thames Lock to pay the licence to cruise on the River Wey Navigations owned by the National Trust… (It took 130 minutes from untying ropes at Shepperton to travel less than half a mile and join the River Wey at Weybridge…!)

After the Thames the Wey is narrow but also curvaceous. The river navigations (combining stretches of the fast-flowing River Wey with slower flowing canalised sections) run for 19 miles between Godalming and Weybridge. There are mills, this one Coxes Mill,

and weirs. Each lock is clearly named and information added about its significance.

Near RHS Wisley is The Anchor pub,

a busy location early on Saturday afternoon. How many times will the same “How far have you come?” question be posed. Sometimes you give the simple answer: “Well, we were moored last night at….” But a longer question and answer session always ensues if you say: “Well, we started in May about 20 miles south of Manchester…”

Not far after Pyrford Lock was a great surprise. Moored up was No Problem.

There was Sue on the stern, camera to hand, she about to set off with “the girls” (her two border collies) for an afternoon walk.

Onward, the riverside scenery becoming increasingly delightful. Memories stirred. Just across the fields from Newark Lock is the shell of Newark Priory, dissolved by Henry VIII .

It’s haunting appearance invites closer exploration but the site is on private land and you can get no closer than the towpath. A glorious open meadow just beyond Newark Lock was a wonderful overnight mooring,

the space shared by fishermen well into the night…

It was but a short distance on Sunday to Send, past winding meadows there to meet some of the Tentatrice Surrey-based family.

The New Inn was a popular spot: families gathered, canoeists paddled by or landed but weekend hire boats repeatedly sped past.

After the stern had become unhitched and repinned, the bow too worked loose. What else was there to do but drive in the mooring pin even harder – and cross-pin it with not one but two extra mooring stakes!

Onward on Monday, through more delightful rural scenery. Weedy and reedy in parts the river wriggles its way along valley bottom, past a fine estate, through tree-lined stretches, round acute-angled turns. This is a waterway where stationing a crew member on bow lookout duty is advisable…

On approach for Dapdune Wharf a towpath voice declared: “You’re about 250 miles off course…” This was another Monkton Moment*. “My middle name is Picton,” the speaker later confessed. “Just back from a reunion. We stayed at Bluestone. A lot of us. Some came from America. There was a banquet in Picton Castle”. Aargh, a Picton clan gathering then.

is a National Trust site which illustrates the building and the business of the Wey barges which transported cargos between Guildford and London. (more on that next time).

After two nights the cruise continued, this time with an extra crew member on board Tentatrice.

Out through Guildford, under bridges,

past a rope throwing wharf worker

(THE SECRET OF GUILDFORD’S SUCCESS says the nearby sign), through parkland to Millmead Lock. It is interesting to realise that both the Wey Navigation (1653) and the Godalming Navigation (1764) preceded the canal building period in the Midlands and the north.

To Godalming , via four more locks, a glimpse of sandy soil,

to assist the passage of horse-drawn barges and an overnight mooring on a meadow just opposite the entrance to the Wey and Arun Canal.

(See here for details of the plans to restore the canal to navigation).

Slowly, oh so slowly, Cleddau crept towards Godalming. This beautiful river, tamed by the massive weirs,

is tranquil, delightful. Trip boats from Farncombe Boat House are popular, as are rowing boats. The crew of most small boats, faced by something bigger and significantly heavier than themselves, take cover, like this.

weaving to and fro across the river, heading a boat queue all the way up to Catteshall Lock,

where here the picturesque scene was providing inspiration for a dozen or more artists.

So, just after midday on Wednesday 5th August, after 348 miles and 239 locks, Godalming, Cleddau’s southernmost destination was reached.

and a youngsters’ canoe club. Fun and laughter filled the air – and as part of a submarine game water filled their boats.

Back to Guildford on Friday, onto the Thames by later next week.