Day 6: Not speeding on a blustery day

Was Wheelock damned with faint praise in the previous post? In her search for items of interest in Wheelock Boatwif overlooked the very obvious: Barchetta  .

is now occupied by a fine Italian restaurant which serves simple pastas and pizzas between 5 and 7pm but offers a more extensive menu for evening diners.

Despite passing it many times the success of a first meal there a few weeks ago inspired a repeat visit. A delightful environment, friendly but not obtrusive service, choice from a wide range of dishes including a Specials Board and no pressure either to place an order quickly or to finish swiftly. A lively conversation with other boaters, a British and Polish crew, completed a relaxed and enjoyable evening. May Barchetta still be serving great food when Cleddau returns this way in 2018…

A dire weather forecast for after 1pm put pressure on the Wheelock services area this morning as boaters sought to fill and empty tanks, to off-load rubbish and then proceed onwards before the weather deteriorated.

There was nb Turnhurst again,

a boat first encountered at Red Bull. It’s a short dayboat, being used by Canal and River Trust to carry a pair of engineers along the canal to inspect every lock, culvert and bridge.

It zigzagged across the canal: “They wanted to look at the offside,” the helmsman groaned.

Onwards. There are no paired locks north of Wheelock so boat queues are more likely. What is there to look at as the canal wends its way across the Cheshire Plain along a three mile pound?  There’s a very big veg patch at one point,

– and at Ettiley Heath, squeezed between the canal and the railway line, a huge amount of new housing.

Then comes Crows Nest Lock (what a delightful name). 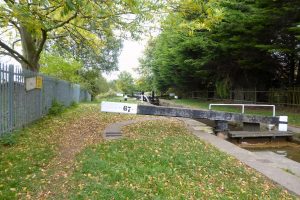 The sighting of a boat just leaving the lock meant that this was a queue situation. Cleddau was lowered in the lock, aided by a crew member from a boat behind.

Below the lock stands an attractive building, was it once a mill?

Not far beyond Crows Nest lie the industrialised outskirts of Middlewich.

Three locks over the course of two miles takes the canal to King’s Lock and the junction to the Middlewich Arm. It’s a bleak stretch, marred by a busy road, chemical works – and today by blustery westerly winds. Heavy cloud cover seemed to foretell the onset of darker days…

For years The Kinderton Arms opposite Rumps Lock lay empty. 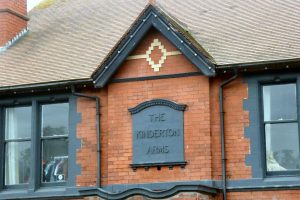 Then in the last couple of years it’s undergone a transformation into a Thai restaurant. Last passed this August it was closed while the owners spent a month in Thailand researching new tastes and dishes. So what is happening now? Bricklayers were clambering the ladders, carrying breeze blocks on their shoulders – and then disappearing into a void made on the end of the property…

This travel by slow boat does allow a peek into other folks’ lives!

The final approach to King’s Lock is wide and often noisy from the road that runs alongside. It must be a temptation to speed along that road (Booth Lane), as there by the (famous) Fish and Chip shop stood a policeman

, armed with a speed gun.

Unlucky – or reckless – a woman in a red car was flagged down and escorted to the waiting police car… No chance of Cleddau breaking any speed restrictions on this run;

and occasionally while another boat rose.

onto the Middlewich Arm. It’s a tight turn, but appreciating the shelter from the wind the Captain skulked under the Junction bridge hole

and waited for Wardle Lock to be readied for him. Into Wardle Lock came Goblin, a Dutch barge style boat. As the Captain espied the mass of it leave the lock his only course was to back up – and cope!

Up Wardle Lock. After going down 44 locks since leaving Victoria Pit this was the first one going up.

You can feel a bit smug if you’ve managed to moor up before the forecast rain arrives. At 1320 there was relief and a degree of smugness aboard the good ship Cleddau!

Distance and locks still to do: 6½ miles, 1 lock