Cleddau is on an Autumn cruise.

It’s a one-way trip: she’s off to spend the winter at Aqueduct Marina (near Nantwich) where she will be sand blasted (ouch!) and repainted. She’s going early while the weather is reasonable and before winter lock closures affect the Macclesfield Canal.

As the crows (or the many Canada geese) fly, the route is a north east to south west diagonal across Cheshire – except that via canal there’s a lot of south, a fair amount of north and then a heading generally west…

This boat trip is more a project than a holiday cruise. Stuff (boaters, you know about stuff that accumulates on boats) has to be removed to allow clear access to the hull. Already the house is filling up with boat bedding and the contents of the bookshelves, while into the garage is being squeezed poles that need painting, non-essential engine room equipment and paint pots galore… Meanwhile, on board, breakable stuff (much of the contents of the shoulder height glasses and mugs cupboards) has been slimmed down, the bulk of it wrapped and packed in the lockers below the dinette sofa.

This project is an exercise in logistics: two cars were driven from Bedfordshire to Aqueduct Marina (M1, M6, M6 Toll, M6…) then one car continued across Cheshire (hallo, why that’s a close pass of Jodrell Bank)  to Higher Poynton via Macclesfield (which allowed a half hour catch up with this week’s news from The Cheshire Three).

It was a glorious day, cloudless, windless – just the best sort of day for moving a narrowboat. 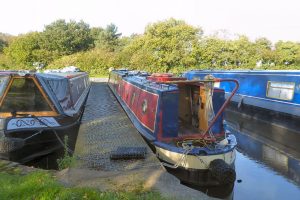 “Not a bad day…” nodded the chap washing a Braidbar boat, moored beside the towpath. 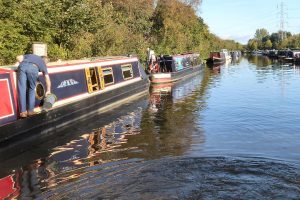 Three minutes into the start of the cruise there was a delay; slowly, slowly, slowly a boat was being turned just in front of Bridge 15. 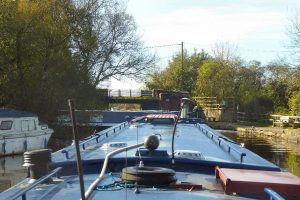 It’s not an easy winding hole, as Cleddau and crew learned one day in blustery conditions, but soon the journey could be resumed, along past the wide and shallow water of The Deeps, 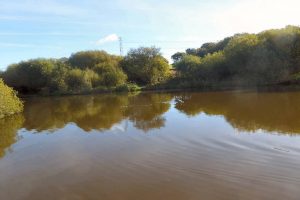 again to be greeted with ”Not a bad day…” The sun was shining, the wind wasn’t blowing, the rain wasn’t falling and, in striking British understatement, it wasn’t a bad sort of day…!

Closer to Macclesfield the same greeting came again – “Not a bad day…” To be fair, it was a pretty good sort of day: there were stunning views of Cheshire hill country, 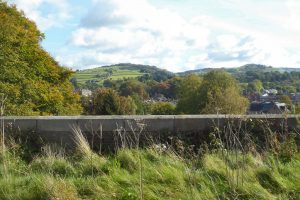 clear evidence of a pithead plantation 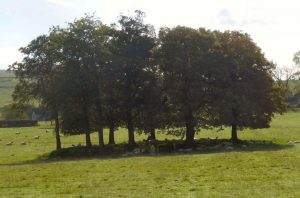 and more signs of a thriving operation at Bollington Wharf. 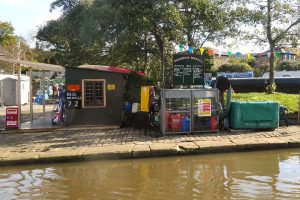 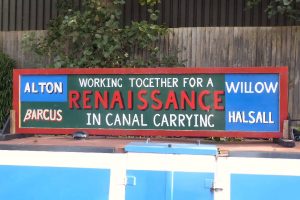 There was even a rare opportunity to moor on the new Macclesfield Town pontoons (look, permissible for three days and 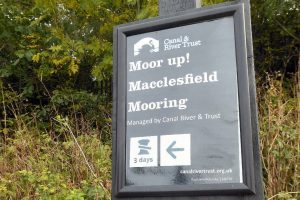 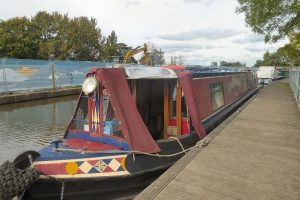 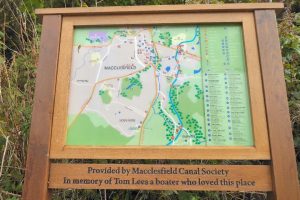 very convenient for a dash up Buxton Road to a nearby Co-op store).

There were occasional delays due to a loose swinging boat, 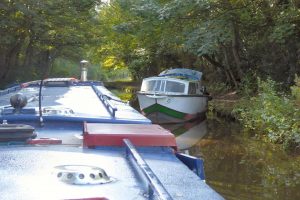 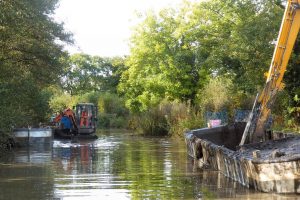 (“Did you get my best side?” enquired a shovel operator) 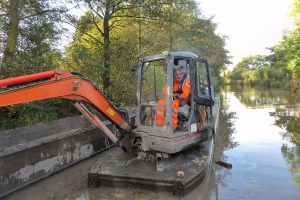 and a near collision at the Broadhurst Swing Bridge (blind approaches from both directions).

At Sutton mid-afternoon the skies were filled with Canada geese in classic V-formations, 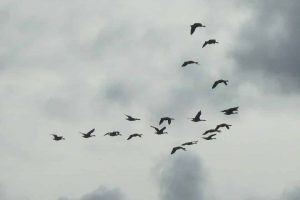 circling and swooping, before one flock lowered and lowered, coming in to land, to graze, clear of the cows and sheep.

Onward, through Broadhurst Swing Bridge (still left open) to the Oakgrove electrified swing bridge. Road traffic was busy; were any of those nine car drivers held up by the operation of the bridge quietly fuming at the delay? Who knows…? 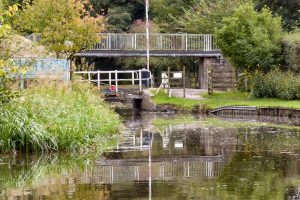 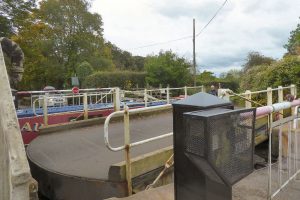 The warmth leeched out of the sun and by late afternoon there was a chill in the air. About five hours after departure the moorings above Bosley hove into view. And with sight of the hill mass of The Cloud directly ahead who wouldn’t want to moor up here? 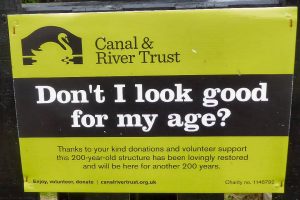 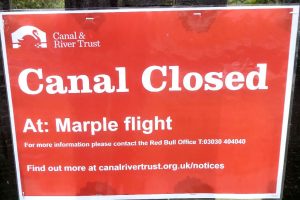 of the inland waterway systems.