Grass cut front and back, meetings met and minuted, clothes and gear assembled, car loaded – and at last, after months of winter planning, the Cleddau crew were ready for OFF.

Spring-time has been busy with trips to Pembrokeshire and Scotland; the Captain’s voluntary work consumes great swathes of time and cartridge ink, but now the Summer Escape has begun.

It was at ten to four on Friday afternoon when Cleddau was reversed back from her mooring pontoon.

(Ten to four?  Why, that was final bell time in long ago school days. There’s a feeling aboard, felt then, felt now, of being let out, of running free…)

The waterways route from Poynton is familiar: north up the Macclesfield Canal for a couple of hundred yards, do a three point – well, a six point turn in this instance –  and then head south.

Bridge 15 had just had a face-lift,

a paint job. How smart the railings look now. By late afternoon Cleddau was cruising away from Victoria Pit Moorings – the name a reference to the one-time coal pits in these parts, each shaft remembered now by a copse of trees and a stone marker.

A couple of hours passed and the day grew cool; mizzle hung in the atmosphere, quickly becoming heavy drizzle.  No further then on Day 1 than the Bollington Aqueduct,

barely a stone’s throw from Clarence Mill. A pot of tea and a lit fire were deployed to restore warmth to frozen fingers!

It was Spring and Summer on Saturday: inquisitive lambs 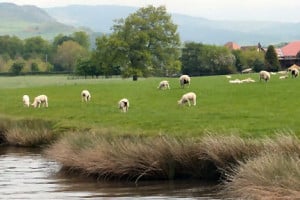 scampering rabbits (and a dead one in the canal), ducks and ducklings, protective Canada geese and fluffy goslings,

the alligator and the gorilla,

a herd of cows

(and a painted singleton),

It was slower through Kerridge than usual, but then usually one doesn’t meet an unmanned boat swinging free from the bank.

Bosley.  The Bosley twelve locks are spread out over about a mile.

Would the Cleddau crew  cope? Since last this way a gammy knee, a torn Achilles tendon and a fractured wrist had beset Boatwif and the Captain.  Perhaps it was the sun that brought them good fortune: locks mostly already filled, just right for going down, and helpful gongoozlers eager to push gates

and wind paddles. “We did it in an hour and thirty five!” exclaimed the Captain at Lock 12 at the bottom (when two hours is an easy estimate).  There was, too, the first Monkton Moment* of the season. “Are you from Pembroke?” called a towpath walker, followed later by: “My wife wants to know how you got here…”

By mid-afternoon Cleddau was comfortable in a new mooring place;

there’s an open view of The Cloud (1126 feet) and a grassy meadow across the canal.

On Sunday: into Staffordshire and onto the Trent and Mersey Canal

Monkton Moment*- a reference to / recognition of Cleddau’s Pembrokeshire connections.