Rowington to Hatton: 3.1 miles, 1 tunnel  (plus a three mile walk)
To Hatton Locks then – and decide on a plan when we get there…
Other boats moored on Rowington Embankment had already departed. By 10am Cleddauand crew were off along the canal towards Shrewley Tunnel, recalling last night’s warning from another boater that it is “very wet inside”.  Just beyond the first bridge a pair of contractors was strimming grass 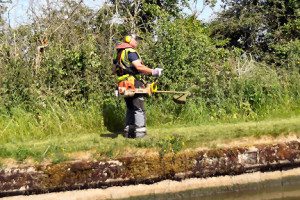 – from then on a green carpet was spread over the water…

Shrewley Tunnel and its towpath running through a tunnel at a higher level hove into view.

It’s wide enough for two narrow boats to pass each other so it was lights on (including the new hatch-mounted spotlight) and keep going.  At 433 yards long and with a very high roof it presents none of the discomfort of, say, a 40 minute transit through the one-way Harecastle Tunnel – or the tortuous sub-Pennine Standedge Tunnel.  And as predicted by yesterday’s Job, heavy water drops dripped from the tunnel roof, blotching Cleddau’s polished paintwork!
Easy mooring along metal piling (and in shade) was available above the Hatton Locks. “Let’s lock up the boat, potter along and take a look,” suggested the Captain. There’s an oral checklist to these potters:  “Hm, mooring rings here, for the permanent moorings; water point –ooh,  two hoses at a time; services – rubbish and sewage disposal.”
A lock keeper was on duty at the top lock and a boat going in.

On a wing wall is a Transport Trust plaque.

The Hatton cafe was doing a roaring trade, all the tables outside taken by ice-cream licking, cool drink sipping folk. 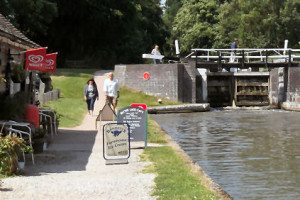 Proceed down the towpath, there’s an information display on the right,

canal and locks on the left. There’s a pond opposite the Hatton C&RT offices, a dainty demoiselle poised on a sculptured grassy blade.

The towpath changes sides, and ahead stretch the locks downhill. Dog walkers, health walkers, meanderers, gongoozlers and lock operators vie for towpath space.
On down the hill – in the heat. “Let’s stay here tonight,” said the Captain, “do the locks tomorrow.” Agreed.
“If we walk down towards the bottom we can get a paper at the garage”. Agreed.
The stroll continued, a lock gate closed here and there by way of helping others.  A  lively conversation was struck up:  they continuous cruisers – boat now sold – last trip to Stratford – moving to Skye – a Braidbar boat. A Braidbar boat? There below, rising slowly was the beautiful Mi Amigo, spotted last June near Stalybridge.

There are acquaintances and places in common. This was a conversation that could have gone on and on but the boat needed to continue its hill climb and the Cleddau crew its downhill walk.              Hot – sunhats

Hot – snoozing on a lock gate

Near the bottom of the hill there was the little path to the Shell garage. But now it is being demolished!

Work started a week ago. “Try the village store in Hatton Green, “ suggested some lady walkers. Hence, via a very tight squeeze past the contractors’ fencing, a very hot walk up the hill and through an extensive modern housing area,

a shop was found. There it was, a modern convenience store, overlooked by impressive buildings, originally the Warwick County LunaticAsylum,

now apartments .
Back to the canal, arriving at Middle Lock: from here you look up the hill at the sparkling white pillars which encase the paddle gear. To canal folk it’s known as the Staircase to Heaven, that’s the locks going up of course,

but for those boaters descending is it Steps to Hades…?
Up the hill, the locks still being worked.

Shade on the left, the cafe in sight. Did it matter that the wait for a lunch was half an hour? No – after all, now there was a daily newspaper to peruse!
Tomorrow: downhill to Warwick (or to Hades…)