Tixall Wide to Stone: 10¼ miles, 4 locks
How the sun sparkled on the waters this morning;

how lucky the crews of two day boats hired from Great Haywood must have felt as they came upon this delightful setting.
Cleddau’s route today involved a return to Great Haywood Junction and a left back onto the Trent and Mersey Canal, heading, as the sign indicated, for the Potteries. 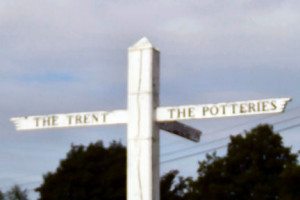 Not far along was nb Moore2Life 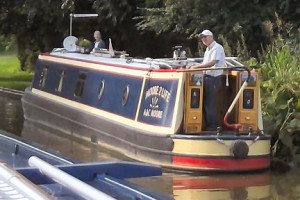 and there was a wave to Ann and Chas; it’s about five months since the frozen Cleddau crew were invited aboard Seyella one afternoon near Little Moreton Hall towards the bottom of the Macc.  Chas and Ann were there too and the hot tea, warm fire, scones and cake went down very well.
On the opposite bank the Canalside Farm Shop has extensive poly tunnels. 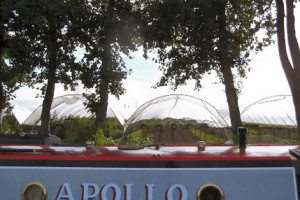 Perhaps Pick Your Own doesn’t involve backache here!
It was at Weston lock, the second lock of the day, that there were a couple of Welsh moments. The boaters ahead had gone to prepare the lock; another boat was coming down. The gates eventually opened and as the emerging boat drew abreast an Australian voice called “I’d thought I’d meet you today – I read your blog.” Australian voice and flag on the stern, but Welsh dragon painted on the boat…

This was nb Ferndale; though the boat says Ferndale of Melbourne Diane was born in Ferndale in the Rhondda.
The lock was recycled; out came the next boat, a crew member on the stern gazing sternly at Cleddau. “Is that Welsh?” she called. Yes, river in Pembrokeshire… and the boats drew apart, hers round the corner, Cleddau at last into the lock!
Weston gives the impression of being a much cared for place. The new housing has gentle views across the canal to fields through which the young Trent flows and to clumps of trees beyond. A group of bungalows (local authority) displays solar panel arrays, a feature seen further along the canal in Stone. But it is in Weston that you catch sight of a star garden feature, the back cabin of a butty, a wonderful “playhouse”. 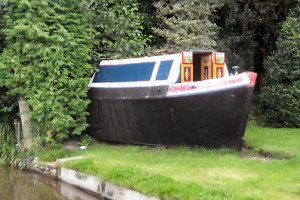 Further on is another prize winning garden feature, 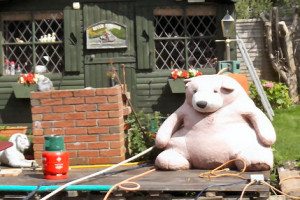 surely the largest outdoor teddy bear!
On past the unusual Salt Bridge, through Sandon Lock to Aston. The large marina here is popular with continuous cruisers seeking winter moorings.  Beside Aston Lock is another of the frequent T&M Canal milestones: 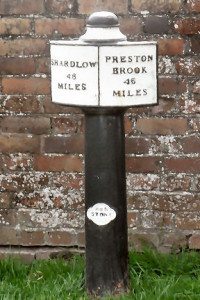 just look, this is about the midpoint between its two end points, Shardlow (near Donnington Park in the East Midlands) and Preston Brook in the north west.                 And so to Stone…  “No mooring spaces left in Stone,” a boater at Aston lock had declared. The boat crept towards the town, and just by the Welcome notice,

about half a mile from the town itself, a space was found. The bow is comfortably cushioned in reeds but it’s a pleasant spot.               Stone is a colourful place, a stalwart and successful contestant in Britain in Bloom contests. Street railings are flower bedecked 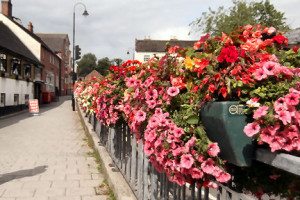 and there are striking waist height floral street displays too.

By late afternoon a  small market along the pedestrianised main street was just winding down; a pavement bar on the square outside the library and one or two street cafes were still attracting customers but the Captain had a better plan. Down to The Star pub he headed, it situated right beside Stone’s bottom lock. 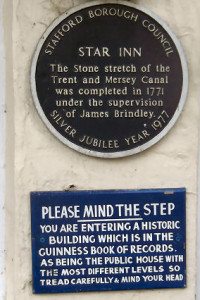 It’s famous (for Terry Darlington readers) as the pub where he and his whippet spent much time but also for its appearance in the Guinness Book of Records! 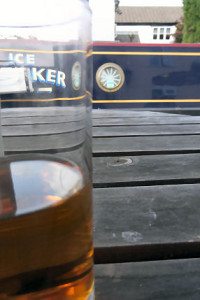 What else could one do but have a drink and watch some boats pass through the lock…?

Tomorrow: to Barlaston (near the Wedgewood Visitor Centre)