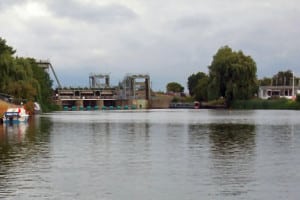 Friday 13th August: Ely to Upwell, 23 miles, 2 locks
“Be quick, we’re losing the tide,” said the lock-keeper at Denver Sluice. So we surged forward, down the tidal stretch, avoided the oh so slowly departing boat coming from Salter’s Lode Lock, turned left – and a minute or two later another memorable phrase: “That’s the best one we’ve seen all week.” There is a feeling of relief and success when tidal waters and tight lock turns have been negotiated, especially in strong northerly winds and showery outbursts.
It had been an early start: before 7am the boat was reversed out from its mooring and moved a couple of hundred yards further along to a water point. Filling took time, but now I can contemplate a sock wash once there is chance of a dry enough spell for wind-blowing dry…  We have the wind – how cold it has been today.  On the equivalent route outbound in late June compulsory garb was sunhats and sunscreen;  today, mid-August, initially rain hats and waterproofs but fleece layers, gloves and life jackets were added during the day. Even gaiters found their way out of storage and onto legs!
The river beyond Ely is wide and straight: it is the home training water for the Cambridge University boat crews. If a child were designing a landscape this is exactly how it might appear on paper, straight lines of the river, straight A road one side, straight railway line the other, a few houses and perhaps a simple church… Eventually the massive metal structures of Denver Sluice looms ahead.  Here the water levels all over the fens are monitored and determined. The Earith lock-keeper two days ago said it’s a great job for people who’ve always poured water to and from plastic cups in the bath. Running in at tidal level is the straight New Bedford River or Hundred Foot Drain. Beyond is another straight wide stretch, the Relief Channel to the coast. Our given lock time was 1230, we were the third boat through and from the river we went up to the tidal level. Half a mile downstream at Salter’s Lode it was down to the Middle Level. The state of the tide was particularly important for two of the boats following us: both longer, needing to pass through Salter’s Lode on equal water levels. Hence the Denver lock-keeper’s remark.
Other straight lines –  wind lanes on the water of the Great Ouse before Denver, the Middle Level Main Drain we crossed via an aqueduct and nearby it a field of various colourful stripes, the product of flower growers.
Two other slightly disconcerting comments of the day.  First from the Captain (aka Catering Officer) on bringing a cup of tea in an insulated cup to the back deck: ” Erm, I think we may have only one teabag left!”  But a crisis was averted as I knew precisely where other boxes of teabags had been squirreled away. And then the Yorkshire boater explained that on his way to Bedford at Denver he took a direct route down the Hundred Foot Drain, thus cutting out about 18 miles. ” No problem,” he said “except I hit a dead cow”.  His telephone report to the nearest lock-keeper brought a very swift response: he was buzzed by a police helicopter…
We seem to have swapped the noise of the freight trains for the noise of road traffic; Upwell is a strip village: houses, road, Well Creek (the waterway), church on a high bank -classic fen settlement.
Wi-Fi signal is almost non-existent here, so you daily readers may have to wait a little until we can transmit.