Surprises tend to come in one of two forms – nice or nasty.

A nasty surprise which curtailed Boatwif’s ‘Back to Boating’ trip in July was a broken wrist… seven weeks on another Back to Boating attempt is under way.

Determined to mix recovery with practicalities and a birthday celebration the Cleddau crew returned to Cheshire, moved back on board and enjoyed a delightful Sunday Bank Holiday stroll from the home moorings up into Lyme Park.

It was a crisp and clear day.  There was Manchester, due north, dead ahead, with views into Lancashire beyond.

To the east sunlight sparkled on the Peak District

and over to the north west stood the refinery at Runcorn, the higher ground of West Cheshire and the hills of north Wales. Close by a movement in the grasslands caught the eye – a stag among the sheep… 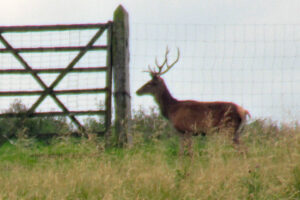 Back at the boat that afternoon something was amiss – there was a distinct lean to the left, the port side. Why…? Were the mooring ropes too tight…? No.

Inside the cabin the galley sink seemed higher than the fridge. Anyone sitting on the long bed settee would be in danger of slipping off. The water pump kept cutting in as if a tap had been turned on.

“It must be water,” the Captain pronounced. “Water in the bilges.”

There’s an inspection hatch in the base of the bathroom cupboard. And there below nearly an inch of water swirled in the metal channels at the bottom of the boat… So it was water putting the boat on a lean.

But how did it get there?

An analytical approach helps in situations like this. Water pump off. Tick.

The Captain swiftly emptied the stock of metal windlasses from the front step lockers and heaved the steps backwards into the cabin. The area under the front deck could be accessed now. Think of it as a crawl-in cellar. Out was heaved infrequently used paraphernalia so that the investigation could continue. And there in the dark recesses was more water, dripping steadily from a cylindrical tank and making its way around the underworld of the boat.

Was the hose between the water tank and this cylinder at fault? (It’s an accumulator tank that pressurises and regularises the water supply system) Replacing the hose made no difference to the steady dripping and leaking… So the cylindrical vessel was the culprit – it would need to be changed – AND the water under the floor needed to be pumped out.

A text appeal was made to Leek-based marine engineer Ed Shiers – and wasn’t this the best surprise birthday present that Boatwif never knew she’d wanted…!

Meanwhile water was pumped out from under the bathroom

and from under the wardrobe. 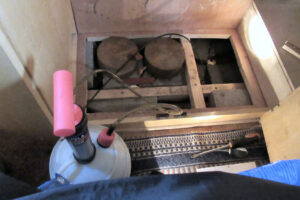 Thanks be to Jaq (previous owner of nb Valerie) who had recommended a Pela vacuum pump. Stats-wise that nasty little surprise involved the removal of 144 litres of water (32 UK gallons /40 US gallons).

Finally, just after midday on September 2nd, the 2020 cruising season could begin. Diesel was topped up at Bailey’s Trading Post

It was a wet cruise to Macclesfield (a nasty surprise) where a mooring with reasonable road access was essential. An Italian Take Out birthday dinner with the Cheshire Three plus a Cal Clan lunch time interlude (Californian time) made for the whole evening being a very pleasant (nice) surprise,

Reservoirs – remember mention of reservoirs here. There‘s been another one to explore.

A walk up through Sutton village became a reminder of this weekend 8 years ago when the place was populated by scarecrows. The first weekend of September is traditionally Sutton’s Flower Festival weekend, cancelled this year of course, but there are still scarecrows about… 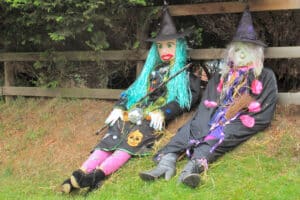 Out on a footpath across the fields, heading southeast. There were streams to avoid,  boggy bits to negotiate and eventually a steep road to cross. Then came a glimpse of water and

a path that leads around Sutton Reservoir towards the dam wall.

This reservoir is another feeder to the Macclesfield Canal. 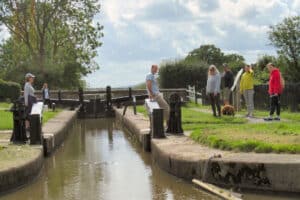 The Cheshire Three are experts

and their local friends had aided Cleddau’s Bosley descent in April 2019. (See here ). According to the Captain, who’s a numbers man, the transit was in record-breaking time, 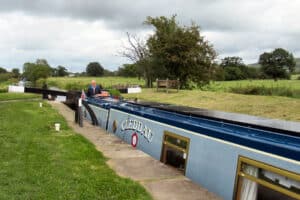 Shock, horror – the beautiful painted cow, long term resident at a canal side farm between Bosley and Congleton, is no longer there…

The Cloud (a distinctively shaped hill which stands 343 metres /1,125 ft above sea level) dominates the landscape in these parts.  It was good to see it again, from the locks,

from an overnight mooring near Bridge 65

and in the morning when (surprise, surprise) two hot air balloons hung above it…

in dry periods, in rain showers, in torrential rains… Local points of reference such as the Ramsdell Hall railings were a familiar and welcome sight 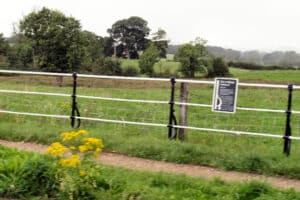 but in a sudden deluge Ramsdell Hall itself and nb Chouette were barely visible.

Hall Green lock (a useful “training lock” at 12 inches depth and a greater than average length) was safely negotiated and a mooing found  a half mile further on at Red Bull Aqueduct.

So, by September 6th Cleddau had finally cruised the complete length of the Macclesfield Canal for the first time this year.  From here on it’s a different canal (the Trent and Mersey), a different county (Staffordshire) and the rust red waters of the Harecastle Tunnel.

The cruise plan is subject to constant review. Initially Cleddau will be south bound to Tixall Wide, from where the journey may continue as a clockwise cruise of  the Four Counties Ring…

Umbrella usage in rain at the stern: frequent