The River Wissey is another so far unexplored East Anglian river.

Like the Lark  and Brandon Creek  the Wissey feeds into the Great Ouse.

“While we’re here shall we explore the little rivers?” the Tentatrice First Mate had suggested.  Boatwif wouldn’t admit to a Tick List syndrome – but there is a chart on her computer of waterways so far explored – and this year the Cam, the Little Ouse and now the Wissey have been added to the “Boated” column.

It took about 70 minutes and 5¾ miles to cruise up the Great Ouse from the mouth of Brandon Creek (the Little Ouse) to the Wissey on Wednesday.

Back on the wide water of the Great Ouse things seemed very large – boats,

Then to the right (heading north) comes the sign for the River Wissey. 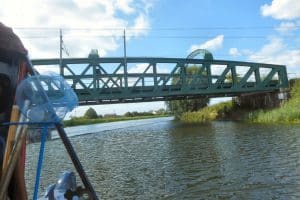 – and crosses the Wissey too.

Two stretches of GOBA moorings close to the mouth are delightful 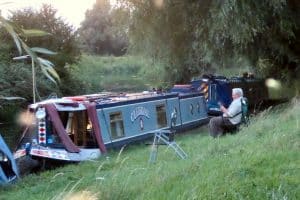 – and were as pleasant a place as any to sit out the very wet weather on Thursday.

When the rain finally stopped a late afternoon walk revealed the black silted earth of pancake-flat fields behind the flood bank,

Yet the water is deep and clear. About 2 miles upstream is Hilgay, reached after passing a line of moored boats on the right hand bank.

There are two road bridges, one a local road and one the ubiquitous A10.

Then there are more moored boats

and thick belts of trees after the bridges.

Somewhere, in the back of the mind, stirred recall of a conversation about the vast number of trees in Norfolk, planted both to soak up water from flooded land and to create windbreaks.

Ahead appeared an attractive building – a remodelled mill? A pump house?

(It was a pump house according to the Imray guide book, though unnamed).

Winding, weaving, twisting, the little river goes, in a mainly easterly direction, with glimpses appearing of a vast industrial site.

This is the Wissington Sugar Factory, (history here). British Sugar claims that this is the largest and most cost-effective sugar processing plant in Europe. It’s an innovative business, being the first UK bioethanol plant. Almost hidden from river view is a vast glasshouse powered by the heat from the sugar beet factory processes.  Dig into the British Sugar website  and you’ll discover that the glasshouse covers 18 hectares and is the largest single glasshouse in the UK. 70 million tomatoes are grown here each year, apparently… 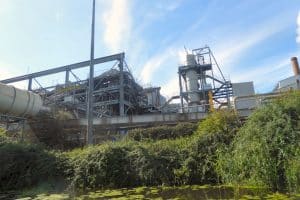 comes the sharpest of contrasts, the river broadened to lake proportions 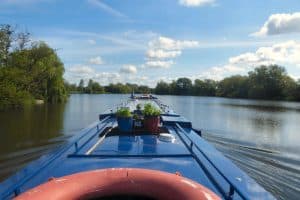 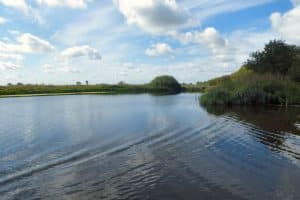 This delightful reminder of Staffordshire’s Tixall Wide is bittersweet since no mooring is permitted here.

East Anglia is a watery landscape – and again, as on Brandon Creek, the river crosses the Cut-off Channel 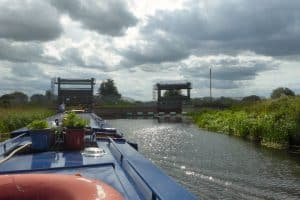 which takes away flood water and feeds it into the sea at King’s Lynn.

the little settlement of Stoke Ferry comes into view. There are a few houses,

and moored boats of varying shapes and sizes.

Did the punt on a tiny slipway indicate the site of the original Stoke ferry crossing…? 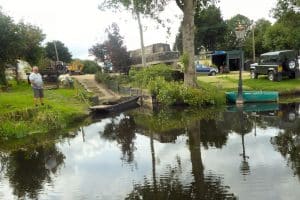 Beside a caravan site (for adults only), is a narrow stretch of GOBA mooring

and just a few hundred yards beyond it is the head of navigation.  Such a pretty river ends in a straight line with a dribble of water through the reeds from the left

and from the right. 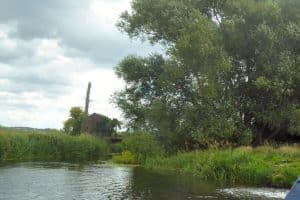 Cleddau was headed back downstream, a pretty route enlivened by sharp bends and dense green clusters of reeds. There were few other boats moving, although a paddle boarder

Despite mooring sites at Stoke Ferry (minimal bank space and a noisy bridge nearby) and at Hilgay (noisy location again) there was a return to the fine GOBA moorings just half a mile from the river’s flow into the Great Ouse.

Wissey verdict: It packs a lot in, does this little river…

Back to the Great Ouse on Saturday,

Next time, some Relief en route to Downham Market…

(Self correction:The cruise on the Little Ouse is the second time into Suffolk, since the Lark,June 2014, also flows within Suffolk.)