Take only pictures, leave only footprints 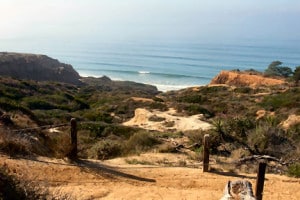 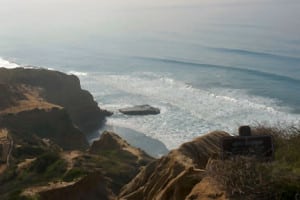 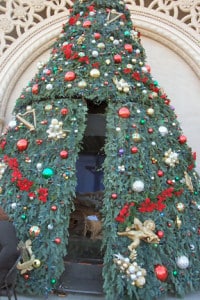 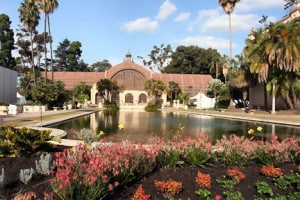 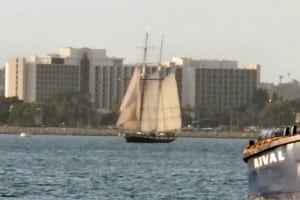 Take only pictures, leave only footprints are the words on notices at Torrey Pines State Natural Reserve. The 2,000 acre reserve is about ten miles north of San Diego and bound on the west by the coast and on the inland north and east by lagoons and marsh areas. Famed as being one of only two places where the Torrey pines grow the area has a diversity of wildflowers, sage scrub and cacti.  The Captain and Boatwif love it! Trails criss-cross the reserve from the lodge visitor centre at about 300 feet elevation, around the slopes, canyons, cliffs and bluffs down to beach level.

Even on a Wednesday morning, initially in a light sea fog, plenty of other people were there: Californian stick women power-walked or jogged past. Fitness fans from the elderly to those in their twenties ran up and down the uneven and often steep paths.  From an overlook (UK: viewpoint) we gazed a long way down at where two freeways meet. Three office buildings stand looking towards lagoon and ocean. Which one is Cal Son’s workplace, we wondered. We started out for Yucca Point, passing twisted pines, ungainly cacti, wind eroded rocks. Far below on the beach a solitary runner splashed through the water, while three surfers floated, watching and waiting for the right sort of wave. Time after time lines of pelicans streamed out to the waves, skimming the crests, as if demonstrating to the surfers how to catch a ride. Waves broke over the square island of rock (Flat Rock). Once before at low tide we had waded out to it. The sandstone cliffs are far from stable, erosion by wind and water wearing away at the sandy bluffs. “My, this has changed,” exclaimed a jogger, as we stood later on about twenty feet above the beach, a sign nearby describing the severe cliff fall of four years ago.

We took the longer route back, crossing a group of earnest Japanese women coming towards us. “Aah, very healthy, look!” exclaimed one, indicating our hiking poles. Up we climbed, the trail twisting and turning. A tiny humming bird sang from a sage bush before darting away. Then out to a perch above more badlands, tall thin ridges of sandstone bereft of vegetation, the rock rippled and indented from the winds. We crept back to the main path, emerging at a corner of the Torrey Pines golf course, home of the US Open a few years ago. How bizarre: here the greens are smooth, evenly green, well-watered. The clunk of club against ball had no appeal – far preferable was the sound of seabirds wheeling, waves crashing on the narrow beach and the haunting blast from the Amtrack trains as they sped below, along the valley, to the city.

It was a good walk, perhaps of about five miles – enough to justify a last stop on Highway 101 at the old railway halt, the Pannikin, for lunch. From there to a supermarket to pick up a stick of bread to fulfil Cal Gal’s request: Grampy’s garlic bread. There huge inflatable turkeys indicated that this is still Holiday Season!

December: “Freddie’s here, he’s come!” shouted Cal Guy Snr. Overnight the Elf on the Shelf had arrived, his job to give a nightly behaviour report to Santa… the first doors were opened on the Advent calendars before school and then it was time for farewells.

Before heading for the airport on Thursday evening we had time for a few more tourist hours in San Diego. First to Balboa Park, a huge area, home to seventeen museums, theatres, the zoo, the naval hospital, miles of trails, gardens  – and the largest outdoor organ in the world. It was obvious that preparations were in hand for some event – but what? Over the course of about four hours we heard much about “December Nights”, a two day festival of food, drink, performance, entertainment… 300,000 people attended last year. We walked up from the car park, pausing to marvel at a most enormous Christmas tree structure on the stage of the Spreckels Organ Pavilion. “Would you like to see inside it?” enquired a short gentleman in shorts and with a shaggy beard.  He introduced himself as Pastor of the Del Cerro Baptist Church in La Mesa. As he spoke a hidden organist was practising: snatches of well-known carols drifted across the auditorium. Here three public performances will re-enact the Christmas story to thousands of people, aided by a choir of a hundred adults, fifty children and a cast of costumed actors (hence the beard).  The Christmas Story Tree, with its 15,000 lights, slides open on metal runners to reveal the Bethlehem scene. Except for the scale of it all it is what occurs up and down the UK. But political correctness in the US has marginalised the “Christmas” word in public, and not to everyone’s agreement. During a long wander around the colourful Spanish Village of Art Studios several artists complained about this aspect of government regulation. Then, after lunch at the Japanese Teahouse, it was back to the car for the last port of call.

Down to Seaport Village, a collection of tourist trap shops designed to suggest a waterside village of the 1800s. Boats galore nestled alongside the waterfront, overlooked by the stylish hotels which surround the International Convention Center. Across the harbour are anchored the US naval carriers. A police harbour patrol boat buzzed past towards the iconic Coronado Bridge. A brigg under sail approached. An open motor launch cruised past, on the bow two folk coaxing a porpoise to surface by feeding it fish. The afternoon drew on and the sun dipped fast.

Sixteen days earlier in an aircraft we had chased the sunset to San Diego; now, many pictures and footsteps later, within hours of take-off we watched a glowing pink globe slide down into the Pacific, signalling the end of another wonderful Southern California visit.