Any readers of the previous post who got to the end may (or may not!) be awaiting report of a Monkton Moment*.  From the overnight mooring just back from the children’s park in Middlewich Cleddau cruised the few hundred yards / metres to Big Lock. This lock is well-named as it is wide enough for two narrow boats side by side or for a wide beam boat… A boat ahead spotted Cleddau’s approach and waited to share the lock.     Down the boats went, while the Captain made conversation with an Austrian hire boater waiting to transit through the lock. 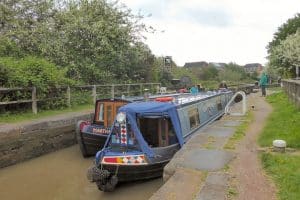 Within easy walking distance from the bottom of the lock is a tap; working on the principle of ‘top up the tank while you can’ the boat was tied up and the hose stretched between the tap and the water inlet point on the bow deck. It wasn’t an easy fill: heavy rain descended, a surge of water as two more boats came down the lock dislodged the hose, the water pressure was so slow and silent that no-one heard the water spill over onto the deck once the tank was full… A conversation meanwhile had been struck up with a second boater waiting to use the tap. White roses for Yorkshire were referred to (see previous post…!) but then the Cleddau name rang a bell. “A river! I know that name…” Very soon, via reference to Camrose and Haverfordwest, residence for some years in Park Street, Pembroke Dock had been declared.  A local gardening business featured too – Sleuths, that’s all the info there is during a fairly good first (only??) Monkton Moment* of the season… 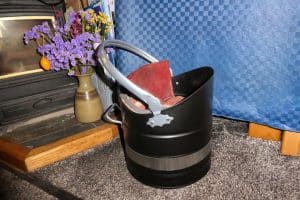 By Friday afternoon the fire lighters had been recovered from the front step, the table moved back to the port side of the boat and the fire lit… 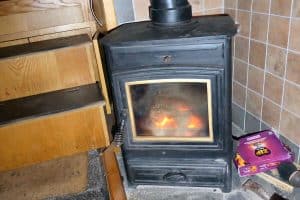 By midday Cleddau was under way, chugging along on the northern Trent and Mersey. Despite the rain distance needed to be covered. Those who know the Captain well will recognise that when not on the boat he pores over waterway routes, planning for distance, locks, rest days, detours, emergencies and tides… “A plan is a figment of the imagination,” the Captain has often claimed. “There is no guarantee it will withstand contact with the enemy / customer / reality…”  An email from Jennie of nb Tentatrice had come as a surprise: “I am sure you have seen the notice about the closure of B20 on LL which presumably will affect your trip to Liverpool?”

Investigation has revealed that the Coxhead Swing Bridge (about 9 cruising hours from the Liverpool moorings) has been badly vandalised and that passage through it is only possible at midday on Mondays and Fridays. The Plan was to pass through this bridge on Sunday 5th May so as to make the Monday 6th May booking in Liverpool’s Salthouse Dock. There was discussion (abandon the Liverpool trip?), there was a phone call to Canal and River Trust (can boats now access the docks on a Tuesday? The answer remains no). So the cruise will continue, the first destination the same, the crew attempting to reach the critical bridge by Friday 3rd, after which there will be a couple of thumb-twiddling days until further onward progress can be made…

Back to the travelling: Not far out of Middlewich there is a single boat width aqueduct over the river Dane.

It replaces a wider one that was destroyed by flooding in the thirties– now wide beam boats from the Manchester direction cannot reach the town. Reeds that intrude into the channel 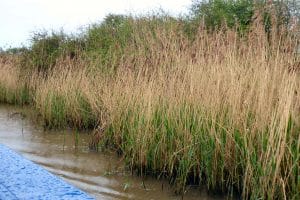 and flashes (wide expanses of shallow water created from subsidence from the salt mining industry) characterise the canal for the next five miles or so. 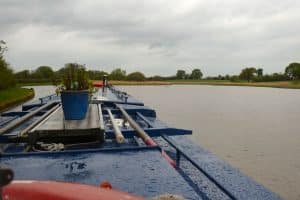 Then at Wincham the chemical works make the going less attractive.  In heavy rain the Lion Salt Works was passed

On past Anderton Marina, the clematis a glorious sight. 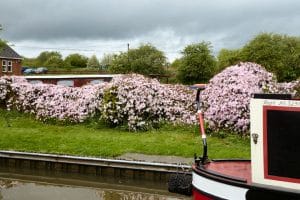 There are pretty properties, some curves in the canal and then the magnificent Anderton Lift that conveys boats 50 feet between canal level and the River Weaver below. 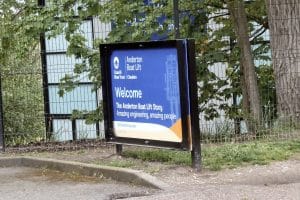 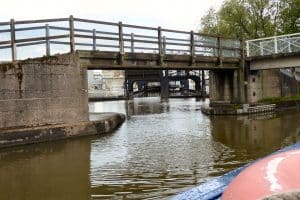 Onward, the canal perched above the river, the air heavy with the aroma of wild garlic. 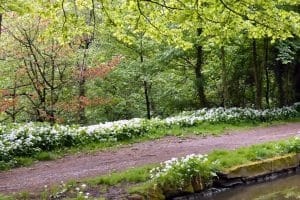 A tight twist brings the canal to Barnton Tunnel, tunnel number one of three.  A boater in front checked that the way ahead was clear and plunged into the gloom. The tunnel light was switched on – and Cleddau followed. 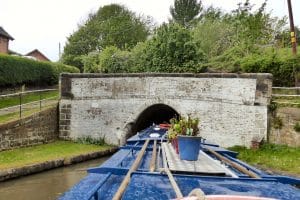 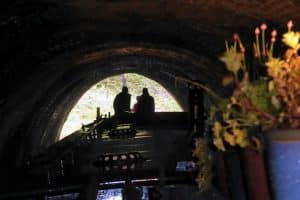 One down, two to go.

Half a mile further is Saltersford Tunnel. Here, coming from the south, the tunnel can be entered only during a 20 minute period after the hour. 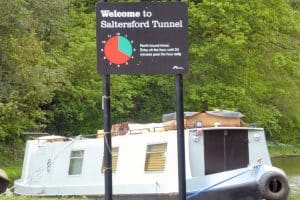 On, under glowering cloud layers, 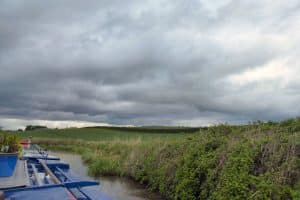 and a once familiar boat, 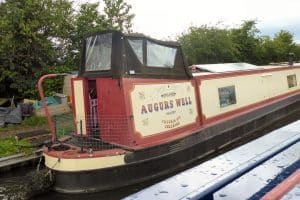 on to overlook Dutton Lock and Dutton viaduct down below on the River Weaver. 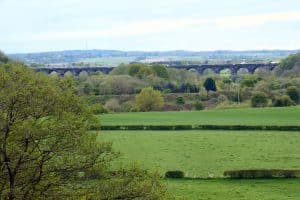 Here, moored at the site of the canal’s collapse in 2012, 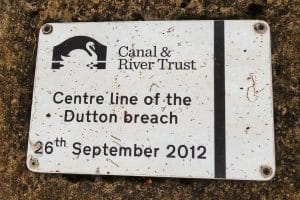 Cleddau had one more night left on the Trent and Mersey Canal – and one more tunnel still to do. 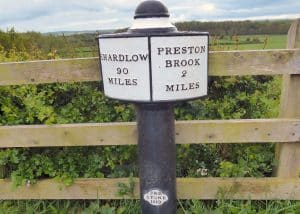 Storm Hannah arrived wildly early on Saturday morning – whether to stay put in a very exposed spot or try to move on…?

As the Captain struggled to untie the boat in high winds three others passed by, three others ahead with another timed entrance tunnel ahead.

Just yards before Preston Brook Tunnel is a shallow stop lock. The crew of a hire boat seemed to be struggling. “Morning – though it’s not a very good one!” Boatwif commented, as rain lashed down.

“We’re new to this,” said a thoroughly drenched chap who was clutching a windlass. Progress through the lock was exceptionally slow and crew pick up was chaotic as the wind whipped across the water… 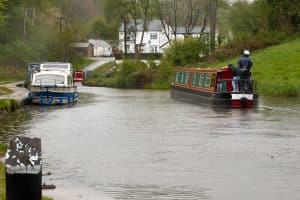 Too late, it was too late for Cleddau to pass through the lock and into the tunnel in the allotted ten minute slot – but it was good to have an early mid-morning cuppa while time passed by, waiting for the next tunnel entry time. 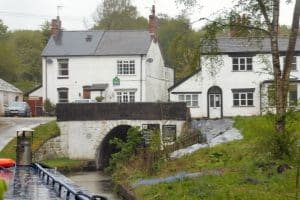 Eventually, in due course, Cleddau and crew emerged from the third and final tunnel. (“Three tunnels, and I didn’t touch the side in any of ‘em,” the Captain later remarked, somewhat smugly…)

Now the wide and deep Bridgewater Canal lay ahead. A Nicholson map in double plastic sleeve was referred to from time to time. Northern names feature – Runcorn, Warrington, Thelwall…

Why on this wildest of days was there a boat approaching, and another, and another? Each boat seemed to be flying a yellow pennant, a large B in its centre. More boats, an entire convoy it seemed, probably twenty in number, all heading in the same southerly direction – a club outing? the Bridgewater Motor Boat Club? (No photos, camera consigned to dry quarters).

At best the rain lashed, at its worst it squalled and bucket-chucked. As protection for himself as well as for the engine, the Captain played his trump card, utilising his very large blue umbrella. It’s a pride and joy, with its carbon fibre struts, engineered and tested in wind tunnels up to 55mph. Did it do the job? For five, maybe ten minutes it did, then whoosh! There were ugly spikes and as the wind continued to gust a totally misshapen creation now needed to be dealt with. Somehow it was shoved below decks – and, miraculously, with some judicious tweaks and a bit of binding thread reinforcement over the struts, it has been restored to working order…

5 miles further on Cleddau found a single mooring space at Lymm, about 90 minutes short of the day’s target.  Waterproof jackets, over-trousers, boots, a scarf, hats and six pairs of gloves all needed to be dried out… Strangely, as the winds and rains continued for the rest of the day no-one begged to get off the boat to go exploring… 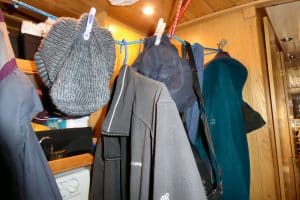 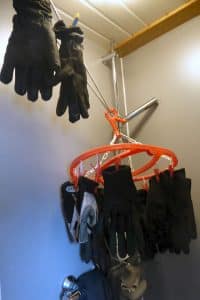 By Sunday morning the weather had improved and it was dry enough to expose a camera to the elements again, even if photos taken had attracted the eye three years ago. 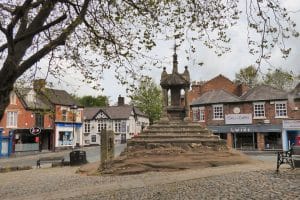 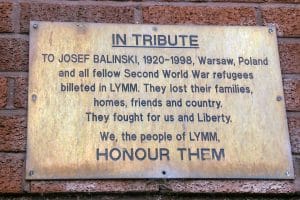 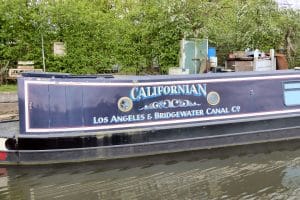 Eventually, half a day late, Cleddau was moored up near Dunham Massey Underbridge, just about 50 metres from the River Bollin Aqueduct. 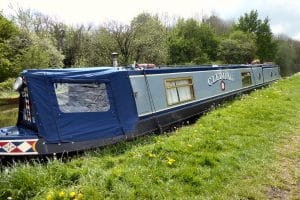 “You’re in Greater Manchester now,” a local walker informed, “not Cheshire,” and added, pointing back at the Bollin Aqueduct, “that’s the boundary.” 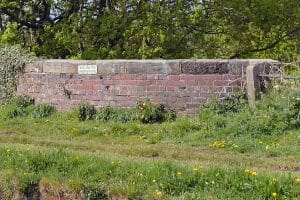 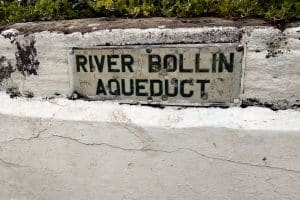 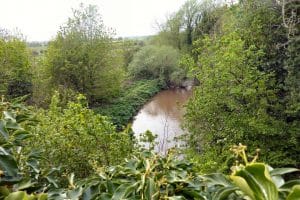 Next time: Bridgewater boating, left at Water’s Meeting and left again at Wigan