But it’s the bits beyond the boating that can make Thames days interesting and different. Take events on Saturday for instance. On the approach to Bell Weir Lock a very low yellow bathtub was spotted in the water and in the bathtub/aka Jacuzzi were several women, the chimney indicating that their tub water was probably heated. (No camera to hand then, this taken later).

an in action pic can be viewed here.  Minutes later the Captain was shouting and pointing “Wedding party! Wedding party!”  Over on the left outside the Runnymede Hotel guests were gathered, engaged in conversation.

Not until the boat entered the lock, however, did Boatwif realise that to the right, up on the lock side, a bride and groom were being photographed…

Within the hour Cleddau was moored again at Runnymede  on a quiet mooring. A succession of conversations ensued. There was the National Trust Ranger who wanted to talk about the Wales Coast Path. There were the three folk who’d “seen boats down London, where d’ya get ‘em from…” And then there were the two little boys who’d never been on a boat and wanted to see one… So, two and a half year old twins Jack and Corby (?) surged through the boat, looking for better viewpoints for ducks and keen to prod instrument lights and throttles.

“Oh, we’ll have to tell Daddy about this,” breathed the mother, before adding “we’re flying back to Hong Kong on Tuesday.” Good luck to her with that…

Early evening a walk across Runnymede meadow was irresistible: still small groups of people were gazing at the Magna Carta Memorial and wandering near the Jurors, the twelve chair artwork.

Sunday was a busy day too on the river. Via a diversion back downstream to Staines for fuel the boat then headed upstream, passing the array of trip boats at the far end of Runnymede,

and progressing in glorious sunlight past Windsor Great Park,

and on to Boveney Lock. It was early afternoon and ‘the world and his wife’ were out on the water: narrow boats, Dutch barges, wide Thames hire cruisers, smaller cruisers, day boats. Already several boats were positioned in the lock.

was in command. He crossed his arms, a signal for lock closure. “Narrow boat!” he then hollered in Cleddau’s direction. “How long are you?”

“Hang on a moment – I’m thinking,” came back his reply. Directions were issued down to boaters already there – and the boats duly shuffled forward.

“Narrow boat!” His arm pointed to the right hand side. “Get your nose behind the cruiser.” Steadily the boat was inched in. Ropes were put round the appropriate bollard and Cleddau was held off from the fat-bottomed boat in front.

The delay before the lock was operated seemed interminable. Behind more and more boats were being packed in. The lock full made a total of eight. The boats rose, the gates were opened and the front boats began to head on upstream. But from behind was heard the lock keeper’s authoritative tone. “You give it up to me now or you stop at the first mooring over there, get it off the boat and cook it there. It’s your choice, that’s the only choice…”

The Captain from the stern had witnessed the idiocy: on the back seat of a tiny day boat was a little disposal BBQ – lit and with food cooking on it! What potential danger there was in putting flame and fuel in such close proximity? Loss of hire boat deposit charge seemed highly likely…

On such a busy day you need both guile and patience to get a mooring. Mathematical skill (“I knew I could do it if I could get a third of the boat tied on”) was applied.

Patiently the Cleddau crew sat through the afternoon, the bow attached to a bollard and a stern rope (three ropes tied together actually) arrowed ashore through the undergrowth and attached to a mooring pin. Finally at 5pm the local cruiser in front started his engine and returned upstream to his marina. Cleddau’s mooring ropes were quickly adjusted – and Boatwif was free to explore.

Just forty yards or so further on a gateway leads into this: the Eton College Rowing Centre.

Across the lake is a footbridge between the competition lake and the “warm up channel”. There, attached to the footbridge, are Olympic rings.

So this is where in 2012 Olympic rowing glory was achieved.

Two miles further upstream (on Monday) at Bray Lock there was a closer look at the lock keeper’s control cabinet. Normally green, the ones here are gold,

unveiled by Sir Steve Redgrave himself. The lock keeper described the unveiling event, while apologising for his hoarse voice, sustained after a very busy Sunday…

Destination on Monday was Clivedon, a mile or so beyond Maidenhead .

To moor involved some more tree hugging at bow and stern but no matter!

After a twenty minute stroll along the Thames Path there is a way up, yes UP 172 woodland steps to the Clivedon Estate. The house has been the scene of high society and political scandals throughout its 300 years of existence . 1668 is marked out in flints,

commemorating the duel between the Duke of Buckingham (instigator of the first Clivedon mansion) and Lord Shrewsbury, his mistress’s husband, who later died of his wounds. In the 1960s the Profumo Affair originated here. Now though the House is a 5 star hotel and visitors and families roam around the spacious grounds.

Careering along a woodland path came some noisy young children. “Aarggh,” one blared.

“No! DINOSAURS!” was the swift retort…

Down on the Parterre in front of the House families played and lazed; 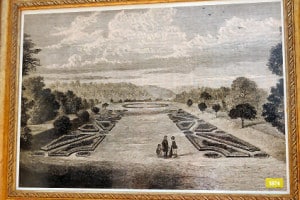 in the Water Garden

older children darted across the rock bridges; in the Rose Garden ‘The Yellow Rose of Texas’ came to mind.

(If you’re interested in song lyrics see here).Those who look up can see the magnificently gilded clock on the (still in use) water tower.

As for titbits, Clivedon was a feast for the eyes, while the constant loop cinema showing in the stable block was an informative and funny feast for the ears. However, if it is feasts for the stomach that you crave see here.

Cleddau is heading downstream slowly now, to be at Teddington on the evening of August 22nd. Finally, a surprise conversation…

Lock keeper: (looking at the front deck) Good array of brushes there. Reminds me of the Dutch Captain who always had a big brush on his ship “to brush the British off the seas…”

Boatwif: Not heard of that. Our brushes used to live on the roof but this year they’ve migrated to this position.

Lock keeper: (continuing) Or yours could be to brush the Plastics out of the way…?

Readers, those were his words!

walking the 185 mile Thames Path, stopped for a chat. She is supported by Rotary International and is raising funds for Polio and Guide Dogs . She lives in Staffordshire and has trained for this walk along the Trent and Mersey and the Caldon Canals.