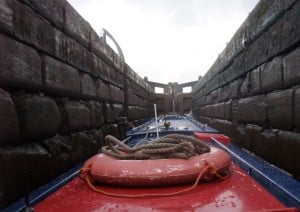 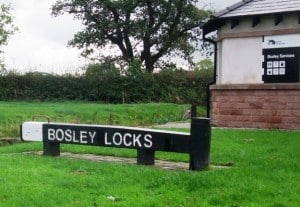 Rain, hail, thunder and winds punctuated the tranquillity of last evening’s mooring.  A check this morning on the weather forecasts for Congleton and for Macclesfield revealed two quite different outcomes: sunny intervals for Macclesfield, heavy showers for Congleton. In the event it seemed at 7am that we were firmly in the heavy showers zone. When after nine the rain began to ease preparations for departure could be made: rain hats, gloves, waterproofs, gaiters.  At 0920 Cleddau glided towards Lock 12, the bottom lock of the Bosley flight.

The Bosley locks are set in glorious scenery, it being easy to revel in it and to enjoy the mile long progress up (or down) the hill. Lock connoisseurs, however, will notice the stone built chambers, the unusual shaping of the lock ladders – and the double top gates.  These double gates require endless additional trips around each lock, especially if the boat being moved has a crew of only two. A boater who operates on his own explained he plans on twenty minutes per lock; the Cleddau crew usually manage it in ten.

Up the boat climbed, aided at Lock 7 when the first down-coming boat was met. In well under two hours the top lock had been reached. There at the top, waiting to come down, was the blue boat Cleddau had followed from Barlaston to Harecastle (the talkative recently retired teacher).  Behind that one were three more boats, including the cheery-looking Sunny Side Up – and the hire boat at the back had asked to queue-jump as “we’re on a schedule”.   Then came a bellow from Cleddau‘s back deck: “THE RUBBISH!” Here is a services area, built for all manner of boaters’ on and off-loading. But Boatwif wasn’t even on the boat to assemble the refuse.

Quite unexpectedly a new face appeared. “Give it to me, I’ll take it for you, I’ve just done mine.” She was serious! So we passed through the top lock without pushing a gate, winding a paddle – or even disposing of our own rubbish.

It’s a twisty, often narrow route towards Macclesfield.  After the two swing bridges there should be no more obstacles, apart of course, from the many narrow bridge holes. There are views of fields, sheep and the hills stretching into Derbyshire. The embankment at Sutton presented an enticing mooring, but with the sun shining (then) a gamble was taken to press on… Drenching showers in Macclesfield! Another at Hurdsfield! A wind-wrecked umbrella. We squeezed out past the back of the Astra Zeneca fencing (pharmaceutical plant) and on towards Kerridge. There was the turnover bridge; there were the little quarry workers’cottages up on the hillside. It had been four and a half months since last we passed this way. Bourne Boatbuilders hove into view, new signs now since Cleddau was entrusted to them just a year ago. There too was nb Kerridge, a boat met all those months ago on the Stratford Canal. (https://boatwif.co.uk/uncategorized/the-stratford-experience-in-three-parts/, see Conversations and coincidences).

On into Bollington, first past Adelphi Mill, then an attempt made to moor on the Bollington Aqueduct. The views were good, the mooring not. On further now, out into the country, past Sugar Lane Bridge. Here, at last, in sunshine, mooring pins were banged into the ground, ropes were tied and Cleddau and her crew could enjoy the quiet snuffles of the ponies grazing opposite, the sight of an occasional canoeist flashing past or the odd duck sallying forth from the bank.

An hour later came a tap on the window: there, outside, grinning like three Cheshire cats, were the Cheshire Three! Techno Son-in-Law in his sandals, the Cheshire One in school uniform, Cheshire Mum in, well, Cheshire Mum not-in-the-office-clothes. “Fishing,” hissed the Cheshire One, brandishing her gap-toothed grin. She scuttled to the front deck, got down to business with the (pink) fishing net, and success, caught two huge beautiful sycamore leaves!

“Now, you do know you’re beside Tibbs’s Farm, don’t you?” asked Techno Son-in-Law, rhetorically, launching into local history pertinent to the old railway line** which runs just west of the canal. Numerous conversations were started – but not finished…. No matter, there’ll be time to catch up over the weekend.

Tomorrow – to Poynton, back to the Victoria Pit moorings, about 4 miles further north.