Message to the Cheshire Three: “Fancy a ride on the Anderton Lift? We’re going down onto the Weaver.” There was an instant affirmative – and so on Sunday the Cheshire Three and Techno’s Dad appeared early at Cleddau, bringing delicious home-made cake with them. 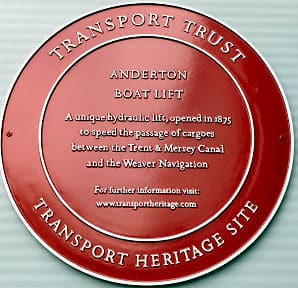 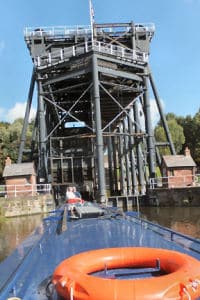 The Lift connects the Trent and Mersey Canal with the Weaver Navigation some fifty feet below. In the 1800s coal, salt, flintstone and pottery were the high value cargoes being transported between Stoke-on-Trent, Northwich, Manchester and Liverpool and transport was by barge.

When an update on the use of two salt slide chutes from canal to river was sought one Edwin Clark, a canal engineer, produced a striking idea. In 1875 he created a structure which used hydraulic rams to counterbalance two boat-carrying iron caissons. 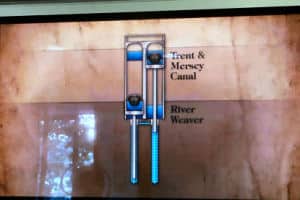 All was well for thirty odd years but  then the corrosion caused by the salty river water affected the rams. The Lift was vital to trade and so a conversion to electricity using massive counter weights and just two 30 watt motors was made. 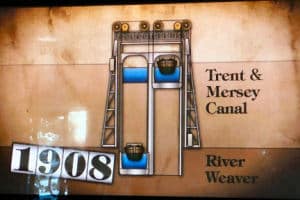 On the Lift worked – in one record-breaking day moving 68 boats.

By 1983 the structure had signs of fatigue and was abandoned as a rusting wreck. Petitions, heritage lottery awards and partnership funding brought it back into action in 2002. Once again it was operated hydraulically, with non-corrosive oil filling the rams this time…

So what is it like to go down in the Lift? From the holding mooring the lift operator directs the boat into the basin 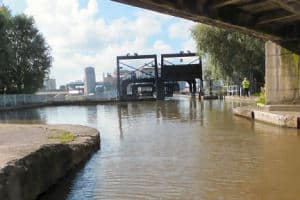 and then onto the aqueduct which connects the canal level to the lift. 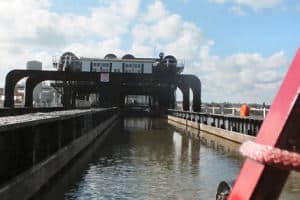 Gates at each end of the aqueduct adjust the water levels and then at the operator’s signal the boat (or both if there are two) proceeds on under the old  cabin used by the lift operator and into the structure.

Views from fifty feet up: the marquee in the Anderton grounds 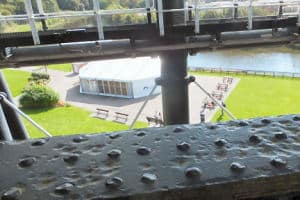 and the trip boat below being readied to ascend.

From the caisson the view forward is of a huge factory site,

9 cameras link the upper deck activity to the control room. 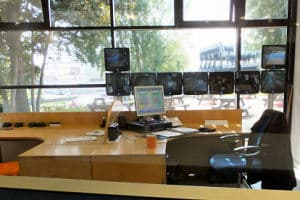 There’s a tiny judder when the caisson starts moving and then a slow glide downwards at 9 feet per minute. Halfway down the upcoming caisson passes

and there’s time for a quick exchange with the boat master on the Edwin Clark trip boat. The descent takes about eight minutes and then there is an age, it seems, while the caisson and river water levels equalise.  Slowly the caisson gate rises and the boat floats out under a curtain of river water drips!

Visitors from far and wide travel to visit the Anderton Boat Lift. The site has an excellent visitor centre, stashed full of accessible information and a cafe, of course. The grounds stretch down to the river and a maze created from the redundant counterweights provides a novel playing space.

Did the additional crew enjoy the trip? Apparently so. The Cheshire One appeared to expect a sort of water flume experience; to her surprise and relief the ride was smooth and safe! 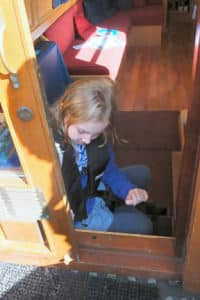 Downstream on the Weaver, between Anderton and the first locks what do you see? Partly derelict industry, 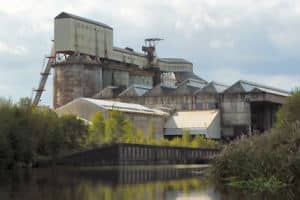 a kingfisher, several herons and the very  tree

to which Cleddau had been tied during involuntary immobilisation last time down here.

What did the youngest crew member do on this short river trip? Steer, of course, 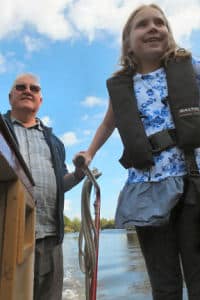 as well as listen to music and play a game of dominoes. 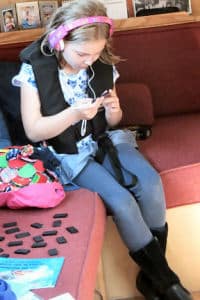 Back at Anderton on Tuesday the Captain and Boatwif reported for a Top of the World Tour, one not for the faint-hearted.

Kitted up with hi-vis waistcoats, radio receivers and earpieces the tour started in the exhibition area before going out onto the Lift. There were close ups of the caissons (made in Stockport, still in use 140 years on),

with the trip boat at the bottom.

Notice the dry bed the caisson lands on and the hydraulic ram (the black stainless steel and ceramic pole) which goes about 60 feet down into the ground.

Inside the old control cabin the operating handles for the gates and the electric motors are still in position.

Higher up still, right on the top of the structure, it was close-up time with the gear wheels, part of the 1908 refurbishment but now redundant.

Boaters, walkers, families, history buffs, engineers – what’s more to be said – other than that if you’re in the north west this is a fantastic, free to enter site to explore and enjoy.