The big, the bizarre and the beautiful

Within a couple of hours of leaving the Calf’s Heath mooring on Saturday the Shropshire Union Canal had been reached. 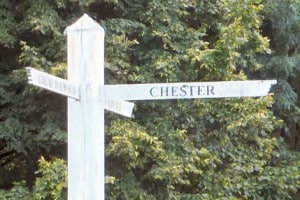 that must be it… pass through the small stop lock (a 6 inch drop) at Autherley Junction and the Shropshire Union stretches ahead for 66½ miles to Ellesmere Port and the Manchester Ship Canal.

After the curves and narrows of the Staffs and Worcs Canal boaters soon realise that cruising along the Shropshire Union (which is still running through Staffordshire at that point) is a rather different experience. The Shroppie is initially wider, but later there are very narrow sections and unlike many other waterways it is arrow straight for long stretches. The channel often passes through deep cuttings, their rocky sides sometimes visible. Trees have grown up alongside the banks of the cuttings so the water is shaded – and the towpath muddy. Another renowned feature of this southerly section of the canal is the embankments, again long and straight. During construction the spoil from the cuttings was used to create the embankments (a Thomas Telford design).

So it’s the width, the straights, the depths of the cuttings and the height of the bridges

that are “big” around here.

Twice in recent days there’s been passage under the M54

(another Thomas Telford design) high above Watling Street (the A5 London-Holyhead route).

The ironwork is attractive – but it’s crying out for a paint restoration job; just think how attractive the Ramsdell Railings on the Macclesfield Canal look after years of effort by that canal’s Society.

There are big views in some places, across the fields from the embankments and, gloriously, west towards the Wrekin and even to the hills of mid-Wales. 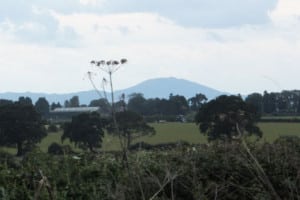 As for the bizarre: well there are unusual boat decorations: here the model dog on the boat’s bow was identical to the live dog on the towpath! 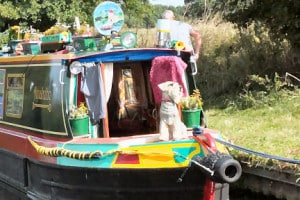 A bird of prey on another boat seemed rather intimidating

– but what about this (skull and crossbones)

or this (shark’s teeth)?

Boaters, like road users, are conscious of fuel costs. Famed is the garage in Wheaton Aston, which has a wharf on the canal below and supplies diesel at this price. 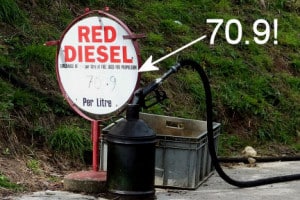 How come the price of marine diesel varies so much…?

In Brewood there is this building, 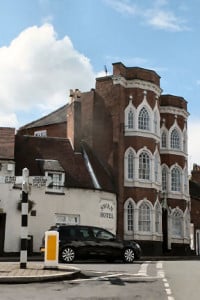 A couple of boat names have brought a smile: Life on Mars 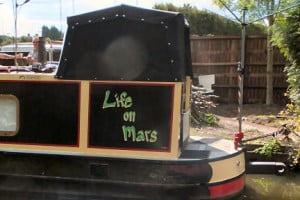 and Summat in the Waerter (think of a West Midlands accent).

Bizarre too and famous along the Shropshire Union (Grub Street Cutting to be precise) is Bridge 41 where a short telegraph pole remains planted on the central bridge support. 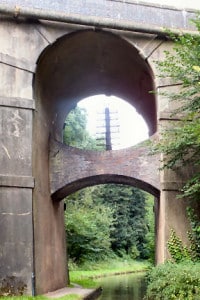 Beautiful : Wildlife is abundant on the canals. Herons are regularly seen hunched in a field over on the bank side. This was a chance shot of one in flight 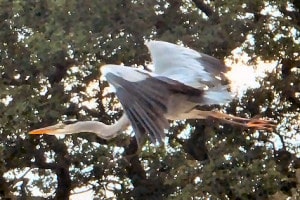 while sunlight dancing on water by leeching through the leaves overhead is a cheering sight.

Beautiful is the bride. On Saturday afternoon, while the Captain struggled with the impossible task of mooring in shallow water by the meadow below Brewood, 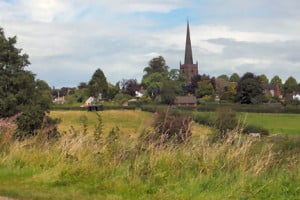 church bells rang out. Later they rang again and a bride and a whole posse of belles emerged from the church. 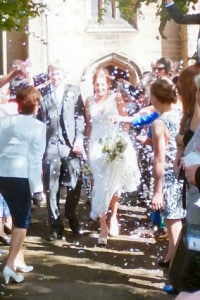 A very severe rainstorm an hour earlier had left a large, deep puddle beside the churchyard gate; a succession of beautiful high-heeled summer wedding shoes had to be tiptoed over the unplanned pond…

This was a beautiful boat, nb Britannia (near Coven Heath, Staffs & Worcs) 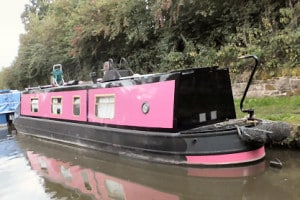 Finally, a beautiful gesture: help yourself to apples.

(Written at Goldstone Wharf, awaiting arrival of additional crew, the Cheshire One having been recruited to help with a fair few locks down to Audlem).