The familiar and the surprising…

Cleddau has cruised “home” northbound along the Macclesfield Canal, a very familiar route.

High above Scholar Green (love that name!) is the ragged shape of the Mow Cop folly; 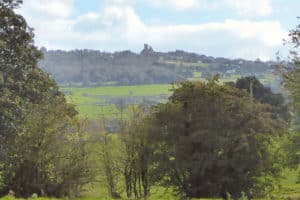 while across the fields from Ramsdell Hall

is Little Moreton Hall. Who would be weary of seeing again this charming crooked structure?

Tied up beside the Ramsdell Hall Railings

on Thursday temptation grew. It was a dry day, the winds had dropped, and tantalisingly Little Moreton Hall was just three fields away.  A walk, and a National Trust cup of coffee, had a magnetic attraction… There was a trouble-free stroll: the paths were dry, the mud non-existent, the cowpats few and the cows docile. 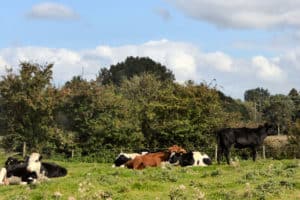 At the ticket office entry tickets were obtained and a flyer was offered.  Autumn Lights is a temporary art installation inside various rooms of Little Moreton Hall. 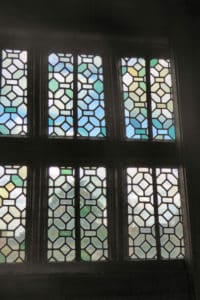 and created screens of plain and mirrored acrylic to reflect and deflect the natural daylight that falls through the windows. 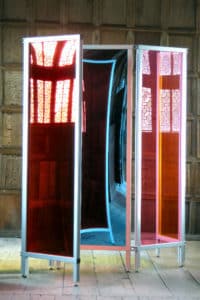 Onward then for an hour or so to moor at another favourite spot, on the Biddulph Line Aqueduct, just outside Congleton. It seemed too late on an evening walk to venture down onto the Biddulph Valley Way so Boatwif crept upwards from the towpath at the first bridge ahead.

“Horse fields,” Techno Son-in-Law would have said.  There is a livery, eight horses stabled here, one swathed in a garish horse blanket. 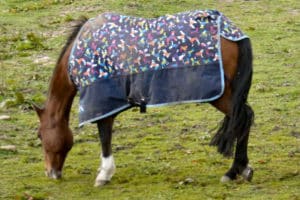 Just the other side of the bridge is this attractive house.

If only it were smaller, its shapes, colours and textures seeming to invite the passerby to reach out and stroke and touch those different surfaces…

The next morning, down on the Biddulph Valley Way,  came a most unexpected sighting. This one-time railway line is now a popular route for walkers, runners, cyclists and horse riders. On Friday it was deserted; just one runner in the first mile. Then ahead a man appeared, walking his three dogs. One of the dogs seemed to chase a ball of white fluff into the undergrowth. The dogs were quickly put on leads but still the fluff ball was on the move…

Closer up you could see it was more floating boom-shaped than ball.

The dogs were curious. “Two of these are trained rat catchers,” muttered the dog walker, as one of the lurchers (?) strained at the lead.

The thing (first guess, a stoat) wriggled up to the path level. It showed no fear of the dogs or of the humans. Endearingly it scurried towards the Captain’s foot; it clung to his shoe,

clambered his leg. How swiftly then the initial attraction faded… Shaking his leg hard the Captain strode away. Conclusion: someone’s pet snow white ferret was playing away from home. Would it be able to catch prey to eat? Would the ferret become prey for other wildlife…? (Joe Grundy – your expertise was needed!) Outcome – unknown.

Later, after checking out the Congleton bear

(for clarification** see reference below the stats) the boat was moved the remaining 3 miles from Biddulph Aqueduct to Dane Aqueduct, along the canal below the brooding Cloud, past cows, both real 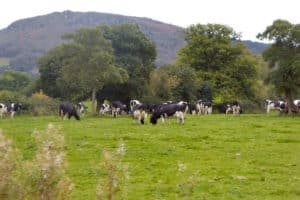 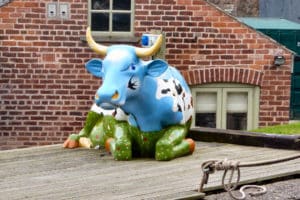 There’s a long stretch of mooring space at the bottom of Bosley Locks, enough for a dozen boats or more. It’s usually blissfully quiet, remote from town or road – but on Friday it was noisy. A hammering came from across the canal to the east, while diggers were hard at work excavating a site across the way below the Cloud. 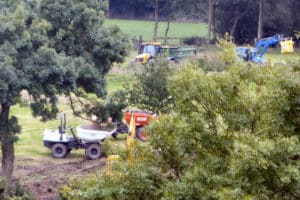 Further up, where the A54 Congleton – Bosley road crosses below Lock 5, Friday afternoon rush hour traffic hummed and buzzed.

It’s Autumn, Season not yet of mists but of mushrooms… Further up the flight from the traffic sound were these,

spotted on the towpath near Lock 2.

Up Bosley Locks on Saturday morning.

These locks are a pleasure… yes, the paddles on the bottom gates are horribly stiff, yes, it’s a pain having four gates to close as opposed to the usual three, but the locks behave well, the boat doesn’t suffer the turbulence common on the Heartbreak Hill locks – and the views are magnificent.

As the boat rose in the locks over to the right a familiar landmark hove into view. 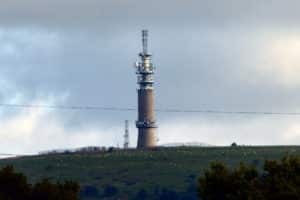 Aah, memories. Eight years or so ago, well over a hundred miles into a car journey to Macclesfield to deliver the toddler Cheshire One back to her parents, she had shouted out: “”Makersfied, Makersfied,  Microwave tower – MY microwave tower…!” Now, whether driving or boating, when you see it you know you’re reaching the home stretch…

The Top Lock area was busy.

There was an offer of help; a man clambered across the gates (not the footbridge) determined to wind a gate paddle. “Went down the locks at four o’clock this morning,” he confided. “Helping a mate out, he’d sold his boat and had to get it to Wales. Plastic boat it was…” So confident was he in his tale that he repeated the whole thing to the Captain a few minutes later as the boat was brought into the final lock chamber of the year.

After eight years this watery road is very familiar now: the locks, the aqueducts, the swing bridges (even if Broadhurst required additional tools to open it on Saturday)

-they all hold their charm. In early summer the lengthy repair of Bollington Leak gave cause for concern. More recently there had been C&RT notification of a leak investigation nearer Macclesfield. Here seems to be the site, fresh puddling clay reinforcing the bank. 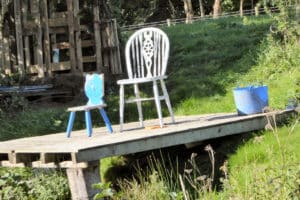 hinted that Father Bear and Baby Bear might have abandoned their fishing and gone home for tea…!

However familiar the route is you never know who you’ll meet or what you’ll talk about… Just a few days earlier at the Ramsdell Railings there had been lively conversation with Martin and Margaret on nb Erin Mae.  At Congleton Cleddau and Erin Mae briefly crossed again, Erin Mae heading south to home moorings, Cleddau heading north…

When on the move there are snatches of conversation between back deck crew and towpath walkers. On Sunday there were several variations of the “You’ve got a good day for it” remark. Then a couple sought advice about how far to walk to the nearest pub or cafe (The Miners Arms at Adlington, Bridge 18, was the considered reply to that). There was a plea for help from the towpath at the Deeps, the Captain mounting a difficult and daring rescue of an angler’s favourite float… 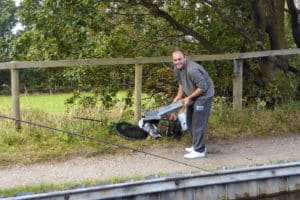 But the throwaway remark from the towpath about a steam boat made no sense at all – until it was seen… one small boat, carrying four folk, steam billowing from its tall funnel. 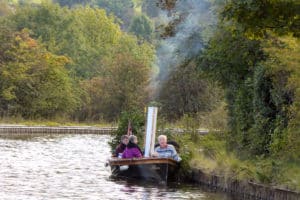 Sunday seemed a day for unexpected craft: apart from the steam boat there was a paddle boarder at Clarence Mill

and a small flotilla of canoes preparing to get ashore at The Trading Post.

Since departure from Higher Poynton on August 24th the crew can recall just two really wet days (and a fair number of blowy ones). As Cleddau arrived at her mooring pontoon on Sunday afternoon a sharp cold shower broke the run of dry and often sunny days.

Found on board: the complete set of boat keys (in a fleece jacket pocket); the emergency first aid kit

Missing, presumed stored in either a Cheshire or a Bedfordshire garage: 1 ash can

(**From Wikipedia) Congleton became notorious in the 1620s when bear-baiting, as well as cockfighting, were popular sports.[3] The town was unable to attract large crowds to its bear-baiting contests and lacked the money to pay for a new, more aggressive bear. The town used money it had saved to buy a bible and it replenished the fund with the income from the increased number of spectators. It became legend that Congleton sold its bible to pay for a new bear. The chorus of 20th-century folk song “Congleton Bear”,[6] by folk artist John Tams,[7] runs:

Sold the Bible to buy a bear.