Just two days’ cruising lay ahead when Cleddau pulled away from Biddulph Aqueduct on Tuesday morning. To Bosley Locks would be a non-stop run of about 90 minutes. The Cloud, that steep lump of a hill just outside Congleton, was a silhouette in the morning haze. 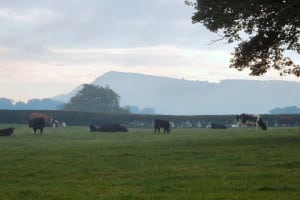 The painted resting cow was a signal 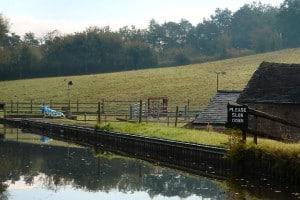 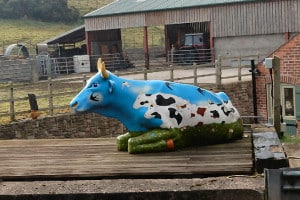 that the locks were not much further ahead.

Over the River Dane, then Bosley Bottom Lock was in sight.

Water trickled from between the gates indicating that the lock needed emptying before it could be accessed. With 12 locks ahead – prepare for a workout!

Since first mooring on the Macclesfield Canal (April 2008) this lovely flight of locks have been tackled many times, mostly as a crew of two but sometimes with added family assistance. An hour and 50 minutes seems a good average transit time. To take therefore 3 hours and 13 minutes indicates that Tuesday’s trip was slow – very slow…

Just out of lock 12 (the numbers run 1 at the top to 12 at the bottom) was another boat, its helmswoman sighing visibly. “It’s going to be slow,” she said. “There’s a hire boat ahead, they don’t know what they’re doing.”

Speed improved marginally once the novice lock hand had learned which paddles to wind… Cranking up a gate paddle only a couple of inches, however, does not release water fast! 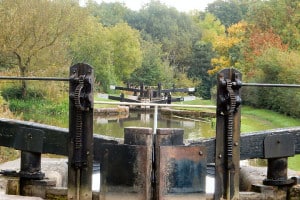 There was time to admire the patterning on the gritstone blocks inside the lock chambers. 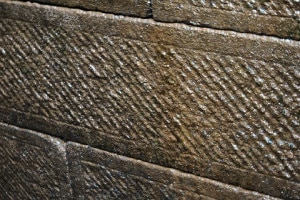 There was time to watch as visibility around The Cloud improved. 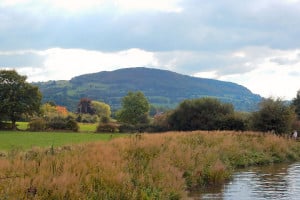 Then, about four locks from the top, there was a long pause. The pound (stretch of level water between two locks) had become very shallow. The Captain closed the upper gate paddles to prevent further drain down of water. Cleddau (like in his time the Grand Old Duke of York) was neither up nor down. It was a case of too little, too late. The boat ahead ran aground.  However much its helmsman tried his boat was stuck, on the offside, bow and stern in the reeds. A barge pole was brandished, used.

A lock full of water was let down from above. Gradually the stuck boat was worked loose, able at last to enter the lock.

Twice there was more time spent waiting, waiting for boats coming down to leave the lock ahead. 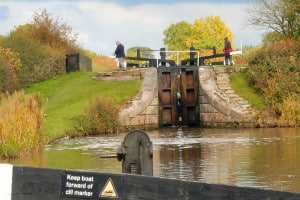 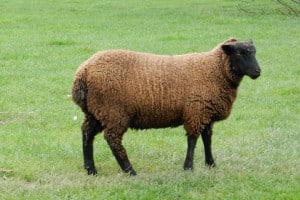 and cows, through wooded cuttings and two swing bridges.

The canal approaches Macclesfield, near Sutton now, where the jagged tops ahead are a mark of a quarrying past. 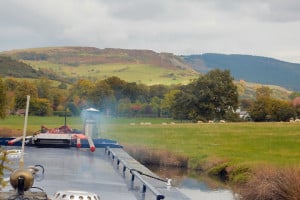 Moored overnight on Gurnett Aqueduct a thought occurred to the Captain. “Last day tomorrow. We haven’t eaten out at all recently, how about breakfast at the Garden Centre?” So, after another coat of bilge paint inside the deck locker,

on Wednesday was served at Fairways just behind the hedge

(reached via a flight of steps off the aqueduct and a short walk).

There was just the last three hours or so to go, past ferns 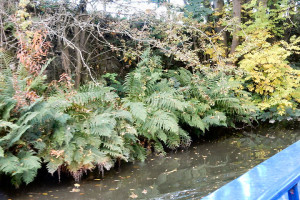 (are they as prolific or as huge on other waterways) and mills. Regular readers, these mills have often been photographed. Can you correctly name one or more passed on Wednesday morning? (Answers below) 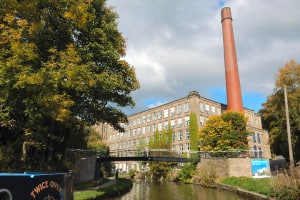 hills to the east, a heron concentrating on its next meal… 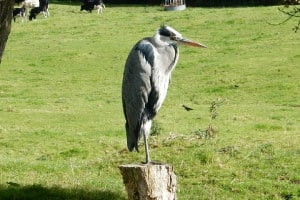 The canal winds on, creeping through bridge holes, 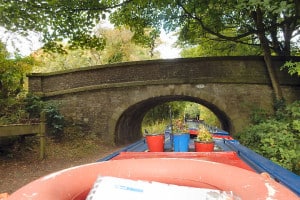 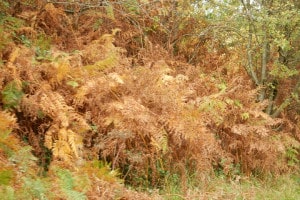 Nearly there – an angular shape loomed into view, first view of the pylon line 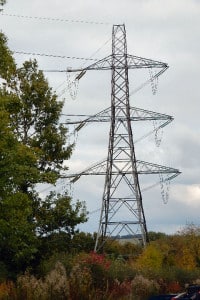 that heads towards Stockport. Then there was unexpected blue-jerseyed activity by the towpath. 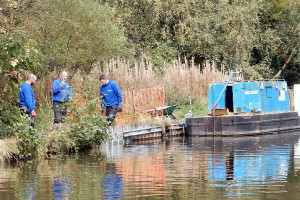 Nearly there – the bridges have flat platforms now, 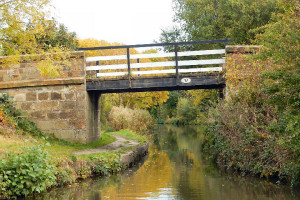 because of subsidence from past mining activity.

(the stretch ironically called the Deeps by some boaters…)

Nearly there – last stop of the year, a fuel fill up at Bailey’s Trading Post  where in sunshine or rain gongoozlers sit outside to watch and chat…

Two hundred yards to go and Cleddau was back!

Undramatically, unhindered by rain or gale, Cleddau slipped quietly back on her moorings 145 days since leaving in May to go 518 feet down to the sea – and back! 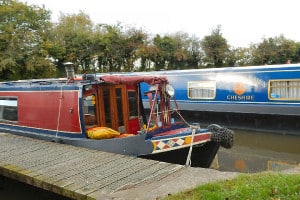 Within the hour an email from Iain, who runs the moorings, pinged onto the laptop. “Welcome back!” it said…

It’s been a fine cruise, a mix of the familiar and of the new. To pass under rather than over the Severn Bridge and the Severn Crossing was thrilling, as was the breathtaking view of the Clifton Suspension Bridge. To cruise under the 25 bridges on the Tidal Thames between Limehouse and Brentford was a wonderful experience, exhilarating and nerve-wracking in equal measure! There were low points (alternator trouble, diesel bug and mooring difficulties on the K & A) but it is the high points (visits by nieces and a great-niece, the glories of Runnymede and Clivedon, the totally unanticipated buzz of mooring in Bristol Floating Harbour and at Limehouse) that will be remembered far beyond the dark winter months.

As for next year – Liverpool maybe…?