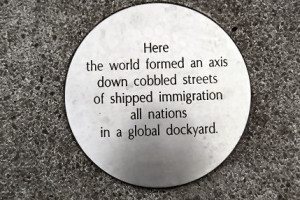 There can be no other title but the above, even though the day was in two quite distinct parts.

Part 1: Prompt at 9am Techno’s Dad waved from the towpath opposite the Piccadilly Village overnight mooring: Cleddau’s extra crew member had turned up again for another gruelling boating session. The Rochdale Nine (locks numbered 84 to 92) form the southern end of a canal from Rochdale. Boaters speak with pursed lips about the Rochdale Nine, their language sprinkled with confusing words like “underground” and “chains” and “waterfalls”…

Techno’s Dad, who knows these parts, had done his homework: just navigating from Piccadilly seemed confusing enough, so take a sharp left, a right under a building and an old bridge and then a sharp left. There was the first lock. A current of water made drawing alongside the tow path tricky: what was to come was worse. Anti-vandal keys were dealt out to each crew member as surely these would be needed. Just ahead the lock was full, at the right level – all that was needed was to push open the gates. Yet such a simple starting point was unachievable! A fierce flow of water tipped over the back gate and the gate could not be budged by one – or even by two people. Lateral thinking came into play: use the boat, thread a bow rope round the gate rails, use the reverse thrust of the engine to pull it open! The bow rope was attached to the gate, the engine set in reverse – and eventually the gate was snatched open. Cleddau proceeded forward. What to do next? Slowly the water level was lowered, one gate paddle proving particularly stubborn… Relief! Done. One down, eight to go.

Boatwif proceeded down the tow path – straight into the dark bowels of a building. The “tow path” was a walkway over the water, concrete pillars either side, a sort of dark underground car park, now with a boat floating through it. In the darkness was a lock. Same problem, no chance of opening a top gate. Again the bow rope was attached to the gate, the helmsman prepared to apply reverse thrust.

From behind, from the gloom, came a polite voice: “Can we help?” And thus, with the help of two extra crew, the next four locks were worked. Ghisla and her father Wolfhart, had flown into Manchester last night from Germany for a three day weekend in the city – and were out exploring! They pushed and pulled gates, they wound paddles, they drank tea, they inspected the boat as all (now five) crew members and Cleddau made their way down into Manchester. The fierce “waterfalls” over the top gates remained a feature. Tow path access was often non-existent so Techno’s Dad displayed courageous balancing skills across the gates. Chains attached to pulleys needed to be wound to open lower gates… On Cleddau went, soon passing below Canal Street, the Gay Village centre.

After about four locks Ghisla and Wolfhart left: after all, their mission had been to track Engels’ and Marx’s 1840’s findings about factory conditions in Manchester.

The buildings took on a newer appearance; three times smartly painted duck houses were spotted.  Towards Castlefield Junction the canal creeps between high sides: old buildings on one, railway embankments on the other. Trains passed on one level, trams on a higher one. Cafes are squeezed into tight corners; two bird boxes, somehow, are attached under the railway arches. The final lock was reached, below it the Rochdale and the Bridgewater Canals meet. Another battle with gates, double windlasses deployed and then the boat was free, free to moor up in the basin, free of locks for many miles!

Part 2: “The Lowry?” queried Techno’s Dad over lunch. “”What you want is a tram to Media City. But beware the crowds if Manchester United is playing at home…” The Metrolink negotiated, the Captain and Boatwif found their way out to Salford. There, by the water, stands the vast BBC Centre, the new ITV complex (and Coronation Street set) now under construction. Nearby is the Imperial War Museum North and the Lowry. So, against a tide of red and white shirts the Captain and Boatwif made their way to the Lowry, a cultural centre which harbours two theatres and an exhibition of Lowry’s work. Then a stroll beside Salford Quays, a vast inland port constructed in late Victorian times and now redeveloped as a heritage and leisure facility. Embedded in the footpath are plaques providing facts and messages which stimulate a sense of Salford’s past. Occasionally from Trafford Park across the water came waves of cheers as Man United fans celebrated their 4-0 win against Wigan Athletic.

A tram ride back (“See, that’s the Manchester Ship Canal,”), a lucky find of a well-stocked local grocery shop – and a pub meal just across the other side of the canal. At 10.30pm on a Saturday night blue lights enhance the few trees around, security cameras provide surveillance  – and the discos and bars at street level above are at full blast.

At some point tomorrow Cleddau will begin to wend her way west, towards Lymm, towards rural Cheshire, away from the towers and canyons of a modern city with a proud industrial past.

Bruise report: no photos exist or will exist as record of the Captain’s ribs (clearing weed hatch of rubbish on Friday) or of Boatwif’s buttocks (a lock side slide on Saturday) .