The Rock Houses of Kinver 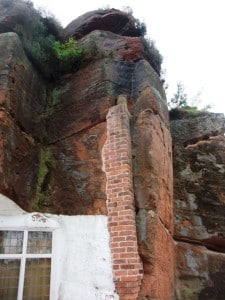 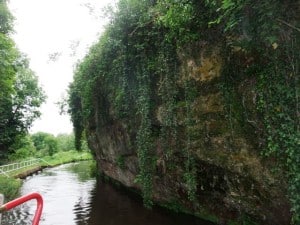 “We must be in Worcestershire now,” Boatwif announced early afternoon to the Captain.

“So? Do they drive on a different side of the road?” replied the Captain, to which there wasn’t really a suitable reponse.

But counties matter to some folk.  Brought up with a fiendishly difficult Counties of England and Wales jigsaw in which Yorkshire and Lincolnshire were easy to position but poor old Middlesex never got placed Boatwif finds a sort of security in knowing which county she is in. Cleddau started her 2011 cruise in (quite long) Cheshire and has been making her watery way through (very long, according to the map) Staffordshire for well over a week now. At Gailey, several days ago, a free tourist map of that county (2009-2010!) jumped into Boatwif’s hands and it was on that map very late last night that (in red letters) Rock Houses at Kinver was spotted.

A change from wet towpaths and lock gear was needed so off we set to find the Rock Houses. It was about a half hour walk up onto the sandstone Kinver Ridge (note the key word in that sentence: up!) The structures are now in the hands of the National Trust, the dwellings open to visitors only between Thursdays and Sundays. However, our arrival coincided with that of a geological surveyor who was to meet the NT warden.  Ask a keen man a few questions – and what treasures you will learn. The cottages had been lived in from the 1700s until 1967; census returns reveal that at one point about 90 people had been living there, their trades ranging from workers in the Kinver iron forge to warren keepers. During the 1900s workers from Dudley and Stourbridge would take the light railway out to Kinver to get their lungs filled with fresh air and to see green countryside. From the ridge Dudley can be seen, about 8 miles to the east.  Deprived of access to the cottage interiors (wrong day of the week) nonetheless we were able to snoop into several caves on the upper cliff.

Kinver village comprises a main street, traffic restricted to 20mph, and many houses dug into the steep gradients. The parish is beautifully cared for, all gardens and public areas being perfectly preened and the shops seeming to provide well for its community. If Falklands Friend returns to live in her Kinver house she can expect some Cleddau visitors!

A gentle onward cruise followed, still downhill towards the river.  Just out of Kinver, on a narrow section nb Tight Squeeze came toward us, alarm and panic written in the eyes of its front deck crew. The back cabin was emblazoned with a squeeze box. Does its crew ever music make, one wonders. Another notable boat name was nb Llanarrow. We crawled round bends following the hillside contours, past another pristine holiday park, past red sandstone outcrops, under branches of oak trees, through Cookley Tunnel,  down Depdale Lock, a room cut into the sandstone there right beside the lock, arriving early afternoon at Wolverley.

By late afternoon the Italianate church upon the hill beckoned. Inside are many neoclassical memorials on the walls, a fine East Window, but most striking was the series of 14 pillar-mounted modern paintings.  Bedfordshire readers take note: dated as 1996 they are the work of the Benedictine nuns of Turvey Abbey.

A day then of minor achievements: some fascinating (and free) sight-seeing, some dry weather cruising, some laundry work and some boat polishing;   just one small mystery to solve, why does biting wild insect life choose to forage from Boatwif and never from the Captain?