The Stratford Experience – in Three Parts 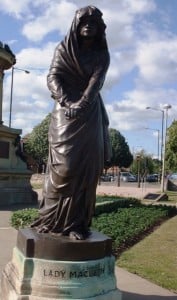 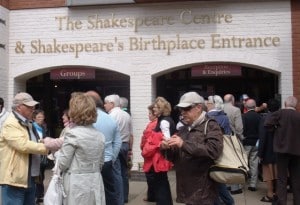 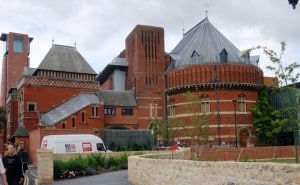 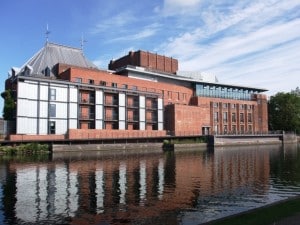 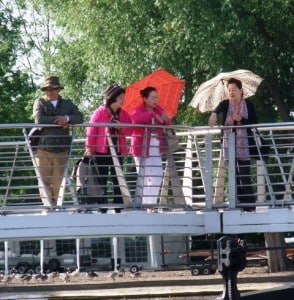 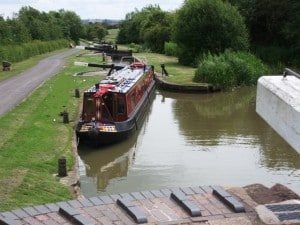 Decades ago, when still not even a school pupil, Boatwif first fell under the spell of speech radio.  At a quarter to two every afternoon, tum te tum, tum te tum, it was time for Listen With Mother. A nursery rhyme came first and then a story, then a closing rhyme.   “Are you sitting comfortably? Then I shall begin,” the clear tones of Daphne Oxenford would enunciate.

This blog could be a long read, so scan quickly – or make that cup of tea, make yourself comfortable, and then begin.

Part One:  Conversations and Coincidences

On a trip such as this conversations are rarely of the profound kind – but often a remark strikes a chord, stirs a memory, even raises a laugh. First coincidence to report comes via Cheshire Daughter. She had mentioned our travels to a Sussex-based colleague; at the time the Sharpness destination had just been reached. The colleague described her family boat, Marjorie, usually moored at Sharpness, but currently at Milford Haven. (see: http://www.flickr.com/photos/[email protected]/5798832025/ )  Furthermore, the colleague’s best friend’s father runs / ran the Southampton School of Navigation.

Next coincidence: seated beside us at Macbeth on Wednesday night was a couple from California, on the Cotswold section of their extensive UK itinerary. Though residents of San Francisco the daughter works in Downtown San Diego, her apartment right beside Balboa Park. (We know it well!)

Then yesterday, Boatwif and the Captain got caught up in a primary school study outing, crossing the road towards the Bancroft Basin. “My wife feels quite at home amongst you,” said the Captain to an escorting adult. “She used to be a teacher.”

“Oh, I’m not a teacher,” was the swift reply, “I’m just the Chair of Governors.”

“Snap!” was the Captain’s quick response. “But in Bedfordshire!”

Last coincidence to regale: Today it had been a hard morning locking up the Stratford Canal (more later).  A horrible, tinny, clattering noise from the propeller impelled Boatwif to draw the boat in to the bank, rather than the open lock ahead. Back to the boat came the Captain. Not for a while has he been flat on the back deck, hands groping around the propeller.  While he was retrieving a plastic bag, a nylon shopper and a piece of metal, boaters coming down the canal enquired about the state of the lock. Explanation offered. Then, said one, “Cleddau! That’s another Cleddau. Where are you from?” So Boatwif went into the Rivers – Milford Haven – Pembrokeshire routine when one interrupted:

” Well, there was a Cleddau at Kerridge!” But this is the one and the same boat! These boaters’ boat is moored at Kerridge and called – Kerridge. Our long October – April refit had not gone unnoticed. Conversation continued, he the Hon Sec of the Macclesfield Canal Society, the Canal Society’s badge recognised as displayed on our front window.  Wonderful Wayne and TrustyTim, Cleddau’s refitters, had waved these boaters off from Kerridge just last Saturday.

Part Two: Stratford-upon-Avon and the RSC

This is a town “of many parts”. There are the usual useful shops, Boots, M &S, Sainsbury’s, WH Smith, Debenhams; there are the less common but equally useful (to us) shops like Robert Dyas and Lakeland; there are antique shops with masses of stock, gift shops, souvenir shops, smart fashion shops with stock discounted to (still) high prices. So that’s the commercial side. Then there are those properties or areas which are old, understated and usually with few people around. But the crowds gather and surge towards and around the honey pot sites, the Shakespeare Birthplace, the Hall Croft gardens, the Bancroft Basin, etc.  How many times did the Cleddau crew find themselves within a horde of Japanese or Italian or Korean visitors! Boatwif yesterday embedded herself within such a group, whose leader used a rolled umbrella to conduct traffic to a halt and pedestrians across a road…

For Boatwif it is the theatre which is the magnet. Now this wonderful new building (but with some parts still old) is open to the world.  Eighteen months ago we had observed the huge cranes, the plentiful scaffolding and the vast hoardings. In January this year the building was in its pre-opening state and we had enjoyed a guided tour.

Now visitors and audiences can flow comfortably between the various levels, out onto the terraces, and through the Colonnade to the Swan Theatre. Where formerly this place seemed tight, cramped, stuffy, extremely exclusive now it is open and inclusive to all. During a performance two large screens in the vestibule show the on-stage action. Boatwif drifted through yesterday afternoon and gazed uninterrupted at the Lady Macbeth sleepwalking scene, then playing in a matinee.

But what of the two productions we saw? On Wednesday night – Macbeth. This was a brilliant and bloody production. Very few stage props, but the great square thrust stage, its four runways which lead out through the seating and the upper stage were all used to tremendous effect. Music was provided by three on-stage cellists, there was much use of off-stage drums, distorted voice effects and the ability to “fly” actors down onto the stage. Hence the appearance of three tiny limp figures overhead, children playing the witches, was quite extraordinary. To explain how these child actors were very prominent in the rest of the play would take away the surprise effect for any future audiences. See it if you can.

Thursday night: The Merchant of Venice. This production is riveting! Set in Las Vegas (yes, Las Vegas!) it opens with a thrilling atmosphere-building scene in a casino with singers, dancers, croupiers, stereotypical American types and a very convincing Elvis impersonator. The stage trapdoor is used to tremendous effect but perhaps the funniest moments were achieved by an oblong of light in which passengers rode a lift to various hotel floors. Most memorable was the trial scene towards the end, which left nothing to imagine about Shylock’s demand for a pound of flesh.  Most of the audience seemed as engaged and enthralled as us, although the Captain spotted one unimpressed face.  Choose this production to see for its innovative interpretation, but also its visual and emotional impact.

After topping up the water tank this morning it was an early start from the river side, bidding farewell to what had been a glorious mooring spot right opposite the RSC theatre. The boat passed through the last double lock for what will be a while.  On the graceful (fairly new) lock bridge stood a group of Japanese visitors, whose help with the wayward gates was gratefully accepted.  On across the basin we cruised and under the narrow bridge onto the canal. All was going well. Then, moments later, all came to a stop. A BW barge was in the first lock, repairing brickwork around the steps. An hour and a half later,  the labourers sustained by cups of tea supplied from Cleddau, the work barge emerged. A queue of northbound boats was beginning to form.

Not much further on, in a bridge hole, the boat ground to a halt, stuck in the mud; she had plenty of power – not much water. Then ensued much bow-hauling, rope-tugging, steel-shoving. British Waterways attended: water was poured down from the pound above and, eventually, Cleddau moved again. On we went, slowly, a mysterious rattle developing as a line of moored boats was passed…  As delays go for lifting the weed hatch and hauling out debris this was a swift operation. But the Captain, fatigued now, and influenced, no doubt, by two nights of observing particularly fine stage-strutting, yowled “Is this not Friday the thirteenth, sent to torment me…?”

At last Cleddau reached Wilmcote, seventeen locks behind her. The village is nearby and after some recovery time a walk had to be taken to see Mary Arden’s House, because it’s there.  Except that the house long thought of as Shakespeare’s mother’s house was not hers – apparently  it’s not quite old enough! But the one next door now seems to be hers…  It was an interesting ramble, two houses and a farm set in 1574, and in one house Tudor meals are cooked for the staff each day: today’s menu was potage followed by fish and bread, then quince tart.

The timer rings, the Captain (Chief Catering Officer) orders attendance in the galley: amongst other foods on offer this rainy night are potato wedges, which were absolutely not available in Tudor times!