Into Northwich – twice.
What comes to mind when you think of Cheshire? The Cheshire Plain and Jodrell Bank? Cheshire cheese? The Cheshire Cat? Extravagant footballer houses? The Cheshire hills which abut the Peak District? The Cheshire set? None of these images remotely coincides with the area around Northwich.

Northbound beyond Middlewich along the Trent and Mersey Canal there are several areas (lagoons) of wide shallow water, the result of subsidence.

of the New Cheshire Salt Company which specialises in water softeners. Gantries and pipe bridges span the canal,

and steam hisses and whistles and belches from stark structures. 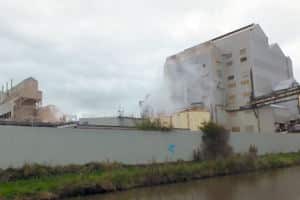 This part of Cheshire doesn’t have the eye appeal of fields of dairy cows or of distant lines of hills yet it has long played a vital role in the country’s economy. Remember the harsh winter (2012/13) when there was a hue and cry about insufficient salt for the roads? Well, it’s from hereabouts that it comes. Since Roman times salt has been extracted from the Cheshire salt mines and the effect of the extraction is related to how Northwich town looks today.
The second approach Cleddau made to Northwich on this trip (Sunday afternoon) was from fifty feet lower (more about the drop to the Weaver Navigation via the Anderton Lift next time). Since the one previous Northwich visit (April 2012) there seems to have been a great deal of regeneration alongside the river.  There’s a Waitrose now, a smart new marina and a vast development underway of retirement and assisted living apartments.

Currently road and pavement users alike are being driven to exasperation point by yet another pedestrianisation scheme.

Is there a town with a greater proportion of black and white timbered buildings?

The main street curves gently uphill. The eyes take time to make sense of it: the black and white timbers, the brick infills, a strip of sixties flat-fronted shops, a thirties cinema, 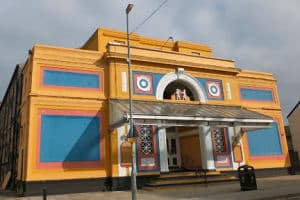 boutiques, pound shops… And then, carved into some thoughtfully placed street benches, there is a clue: this is a town which has had to rescue bits of itself time after time after time. This bench seems to be a summary:

BRINE PUMPING & ROCK SALT MINING c1700-1928; SUBSIDENCE FROM 1850; STABILISATION 2007
One next to it conveys the horror of these repeated problems:

THE GREAT SUBSIDENCE DEC 6TH 1880 FOLLOWED BY A SERIES OF DEVASTATING COLLAPSES
Some buildings were jacked up, but over the road a blue plaque attached to this building (the RAOB Hall) explains that this is the best example of the architect’s “ornate timber-framed liftable buildings”. “Liftable” – unusual word, a solution for unusual circumstances…

A visit to the Salt Museum to learn further couldn’t happen (it’s closed on Mondays) so Cleddau and crew headed back downstream to moor in the Anderton Country Park.

Uphill (look at the steps)

a mainly dried out pond

but apparently a haven for all manner of birds, some resident throughout the year, some summer visiting birds, some winter visitors and some which pause during seasonal migrations.

So far Cleddau has cruised just a few miles of the Weaver Navigation.

There’s more to do and to see – but that’s after Tuesday’s project, a ‘Top of the World Tour’ of the Anderton Boat Lift.  More later…