Tourists in Liverpool (2) – or Birds, bells and books

With so much to see in Liverpool where to start and what to investigate?

The Maritime Museum is but a minute’s walk from the boat moorings in Salthouse Dock. From here two zany archaeologists

led a walk past fountains representing tide heights to a site below the streets of Liverpool One.  Here was the Old Dock,

unearthed in 2001. Below the streets visitors see a brick wall on top of sandstone layers – but the tour treats them to a lively history lesson delivered with quick talking passion and sharp humour by guides Danny and Jazz. Here in Liverpool this was not the only time or place where passion, humour and wit characterised a commentary or an informative talk.

The Maritime Museum throbbed with school pupils of English and French nationalities on Tuesday morning. Predictably perhaps the galleries devoted to the loss of the Lusitania (7th May 1915)  and Titanic (April 15th 1912) were very popular. Look around though for memories of some proud moments – the Tall Ships in 1984 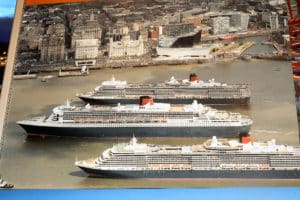 – and see if you can spot what “swallow the anchor” meant…

Liverpool (Anglican) Cathedral is vast, huge, and visible from miles away. How odd then that a ride on a number 82 bus from the bus station which would reduce the twenty minute walking time became a 35 minute bus trip out through Toxteth towards Speke… The Number 82s run frequently, fortunately – and after another long bus ride back towards the city (aided this time by a GPS voice from the Captain’s phone) the Cathedral was found.

Designed by Giles Gilbert Scott, a Roman Catholic, also famed as the designer of the very recognisable red telephone kiosk, the Cathedral was built over a seventy four year period between 1904 and 1978. Using modern materials the building is in Gothic style and the sheer height of it is breathtaking.

(Sculpture lovers might appreciate this work over the West Door, 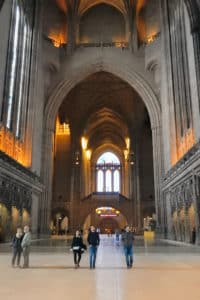 There was no seating in this area – it was extraordinary to see such an open vastness. Many of the cathedral areas are used for special events and indeed late afternoon a team of staff began to roll circular tables into the Space and set them up for a dining function. So huge is The Great Space that a quick estimate of table numbers came to one hundred…

Here is the High Altar, made of panelled oak,

breathtakingly awe inspiring. The Lady Chapel (completed in 1910) seen here from a gallery,

A guide book notes that “it is used on occasions when a more intimate form of worship is needed, such as weddings or funerals.” It seems seriously large for a lady chapel…

The Tower Experience is much promoted.  “Are you sure you don’t want to go up the Tower?” the Captain persisted, mindful of an Ely Cathedral rooftop clamber just two years ago.  Upwards then – by two consecutive lifts and 108 steps. You pass the belfry

(Campanologists note: there are 13 bells, the central one, Great George, at 14.5 tons is too heavy to be swung so it hangs in one position to be struck with a hammer). Views from the top were of course amazing: here on full zoom to Cleddau at her berth,

and here, less than a mile away to the Metropolitan Roman Catholic Cathedral.

To do only one cathedral might be regarded as discriminatory – so on Thursday a visit to the other end of Hope Street was made. 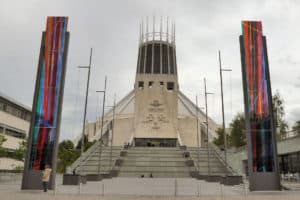 If Liverpool’s Anglican Cathedral is awe-inspiring, its Roman Catholic Cathedral is inspirational. The builds of both had suffered because of two World Wars – but here, the difference in style (completed in 1967) could not be more striking. It’s an ecclesiastical theatre-in-the-round.

There is seating for a congregation of more than 2,000 and no seat is further than 25 metres away from the altar, which is a single rectangular block of white marble from Macedonia. Above the centre portion of the cathedral floats the lantern tower,

colour flooding into the building via the John Piper and Patrick Reyntiens designed stained glass window. The side chapels are incorporated within the outer structure of the circular shape but they do not intrude into the central worship space. What a magnificent design. 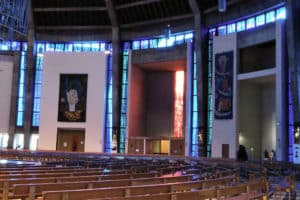 Outside the cathedral in a garden area is a circular piazza.

Overheard by the Captain was this exchange:

Not far away at all was spotted the Everyman Theatre . Liverpool is well known for its lively arts scene – and back row circle seats were bought for a 90 minute one man show (Mouse The Persistence of an Unlikely Thought) featuring Daniel Kitson. Before the performance there was a prelude –   the four bells (Matthew, Mark, Luke and John) 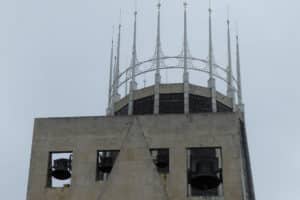 from the nearby cathedral were audibly in full swing, though why was not apparent…

From the sublime ( bells, cathedrals, comic drama) to the very different: tucked away underneath a corner of the Albert Dock is The Beatles Story. In great detail the life stories of John, Paul, George and Ringo are regaled. Not to be missed of course is a reconstruction of the Cavern

or the yellow submarine.

An on-board visitor on Thursday (you know who you are Jane!) insisted that the Central Library MUST BE SEEN. This entailed a walk to the Cultural Quarter 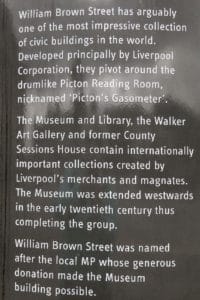 where recommendations to see the Central Library are absolutely right. (Do look at the images here ) To approach a library over much loved book titles seems entirely appropriate.

Then to enter a light-filled sleek interior, 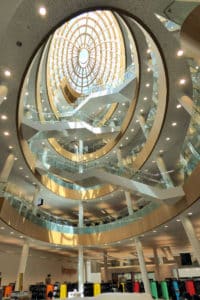 to see four floors of modern and treasured books, archives, computers, work stations and study carrels, is a joy. Upon a wall near the front door a long list of Liverpool “firsts” is mounted.

On the floor, on a shape mirroring the geodesic dome above,

is written Liverpool The Daughter of Merseyside (see here for full text)   Incorporated into the modern rebuild is the beautiful circular Picton Reading Room (1879) and the circular Children’s Library below it. Two walking trains of nursery tots emerged from the Children’s Library – how deservedly popular and widely used this entire building is. Look how civilised we are, it says, look what we achieve here in Liverpool…  (If interested in the redevelopment of the library buildings see here  ). 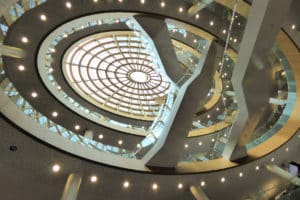 Next door to the Library is the Walker Art Gallery. In a quick whizz round this one item stood out to be photographed: a loophonium 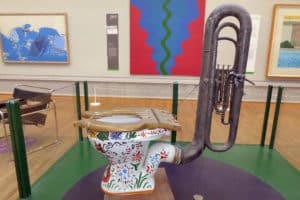 Not far away, deliberately built to impress travellers arriving at Lime Street Station, is the Neoclassical St George’s Hall. If crime and punishment 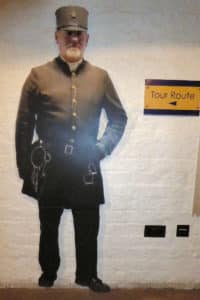 is your passion this is the place to visit. However, the fine floor (preserved under three layers of covers) and the tunnel vaulted ceiling of the Great Hall deserve a look too. 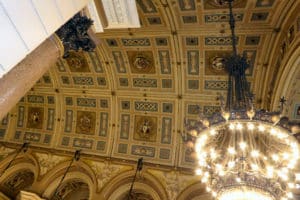 By Saturday time was running out. Welcome to the Museum of Liverpool says the overhead sign. 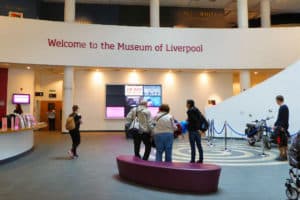 What a welcome – here is a striking new building (2011), built for visitor crowds.  There are lockers to store wet gear (yes, caught in a downpour), a visiting choir was ready to perform, there was a carriage from the overhead railway, a gallery “The People’s Republic” devoted to social history – and more.  Liverpool is much used as a location for films: here was Hagrid’s motorcycle and sidecar

from the film of Harry Potter and the Deathly Hallows… Up on the top floor, within sight of the famous Liver Birds 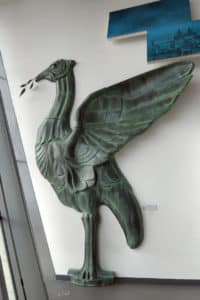 Birds – a long wander around the docks and alongside the Mersey reminds you that this place is what it is because of the river and because of the sea. 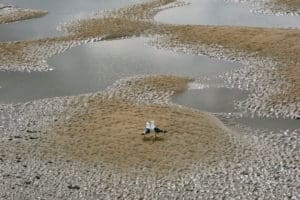 – and the next day Cleddau picked her way back through the docks, through two locks and three tunnels, out of salt water and back onto the Leeds and Liverpool Canal.

19 Miles, 4 locks and 8 swing bridges after that it was time for a break and a mooring at Scarisbrick Marina. (If you know your coastal locations you may have heard of Southport – Scarisbrick is about 4 miles inland from this Lancashire seaside town).

Until the cruise resumes…