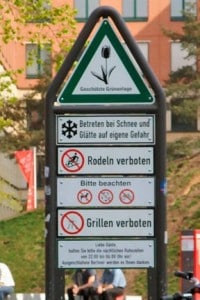 Cal Son and Techno Son-in-Law had conspired between them to ensure the Cleddau crew kept a vow made in spring 2000: to make a return visit to . They had provided some flight funds, a Lonely Planet guide book and a three hour documentary presented by Matt Frei. Then had begun some persistent nagging: “When are you going to ?”   In March the Captain picked up the guide book, disappeared from view and later announced: “All booked – we’re going by train.”

First train was the 0630 from to St Pancras, cram-packed with commuters. We were squished in the lobby, an Australian family, inbound from only four days previously, attached themselves to us. Not the glorious roofline or soaring brickwork at St Pancras impressed the Australian teenager, just the enormous Olympic rings. “Oh, cool,” she breathed. We scuttled together downstairs, passed through airline type check-in procedures and sat as a three generational family until our train was ready for boarding.

The train whizzed through , was through the Channel Tunnel in 21 minutes and made a first stop at . Visual differences? Flatter countryside, distinctive cap shapes of the platform staff, slender church spires and italicised road signs. The grey and black concrete of railway station was enlivened by spring posters, motifs and flower displays; and stations too displayed visual witty floral displays. For efficiency and service the German trains score most highly; we cruised smoothly at 250 kph (as shown on the carriage electronic screen) and were brought complimentary chocolates and hand wipes. It was 10pm local time when, four trains and fifteen hours after leaving home, the Cleddau crew fell through the Berlin hotel doors; after a battle with a hi-tech door locking system they fell too into their room – and slept…

Fuelled on Friday by a substantial breakfast and some directions we headed off to Die Post, and as on Monday morning in Macclesfield, queued … Once Easter cards had been dispatched to California we wandered, recreating parts of a walking tour taken eleven years before: along the very stylish Kurfürstendamm, prime shopping street, past the Berlin Zoo, out past the Diplomatic Quarter (where lots of flags and a protest encampment marked out the Syrian Embassy), strolling along park side avenues, just glad to be walking and not sitting! Berlin is a city of many parts and many pasts. There was the impressive (19th century) Victory Memorial, centre of a traffic roundabout now, and the wide avenue which leads past the enormous hulk of the Soviet War Memorial. From behind it a PA system relayed an urgent speech-delivering voice. Then some chanting drifted on the air.  Along the quiet avenue police vehicles gathered. Further on, at the Brandenburg Gate and round the Reichstag (Parliament building), crush barriers were plentiful, green uniformed and riot police very visible. Meanwhile student tour groups swarmed around, visitors of all nations jostling to gaze at and photograph the iconic Brandenburg Gate.

We strolled away from potential trouble, down the glorious Unter den avenue, fine embassies, museums and universities facing each other across the boulevard. Then we arrived near Bebel Platz, three sights near here to be revisited. The first was the Käthe Kollwitz sculpture of the mother and her dead soldier son. Secondly, the pavement plaque and view below of the empty library shelves, site of the 1933 book burnings. Thirdly, in a corner of the square is the copper-domed Roman Catholic Cathedral (nickname: the Tea Cup) rebuilt in the Soviet era and furnished in modernist brutal style.

It was time then for the Captain to utilise his navigation skills. Via visual reference (the River Spree) and city maps two further quests were accomplished: the location of an appropriate river boat trip and the acquisition of cross city transit tickets. Along the way eine kleine Beer was had, with a light lunch (spinach tart on tomato soup) – and a near engagement with the police flashing lights.

On Saturday morning Boatwif and the Captain set off early, along the freshly washed streets, heading for the S-Bahn to reach the 10am boat trip. Tickets bought we surveyed the boat, empty of other trippers as yet and moored right opposite the Bertolt Brecht Theatre. A strident contingent of Spanish ladies arrived to share the upper deck with us until driven below later by the keening wind. Boats of all kinds ply the river and canals of Berlin, dozens of trip boats, working barges, sleek and glitzy water-borne bling palaces, weekend plastic boats. Somehow they make way for each other at the many bridges and the 300 feet long locks accommodate all-comers at once. We cruised past museums and domes, spires and buildings (new, old, rebuilt in folksy style, ultra-modern). These last shapes had sprouted up behind and opposite remnants of the infamous Berlin Wall.  Especially on a bright spring day the eyes feel assaulted by shimmering glass, acute angles and the ever present street art or graffiti which adorns so much of the capital’s wall space. The boat continued on past the Reichstag, past seven white crosses, memorials of those who’d lost their lives swimming to freedom from the eastern side, past the Federal Chancellery (nickname:” the washing machine”), past beach areas and government buildings, on down to the baroque Charlottenburg Palace.

A stroll around the formal grounds of the palace restored warmth to chilled limbs; then, courtesy of the U-Bahn the next destination was Alexanderplatz, a hubbub of shops, markets, bier fests and outdoor social space.  Here the Soviet regime had installed a prestigious 368 metres high TV tower. Now, once you’ve queued for your ticket and waited for your time slot you can queue for the turnstile so as to queue for the lifts! Then, whoosh, up it goes in 40 seconds and the view is immense, 360 degrees out to the horizon across this flat city. Airfields, historic buildings, the waterways, tower blocks, trains and trolley buses all viewed from above as if part of a painstakingly perfect German model!

Berlin now is a cosmopolitan and vibrant city. But its twentieth century past is not far from discovery. A visit on Sunday to Die Neue Synagogue provided insight into the Jewish experiences of the 30s and 40s, the artefacts and practices of the Jewish religion and more city-wide broad views from the rooftop golden dome. Back then towards the river (and a bit more boat watching) for a morning coffee before another delve into the recent past. Ever wondered what a Trabant feels like to sit in? (Answer: cramped and uncomfortable). Ever wondered how the East Germans taught their children?  (Answer: used pictures of tanks to learn counting and model grenades for ball-catching practice). The uses hands-on exhibits so you can feel the ersatz coffee beans and touch the synthetic textiles.  Much worse, behind an actual smokescreen the much nastier side of life behind the Wall is revealed.

One last place to go, a return trip to Potsdamer Platz. The Berlin population was happily on the move on the underground trains on Sunday afternoon. Eleven years ago this huge area was desolate, apart from huge clouds of dust, some cranes and a few hoardings offering promises of a spanking new commercial district.  Here in a barren area the Wall had brutally divided west from east, but although pavement markings and a section of wall record it, around the square have sprung up glistening towers and prestigious office suites. A grassy bank in one corner permits sitting and relaxation, although not much else.

So how to summarise Berlin… a great place for food, fun, sights, visual treats of all sorts, efficiency, cleanliness, cyclists, integrated transport  – and boat trips. (One tip though, do as Boatwif did, wear comfy “boat boots” for the walking…)