Cleddau‘s been down the Caldon Canal, (nearly) to the end and back again… The Caldon Canal was opened in 1779, its purpose being to allow limestone transport down from the Peak District to the Potteries and to the Midlands.

For her first night on the Caldon Canal Cleddau had moored just below leaky Engine Lock. There had been reports of the water level being shallow along the nearly 5 mile pound between Planet Lock and Engine Lock. Waiting to work through Engine Lock on Sunday morning Boatwif noticed a C&RT chap appear, cross the footboard on top gates and gaze down at the overspill flow the other side of the lock.  About a mile further on what appears to be a small tributary is the water feed from Knypersley Reservoir. Keeping the water levels navigable is a constant duty and concern…

As the canal wends and twists into the Staffordshire Moorlands

it climbs again at the five delightful Stockton Brook Locks. Just above the bottom lock is a once impressive waterworks building: now its broken windows give it a desolate look.

But surprise awaits the first-time boater and delights a returning boater at the next two locks. Installed in 2007 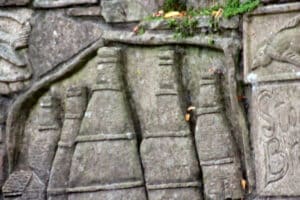 Once past Stockton Brook there is a mid-canal hazard to look out for – the centre support of a swing bridge remains, follow the arrow to pass without grounding!

At Hazelhurst Junction there are two options

– bear right to take the Leek Branch which crosses the main line of the canal on a sturdy aqueduct or head down the three locks and pass UNDER the aqueduct.

Down Cleddau went, lock by lock, heading for Froghall. There was a confusing view as the bottom lock was approached – was that scaffolding part of a construction project?

A wheelbarrow was being pushed across it… was there a Grand Designs project behind the hedge?

So had a brick bridge collapsed?

Answer unknown, but onward, past the moored boats to approach the impressive aqueduct

and cruise under the Leek Arm…

Twisting and turning the canal weaves past The Hollybush Inn at Denford, passing through woodland until it reaches Cheddleton. There are new mooring rings installed here – and one lovely open mooring. 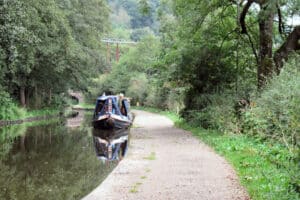 Further along is the permanent mooring of nb Beatrice, a charity boat that provides free day trips to disadvantaged children.

before dropping down the two Cheddleton Locks

to head for the tunnel to the Caldon Canal’s current terminus at Froghall.

Parallel to the canal after the locks is an assortment of light industry: “They’re galvanising metal,” was the Captain’s pronouncement.

Then to the east are the distinctive shapes of the moorland slopes, sharp, perhaps unnatural, providing a background for the long string of rolling stock that belongs to the Churnet Valley Railway. .

A mile out of Cheddleton is Wood’s Lock, “owned,” it would seem, by an unofficial but well organised volunteer. He was equipped with a box of sandwiches, a flask, a radio, a seat, a routine – and a story. “My secondary school form teacher was Windsor Davies, you know…”  There was an anecdote about This Is Your Life, though not all the detail was caught.

Onward, under an open lift bridge, to the lock that takes the canal onto the river. A weir and a small gaggle of canoeists made lock access tricky, but then there was Cleddau on a river again, the Churnet,

It’s not wide. It’s enclosed by trees with glimpses of the railway line now used by the Churnet Valley Railway.

“Remember the time we went on the train to Froghall because the river level was too high…?” mused the Captain. Yes, August 2012 it was…

The Black Lion pub, (difficult to find by road!) has plenty of outdoor space and seemed popular with customers.

“Better go slow down there,” advised a man walking his dog from the towpath. “The lock’s broken. Two boats there are one side and one on the other…”

BROKEN? A broken lock – what was the problem? What were the options?

Slowly the boat squeezed on, arriving a few minutes later at Flint Mill Lock. Here there was a familiar boat, now facing the opposite direction. A bottom lock gate would not close; all manner of efforts had been made to try to dislodge any obstruction, with no success.  C&RT had been informed but had yet to arrive… With no place to get off and lend a hand Cleddau was inched round in a turn

and some consolation was found in temporarily tying up in front of the Consall Forge Pottery.

Just as in August 2012 the potter talked and talked. Eventually, browsing complete, the unsteady gangplank was walked (yes, to re-board the boat). 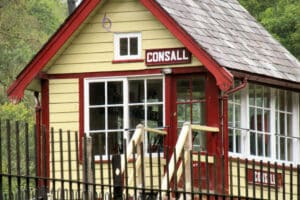 The plan to reach the Froghall Tunnel, walk over the top and inspect the small mooring basin beyond had been scuppered. A very quiet evening at Consall Forge ensued: no trains, no traffic, no radio, no TV, no signal… and that after not reaching Froghall…

It was back up the river in rain the next day (Wednesday),

and pheasants in full scuttle across open fields.

The views were of holiday cottages, strange hillsides, woodland copses, then there were those twisty bends near Denford, Back under the Hazelhurst Aqueduct Cleddau cruised, full steam ahead for the three Hazelhurst Locks… But with the canals very busy progress was at the rate of the slowest operator…

Finally and very slowly Cleddau climbed back to Hazelhurst Junction,

closely observed by some men from a walking group…

A route in reverse can be just as interesting as when first seen: it was early on Thursday morning when the Stockton Brook Locks were descended: there was time to notice more detail

and take a second look at the old pumping station.

Permission was sought – and granted – for a pop into the Emma Bridgewater site at Hanley (there’s a tiny garden oasis here in this very urban area). To look at colour

Through Hanley Park then, with glimpses this time of the ornamentation on the top of the bandstand.

Etruria: down the two chambers of the Staircase Lock, past the Industrial Museum and bear right back onto the wide Trent and Mersey Canal.

Relief! Tales of worryingly low water levels on the Caldon Canal were not inspiring confidence…

There was an unplanned stop not far past Burslem – the engine stalled, the weed hatch was lifted, the sharp curved knife deployed – and up off the prop came a mangled anorak,

– until progress was slowed again, by a length of tree trunk firmly wedged under the bow.

Released from the tree trunk Cleddau continued until she could go no further – there ahead was Harecastle Tunnel, last convoy of the day already departed.

The south portal of the tunnel is a pleasant area for an overnight stay: there is information about the two tunnels, the first one constructed by James Brindley,

the later one constructed by Thomas Telford is the one now in use.

As for tunnel passage the next day: “Either 8 o’clock or 9 o’clock,” said the Duty Tunnel Keeper. “It depends which side has the longest queue… Best be ready for quarter to 8…”

Next time: Trouble at t’locks