Twos – and a downward Three

It’s Numbers Time – end of Phase 6 of the Summer Cruise. When Phase 7 starts it will be a solo operation as Cleddau will spend a fortnight in Milton Keynes, while Tentatrice needs to be heading north again before then.

For the record since departure on 22nd May from the Macclesfield Canal home moorings Cleddau has cruised 533 miles and been through 381 locks.

It was on Tuesday (8th September) that things first seemed to come in twos: still up within sight of the Chiltern hills 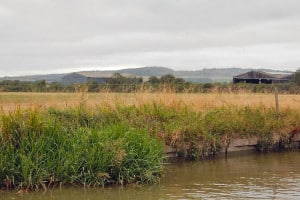 the two Ivinghoe locks were at the start of the day. Downhill the boats came on a grey morning. While filling the water tank at Slapton Lock two walkers paused to talk. One lived at Brentford, at the southern end of the Grand Union. What lay ahead along the towpath, she had wondered. North of Watford was unknown territory to her. So with a rucksack each she and a friend are walking along the towpath, to its northern end at Birmingham.

Three (single) locks further on the canal had dropped past old sandpits and wharves to Leighton Buzzard. Somewhere around here was moored the unusually named Long in the Tooth, a fine two tusked elephant painted on the back cabin. 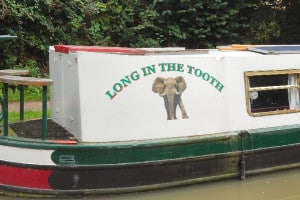 Here too there is the most convenient of shopping stops, a stretch of Two Hour Shopping Mooring right outside a Tesco Superstore. Very handy!

There are trains in these parts – you might hear them both. To the west of the canal on the West Coast mainline, Virgin trains whoosh by, while on the eastern side a steam toot was a reminder of the 4.5 mile short stretch of the Leighton Buzzard Railway. It’s a narrow gauge railway, relic of the sand industry, these days running summer time pleasure trips .

A mile or so further, past the immaculate Wyvern hire boat base 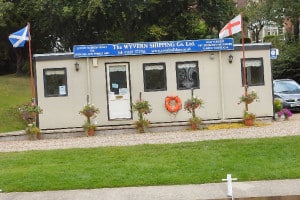 and Leighton Lock, was the night’s destination. This was the second canal side pub of the day. The first pub had been The Grove Lock pub 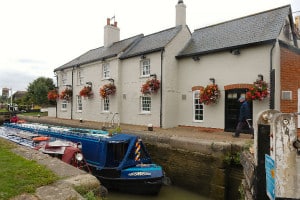 A couple of decades ago this was a lock side cottage and BW yard, now it’s an attractive flower-bedecked pub. (Look, an Ordnance Survey benchmark in the Grove Lock wash wall.) 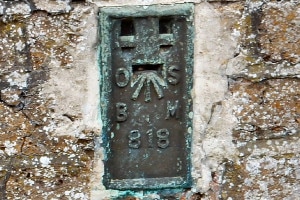 Number two pub had a reputation to live up to: the Tentatrice Captain (in his days as Cleddau’s Relief Captain) repeatedly claimed that there was an underwater magnet that compelled boaters to tie up outside The Globe  . But the magnet seemed not to work: an underwater obstruction made it impossible to tie up directly in front of the pub, as had always been possible in the past. (What is the theory about opposites attracting and like poles repelling…?) The pub frontage is no longer a vivid picture of brightly coloured hanging flower baskets and large flower-filled tubs. Instead cool, easily-maintained tubs of greenery surround the newish outdoor seating. 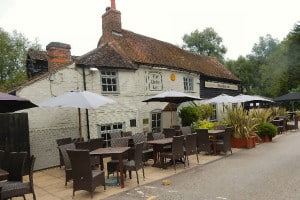 Whatever its shortcomings these days The Globe is a great place for meeting friends. Two fellow Wednesday Walkers drove a bit further afield from Bedford, had a cruise, a workout at the Soulbury Three 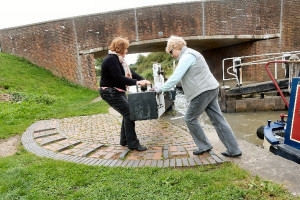 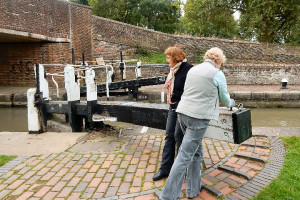 and some lunch on board, before undertaking the nearly three miles walk back. 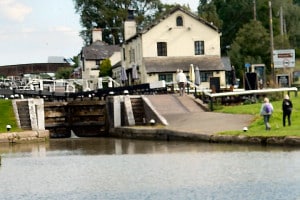 It was great to see them both again.

“Look out for the second Dutch barge below the lock, and the garden beside it,” Boatwif had advised the Tentatrice crew on Thursday morning. Yes, there it still was, a beautiful vessel. 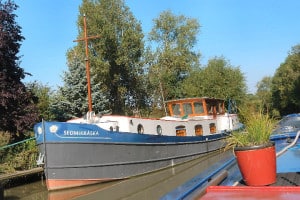 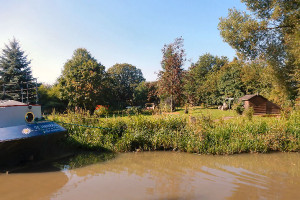 Between Stoke Hammond and Fenny Stratford breasted-up boats (two boats side by side) became a common sighting. Jules Fuels drew up alongside. 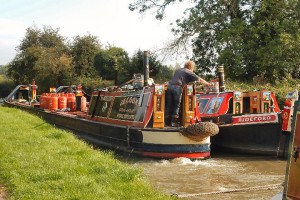 This boat pair trades along the canal between Stoke Bruerne and King’s Langley selling diesel, gas and coal. With chillier times coming a couple of bags of coal were bought. Will it be enough to see Cleddau back to the Macc by mid-October…?

An hour later, just below Stoke Hammond Lock, another pair of breasted-up boats caught the eye. Facing in opposite directions (and minus an engine on the longer 70’ boat) the two were being turned round – slowly. A barge pole was in use, the rudder of the longer boat firmly stuck in the silt. 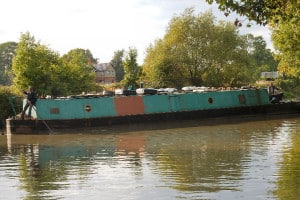 After much physical and engine effort 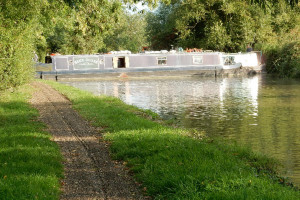 A day later there was another pair of fuel boats 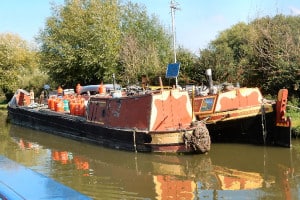 – and then not far beyond Fenny Lock, a bridge hole ahead was totally blocked, or so it seemed. 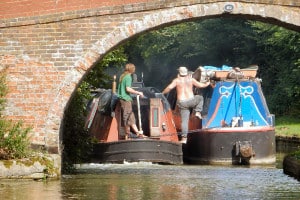 Ahead, oh so slowly, a pair of boats was being moved. It was another one engine/two boats operation.  The day was warm and there was no great hurry. The procession dawdled onwards – the paired boats, Cleddau, Tentatrice. 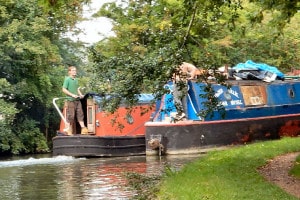 From a canal side garden two observers watched the slow progress. “Cor, that’s as bad as following a tractor and willing it to pull over!” one said. 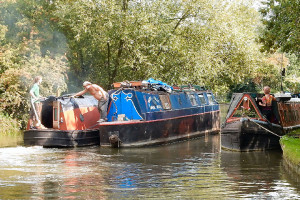 In due course pull over they did and, a few bridges later, 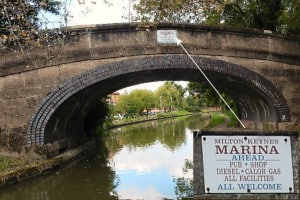 Milton Keynes Marina had been reached.

En route there had been one more “two”, 2 very shiny highly polished boats, Lydia May 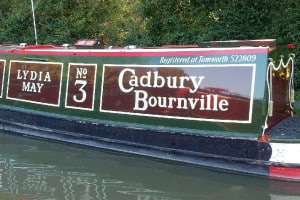 and Sidney (notice polishing activity on her starboard side). 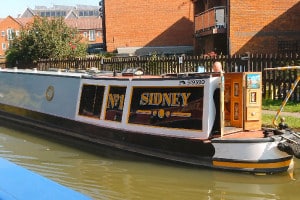 So, with Cleddau now tied up in Milton Keynes Marina, there is a pause in the Summer Cruise. 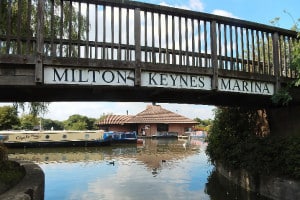 The question is – when it resumes in two weeks time will there be any summer left…?